System performance of the P20 and P20 Pro should not be something where we’re expecting any surprises. We’ve covered the Kirin 970 in detail in a standalone article earlier this year, and because the chip doesn’t offer any on-paper improvements of last year’s Kirin 960 in the P10 – the improvements in system performance should come solely based on software upgrades such as in the upgrade from Android 7.0 to 8.1 respectively 8.0 to 8.1 when comparing against the results of the Mate 10 with the same chipset. 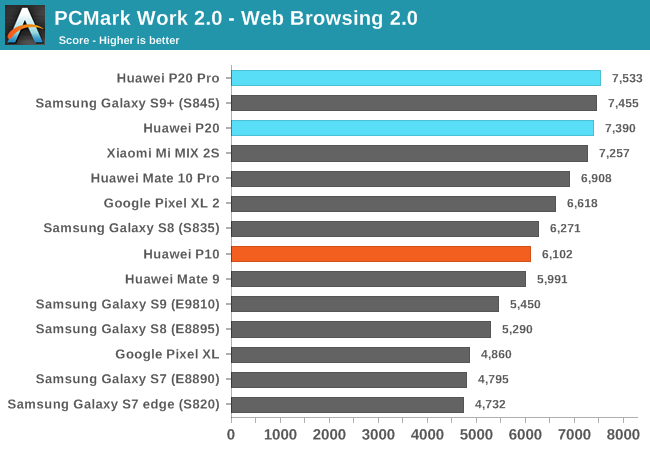 Starting off with PCMark’s web browsing test, we see the P20’s perform excellently and achieving alongside the most recent S845 devices top scores. The web browsing test of PCMark is very sensitive to performance latency, meaning how fast the CPU and scheduler ramp up to higher performance states. The P20’s use a customised variant of EAS, however still rely on an interactive CPU frequency governor. 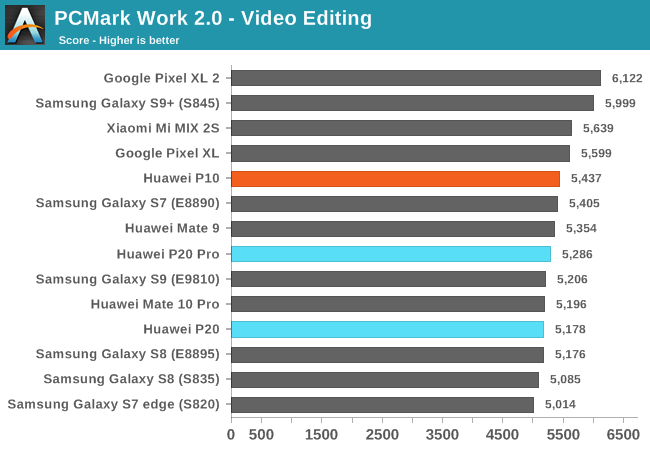 The video editing subtest seems to have reached a performance plateau in terms of reported scores in that we’re not really seeing much deviation anymore across devices nowadays – giving diminishing returns of actual performance with increased scores and why all devices are so tight together. 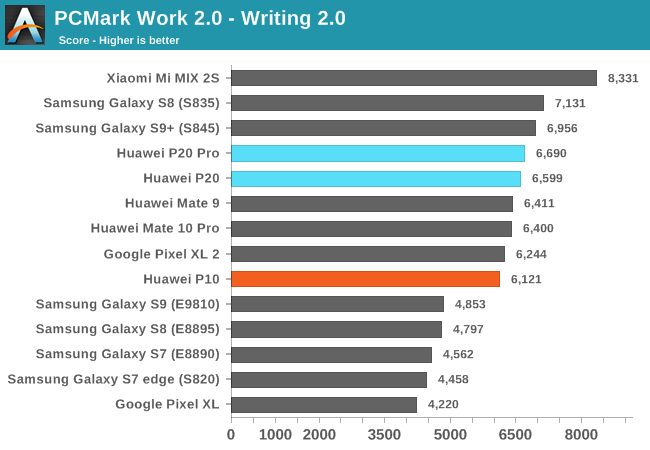 The writing subtest is among one of the most representative tests in regards to overall user experience of a phone. Here the P20’s fare extremely well again and top the charts. Only Xiaomi’s most recent Mi MIX 2S with very aggressive scheduler configurables is able to take a lead in front of the P20’s. 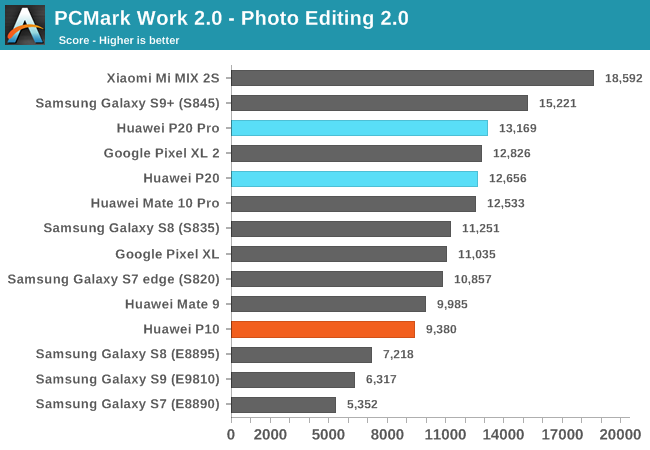 The photo editing subtest also is a very performance latency sensitive test – the workloads comprise very short but still heavy bursts. Here scheduler and DVFS means everything and the P20’s again are at the top of the ranks only outpaced by S845 phones. 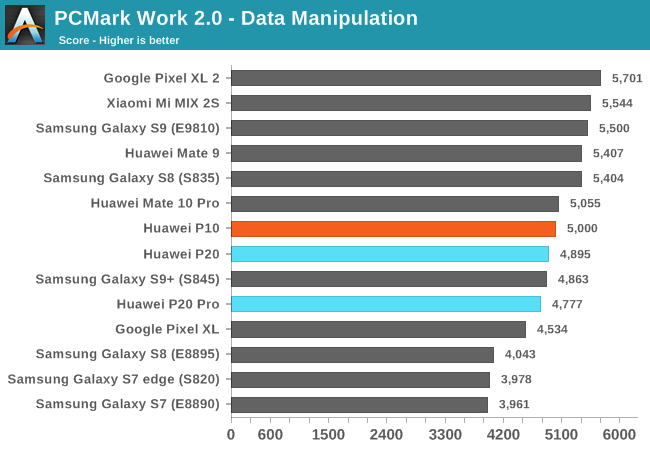 The data manipulation workload is more characterised by longer single-thread workloads that seem to be memory latency sensitive. The P20 here seems to show a slight regression – again this agrees with the synthetic benchmarks that we’ve run in the Kirin 970 article as it seems the memory controller on the K970 is less aggressive than on the K960. 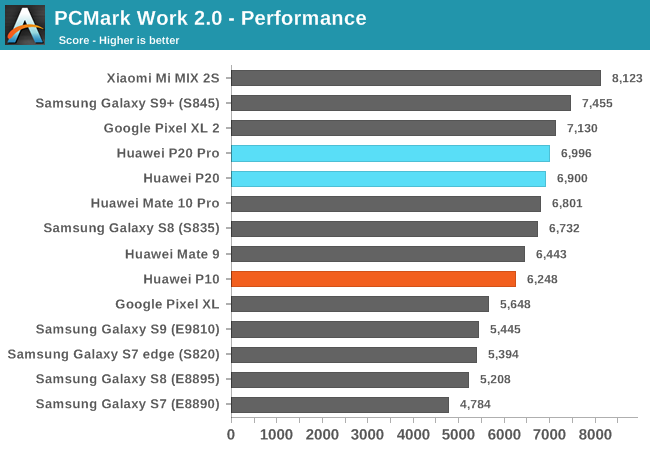 Overall, the P20’s performance in PCMark is as expected- slightly above last year’s P10 more recent Mate 10’s. Both phones are among the fastest today and only more aggressive implementations of the Snapdragon 845 will outpace them in terms of snappiness. 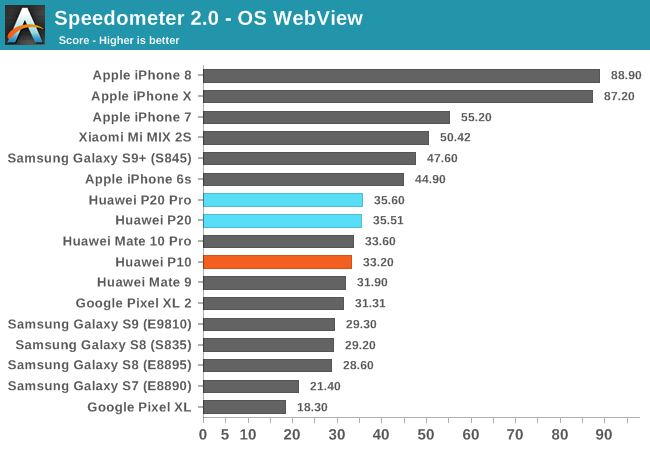 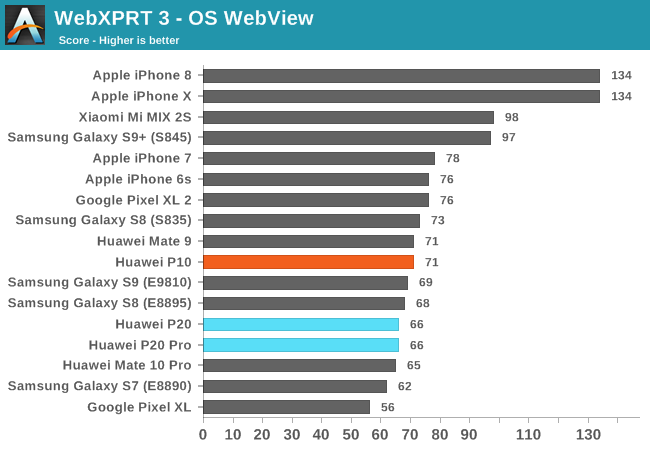 In web tests, the P20s again fare relatively unsurprisingly, taking a small lead over the Mate 10 in Speedometer 2.0 while still showcasing the same regression compared to last year’s P10 in WebXPRT3.

System performance of the P20s wasn’t really something I had any kind of expectations – and they ended up exactly where I thought they would. HiSilicon’s choice of sticking with Cortex A73’s in 2018 makes both sense, but also gives them a disadvantage in some markets.

At the beginning of the year I had thought we’d see the Kirin 970 have to worry about large performance deltas to the Exynos 9810 – however that worry quickly dissipated as we saw the fiasco that was the Exynos Galaxy S9. The Snapdragon 845 however still maintains a very noticeable performance lead and that’s where the P20s don’t look that good against. This would still be fine if Huawei would price the P20s more competitively – however that’s not the case, and in particular with the price premium of the P20 Pro we are not checking off all the boxes for a flagship device coming in at that price bracket.

Unfortunately Huawei’s is in a bit of a bind here as their SoC release schedule is out of sync with the technology release schedule, and that’s why the P20s will have to make due in other areas to compensate for the “average” performance of the Kirin 970. Again, I want to make note that both devices are still extremely smooth and subjectively still very fast devices – it’s just that by now we have competitions that are a generational leap ahead and that needs to be taken into account.