A nice addition with Samsung’s Android 8.0 OS on the Galaxy S8 and Galaxy S9 is the ability have fine-grained control over colour temperature – although it’s disappointing to see that this is limited to the Adaptive Display colour mode. The remaining colour modes continue Samsung’s tradition to provide different colour space modes. Adaptive Display is a wide gamut mode which is intentionally wide and doesn’t correspond to any standard. AMOLED Cinema targets the DCI P3 colour space, AMOLED Photo targets Adobe RGB and the simple “Basic” mode targets sRGB accuracy.

One big introduction of Android 8.0 was supposed to be the inclusion of wide colour gamut colour management support. This was enabled on Google’s Pixel 2 devices. To find out more how the Galaxy S9 behaves I wrote a quick app which check’s Android’s APIs. Unfortunately the Galaxy S9 doesn’t have any colour management support and switching colour modes through the APIs does nothing. There’s still a lot of questions remaining in terms of wide gamut support on Android, particularly for Samsung devices who make extensive usage of colour management and display modes through the mDNIe solutions on their AMOLED devices.

There’s a plethora of reasons of why Samsung could have decided not to enable support, some of them which are hardware requirements on the display pipeline. The Exynos 9810 and Snapdragon 845 both should support 10-bit display pipelines (which is not necessarily a requirement, but simplifies things) but for example the S6E3HA6 was still an 8-bit DDIC which complicates things and requires tone remapping and possibly dithering techniques. The situation is a bit of a conundrum and it’ll probably take some time before Samsung introduces a full 10-bit wide gamut software-to-display device. The Galaxy S9 for now remains the same as previous generation in terms of colour gamuts and colour depths.

And as always, measurements are performed with an X-Rite i1Pro 2 spectrophotometer, with the exception of black levels which are measured with an i1Display Pro colorimeter to achieve the most accurate results possible in an area where the i1Pro 2 can be somewhat unreliable. Data is collected and examined using SpectraCal's CalMAN software.

The Galaxy S9 and S9+ display generally the same characteristics as the Galaxy S8. Minimum brightness goes down to 1.5 cd/m² while manual maximum brightness tops out at 300-320 depending on colour mode. Auto-brightness boost in bright conditions will overdrive the panel at up to 625 cd/m² at 100 APL (full white) which is the same brightness as the S8, both in manual and auto modes.

The Galaxy S9 and S9+ units I have here still suffer from slightly too low colour temperatures both in sRGB and DCI P3 modes, coming in at around 6250K, slightly better than the Galaxy S8 unit I have which also was too red at 6150K. Samsung’s Adaptive Mode default to higher colour temperature of 7000K, however in that mode it’s a non-issue as you’re able to adjust the colour balance to one’s preference. The Galaxy S9 and S9+ showcase better total gamma than the S8 units I have here, coming in at 2.23 on the S9’s vs 2.13 on the S8.

Greyscale accuracy is good even though we’re veering slightly too much into the reds because of the under-targeted colour temperature. 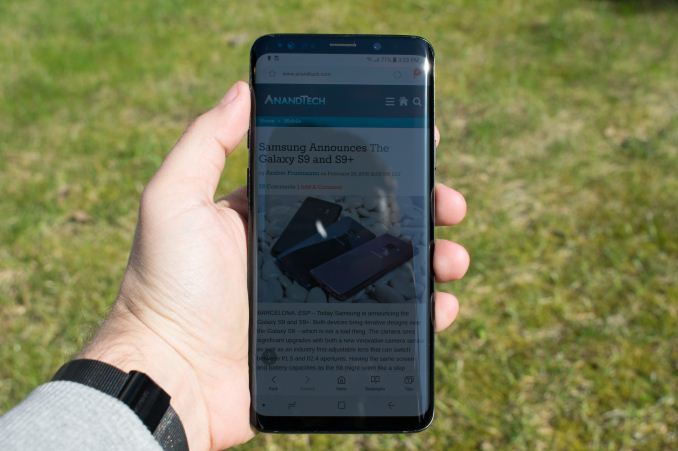 In direct sunlight the S9’s retrain fantastic readability thanks to the high-brigthness mode that the phone switches to. In this mode the display ignores the selected display mode and goes into a special very saturated and very low gamma mode to improve legibility. 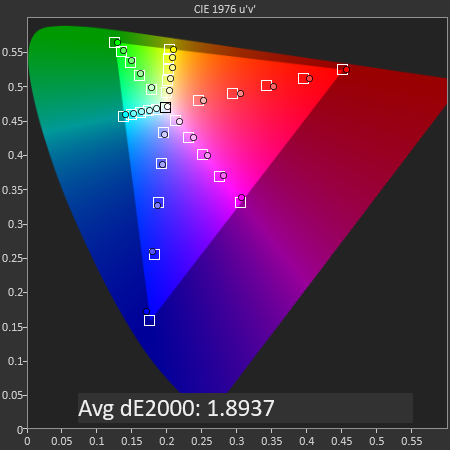 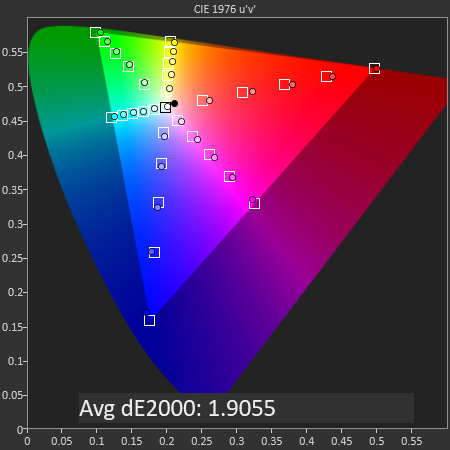 In terms of gamut and saturations accuracy the S9+ behaves excellently in sRGB and DCI P3 modes. However I did see that the mid-level red saturation points were too high and this prohibited the S9’s from reaching lower overall dE2000 figures. Because I measured the exact same deviation between the S9 and S9+ I believe this to be a calibration issue of the mDNIe profiles rather than an issue of the panels which Samsung could theoretically fix through software if they wanted to (along with the colour temperature being too red). 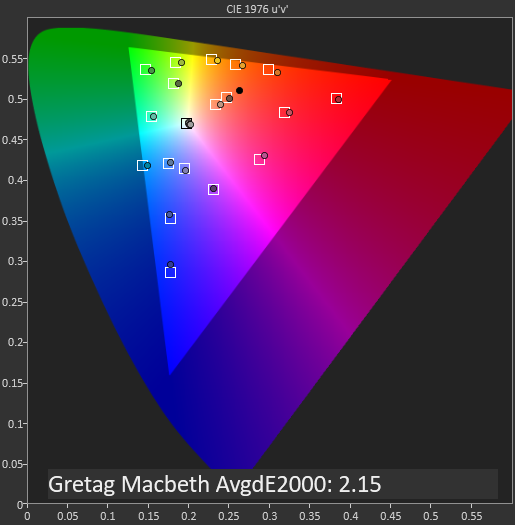 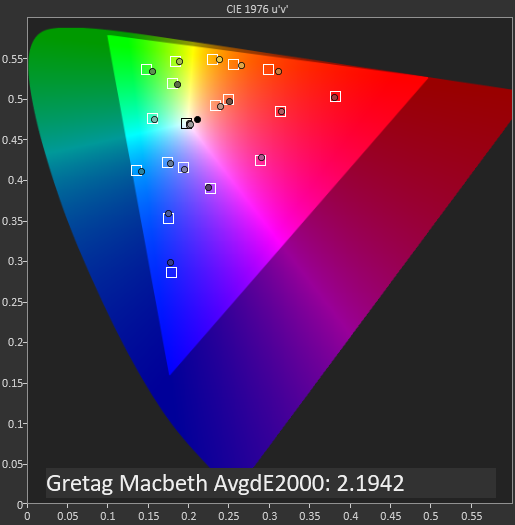 In the GMB charts the Galaxy S9 and S9+ again posted identical figures with overall good accuracy in sRGB and DCI P3 modes. Again the biggest mis-alignments here happen in the red tones are they are too saturated than what they should have been.

Something we’ve never covered before is a certain behaviour of AMOLED screens at low brightness and dark contents. Samsung has for generations had issues with transitions from complete black (pixels off) and lowest level colours. Now with having more competition in the OLED scene both from LG in terms of panels and from Apple with the iPhone X, I found it interesting to compare how the different devices behave.

This sort of evaluation is extremely hard to capture as it can’t really be measured with tools into a quantized figure. I resorted to simply capturing the phone’s screens with a DSLR at long exposure times. Alongside the long-exposures which exaggerate the brightness of the scene compared to the reference image, I also included the same image captures but with the high-lighted shadow clipping showcasing the areas of complete black of the screens. The phones had all been calibrated to a fixed 20cd/m² brightness to have an apples-to-apples comparison. 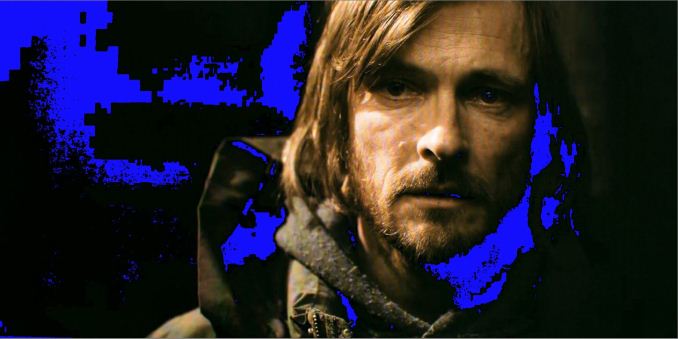 The Galaxy S9 and S9+ both are darker and more even in brightness than the Galaxy S8. This matches our measurement which showed the S9’s have higher gamma than the S8 (for our units). The Galaxy S9’s provided a better representation of the source material than the S8. There is a difference between the S9 and S9+ as the S9+ seemed to have a higher gamma or more clipping between black and the darkest areas. The problem here is that this clipping gradient isn’t smooth enough and in motion this results in very noticeable moving artefacts.

The iPhone X behaved very differently than any Samsung devices and provided a significant image quality advantage in dark scenes. When looking at the shadow clipping highlighting that Apple is doing some very fine dithering between fully dark areas and the next highest brightness levels. When in motion the iPhone X just provides an extremely good experience in dark scenes with little to no visible artifacts.

The Pixel 2 XL comes with an LG panel and DDIC. The results here are a complete mess as not only does the Pixel 2 XL have issues with the dark areas, but actually the gamma curve at low levels is far too high and this clips actual detail of the image into complete black. The LG V30 has the same issues and I hear this is a hardware limitation on the way LG handles brightness control through PWM – it’s not able to retain sufficient ADC bit depth resolution at low brightness and causes a more compressed image.

Apple’s screen also doesn’t suffer from the “purple smudging” when transitioning between black areas. This seems to be caused by a lag in the response-time of the blue subpixels, not able to shut off quickly enough. The point here is that if Apple can handle dark scenes at low brightness levels at good quality, then so should Samsung, so here’s hoping Samsung’s engineers can focus on this issue and improve it in future generations.

A big question I wanted to see an answer to is if the Galaxy S9 had improved in terms of power consumption and efficiency. As it stands, power on the S8 and S9 were nearly identical and the measured difference was within 5%. We haven’t seen an improvement in AMOLED emission power efficiency in a few generations now so I do wonder if my projection of AMOLEDs surpassing LCDs in overall efficiency from 3 years ago has actually happened or not. I didn’t have time to go in-depth in other current generation devices for this article, but I’ll make sure to give an update in a separate piece in the near future.

Overall the Galaxy S9 screens behave mostly the same as the ones on the Galaxy S8’s. The only differences between the screens that will be visible is the higher gamma at low brightness levels which slightly improve the quality. The Galaxy S9’s screens are still one of the best on the market and I don’t really see any deal-breaking issues with the phones in that regard.