It is pretty clear to see that Ryzen can be fairly dependant on memory frequency, but it depends very much on the sort of test and the nature of the workload on memory accesses. On the benchmarks where it matters, our memory kit was above to push performance up and over 20%, although despite the few benchmarks where this happened, it was outnumbered by benchmarks that had zero or a very minor effect. Some gaming titles had up to a 5-10% difference in average frame rates, but others had zero change. 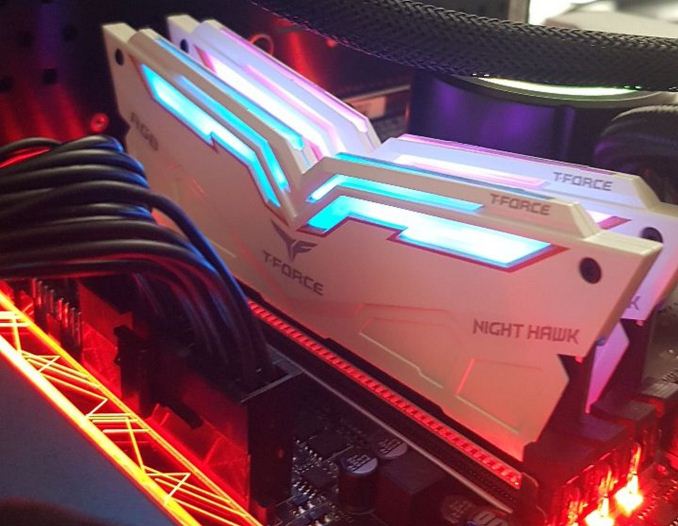 To Infinity and Beyond

Determing the sweet spot for Ryzen from our small batch of testing is not so straightforward. From our quick testing, it would seem to suggest that there are performance gains to be had, with slow progress as the data rate increases. A few benchmarks seemed to hit the performance inflextion point around the DDR4-2933/3066 boundary - or basically where the Team Group Night Hawk RGB DDR4-3000 memory kit is positioned.

Aside from the fact of having fasting memory, the speed directly adjusts the potential in AMD’s Infinity Fabric. The IF is AMD's new scalable interconnect found in the Zen CPUs, Vega GPUs, and likely the next few generations of products. Infinity Fabric connects and manages the data flow from each of the cores to each other, as well as to the additional controllers on board. But the effect of faster DRAM and faster IF, on paper, should be a mutually beneficial improvement, and one would take a reasonable guess that AMD will aim to increase both as new generations of products come to market.

Depending on how the results are digested, and how the software can effectively use the new AMD Zen microarchitecture, a relatively decent set of DDR4-3000 (or there abouts) memory seems to be a good inflection point for users that want to invest in faster memory. Obviously using tighter sub-timimgs should help as well, which we'll likely explore in a separate review.

The Team Group Night Hawk RGB memory has served our testing needs well out of the box and it seems like a very reasonable purchase for Ryzen users looking to add a high-performance memory kit. Unfortunately there is no guarantee in the quality of the ICs on board, with Team Group stating that the type of ICs could change over the life time of the product - this will mean that the overclocking capabilities may change depending on the ICs. The memory kit we used in this testing is currently available from Newegg for $173 with a white heatspreader, or $156 with a black heatspreader. Interestingly the black version running at a faster DDR4-3200 is listed at a cheaper $164, but is currently out of stock.

For other RGB-based kits running 2x8 GB at DDR4-3000 with white heatsinks, Corsair's Vengeance RGB are $180 in white or $160 in black, with GeIL's Super Luce in black also at $160. By comparison, ADATA and G.Skill offer similar kits but in black, both at the $180 price point.