The office programs we use for benchmarking aren't specific programs per-se, but industry standard tests that hold weight with professionals. The goal of these tests is to use an array of software and techniques that a typical office user might encounter, such as video conferencing, document editing, architectural modeling, and so on and so forth.

Our new compilation test uses Windows 10 Pro, VS Community 2015.3 with the Win10 SDK to compile a nightly build of Chromium. We've fixed the test for a build in late March 2017, and we run a fresh full compile in our test. Compilation is the typical example given of a variable threaded workload - some of the compile and linking is linear, whereas other parts are multithreaded. 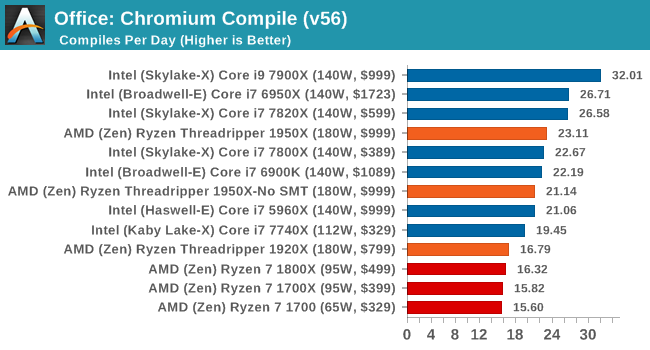 One of the interesting data points in our test is the Compile, and it is surprising to see the 1920X only just beat the Ryzen 7 chips. Because this test requires a lot of cross-core communication, the fewer cores per CCX there are, the worse the result. This is why the 1950X in SMT-off mode beats the 3 cores-per-CCX 1920X, along with lower latency memory support. We know that this test is not too keen on victim caches either, but it does seem that the 2MB per core ratio does well for the 1950X, and could explain the performance difference moving from 8 to 12 to 16 cores under the Zen microarchitecture. 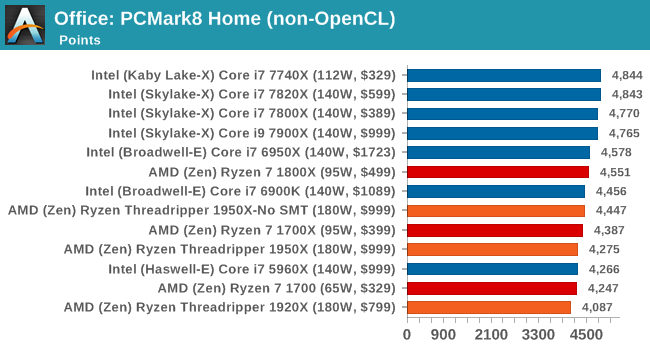 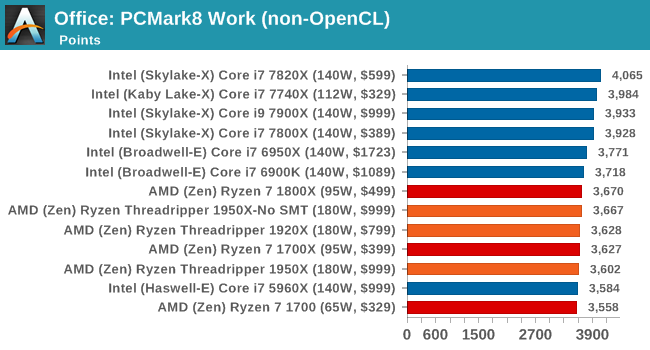 Strangely, PCMark 8's Creative test seems to be failing across the board. We're trying to narrow down the issue.

SYSmark is developed by Bapco, a consortium of industry CPU companies. The goal of SYSmark is to take stripped down versions of popular software, such as Photoshop and Onenote, and measure how long it takes to process certain tasks within that software. The end result is a score for each of the three segments (Office, Media, Data) as well as an overall score. Here a reference system (Core i3-6100, 4GB DDR3, 256GB SSD, Integrated HD 530 graphics) is used to provide a baseline score of 1000 in each test.

A note on context for these numbers. AMD left Bapco in the last two years, due to differences of opinion on how the benchmarking suites were chosen and AMD believed the tests are angled towards Intel processors and had optimizations to show bigger differences than what AMD felt was present. The following benchmarks are provided as data, but the conflict of opinion between the two companies on the validity of the benchmark is provided as context for the following numbers. 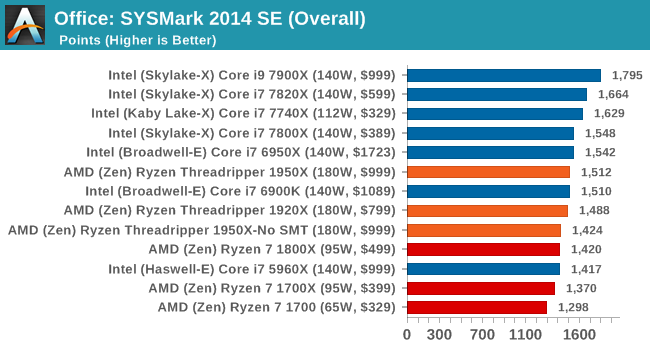