The Lexar Workflow HR2 4-bay Thunderbolt 2 / USB 3.0 hub has been in the market since July 2014, and that explains some of the dated features such as a Thunderbolt 2 interface (instead of Thunderbolt 3). The next iteration of the hub and the readers should be an interesting one, given that Thunderbolt 3 has moved to the USB Type-C connector. If the readers are also updated to a USB 3.0 Type-C interface, that should also solve the issue with the CFast 2.0 reader falling back to USB 3.0 speeds when used with the hub.

On the readers side, the CompactFlash one was a bit of a pain to work with. I actually managed to bend the internal pins by accidentally inserting a CF card improperly, and had to purchase a new one to complete the review. However, the other readers were a breeze to use. The aspect that I liked most was the ability to use the readers without the hub. In this mode, no external power is needed. The hub, on the other hand, is more suited for desktop use due to the power adapter requirements. We hope that the next iteration will go in for a more compact adapter. The hub also allows multiple cards to be accessed at once over a single system interface, though I did find some of the readers disconnecting and reconnecting under simultaneous access with three or more readers. The LEDs indicating the activity status are also quite bright, and might be an issue for some users.

In addition to the various card readers, the four-bay hub is also compatible with the Lexar Portable SSD and the UH1 2-port USB 3.0 hub. Even though we didn't take those out for a test drive in this review, it points to Lexar creating a very cohesive suite of products around the hub. 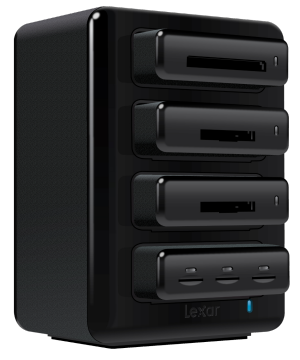 Reviewing the hub also gave us the opportunity to create a review workflow for various storage cards used by photographers and videographers. Our workflow targets the typical use-case for such cards. In addition to support for bandwidth-intensive applications such as 4K video recording, SD and microSD cards need to support usage in SBCs (single board computers), smartphones, and other embedded applications. These workloads require good random read and write performance also. These cases are handled in our accelerated aging component - the PCMark 8 storage bench. 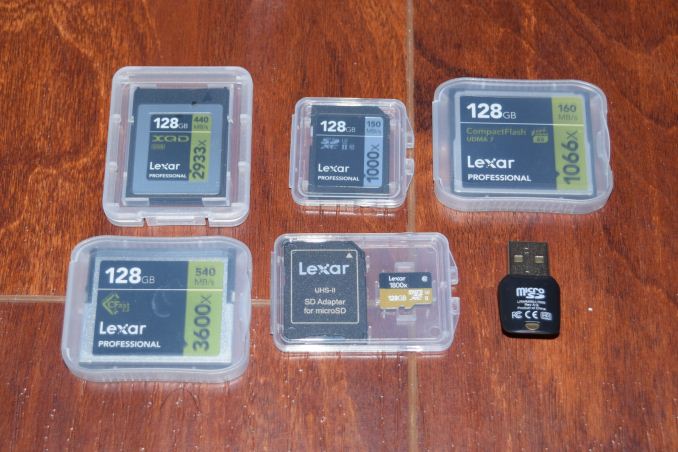 We found that the CompactFlash card has much better performance as well as consistency compared to the SDXC and microSDXC cards. Within the SD domain, it is clear that much of the focus is on microSDXC now. The 1800x microSDXC 128GB not only performs better than the 1000x SDXC UHS-II card, but, also exhibits better performance consistency after extended usage. The CFast 2.0 card was evaluated using the Thunderbolt 2 interface. It performs very similar to that of a mid-range mSATA SSD - the form factors are also quite similar. The XQD card was a bit of a puzzle - our tests revealed performance numbers that were not even close to the claimed performance numbers. We are yet to determine the exact reason behind this, given that our sample size of one card model and one reader doesn't provide us with much leeway.

In conclusion, the hub definitely eases the task of transferring data from cards on to a PC. It is sturdy, and the build quality is good. The dual interface (USB 3.0 and Thunderbolt 2) ensures that the unit is compatible with a wide variety of systems. It also helps in keeping the workspace organized, with the readers slotted into the hub even when they are not being used. The hub is definitely recommended for high-volume photographers, while the readers (that can be used standalone) are suitable for casual users. There are a number of options available in the latter market, and the Lexar readers might not always be the most cost-effective solution. Despite some quirks, the hub is a unique product. It has a street price around $200, and Lexar definitely deserves credit for bringing it to the market at that semi-professional price point.