CFast (CompactFast), introduced in 2008, is a variant of CompactFlash (CF). The main update is the use of a Serial ATA (SATA) interface instead of PATA. The initial verion was based on SATA II and topped out at 300 MBps theoretically. In 2012, CFast 2.0 was introduced. It updated the electrical interface to SATA III (600 MBps). The transition from CF to CFast has been quite slow, with most camera manufacturers believing that CF cards still offer them enough performance. CFast slots are current found in a number of high-end camera and camcorder models . 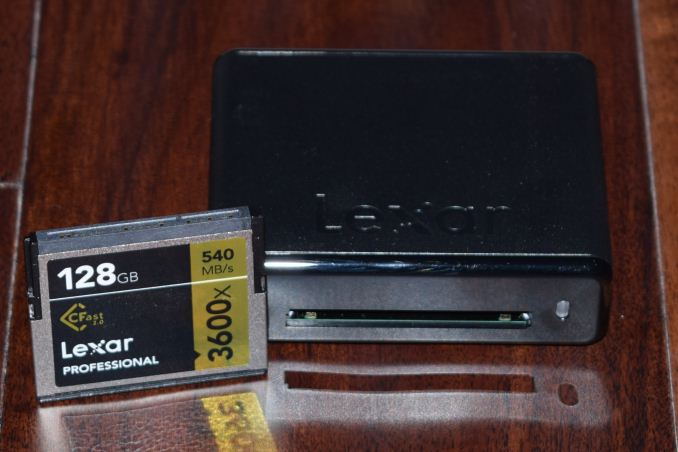 Lexar offers 128GB and 256GB cards in the 3600x series, while the 3500x series (slightly lower performance) comes in capacities ranging from 32GB to 512GB. The first CFast card to be subject to our memory card review workflow is the Lexar Professional 3600x 128GB card (LC128CRBNA3600).

Lexar claims speeds of up to 540 MBps, but real-world speeds are bound to be lower. In fact, writes can sometimes be much slower. For most applications, that really doesn't matter as long as the card is capable of sustaining the maximum possible rate at which the camera it is used in dumps data. We use fio workloads to emulate typical camera recording conditions. We run the workload on a fresh card, and also after simulating extended usage. Instantaneous bandwidth numbers are graphed. This gives an idea of performance consistency (whether there is appreciable degradation in performance as the amount of pre-existing data increases and / or the card is subject to wear and tear in terms of amount and type of NAND writes). Further justification and details of the testing parameters are available here. 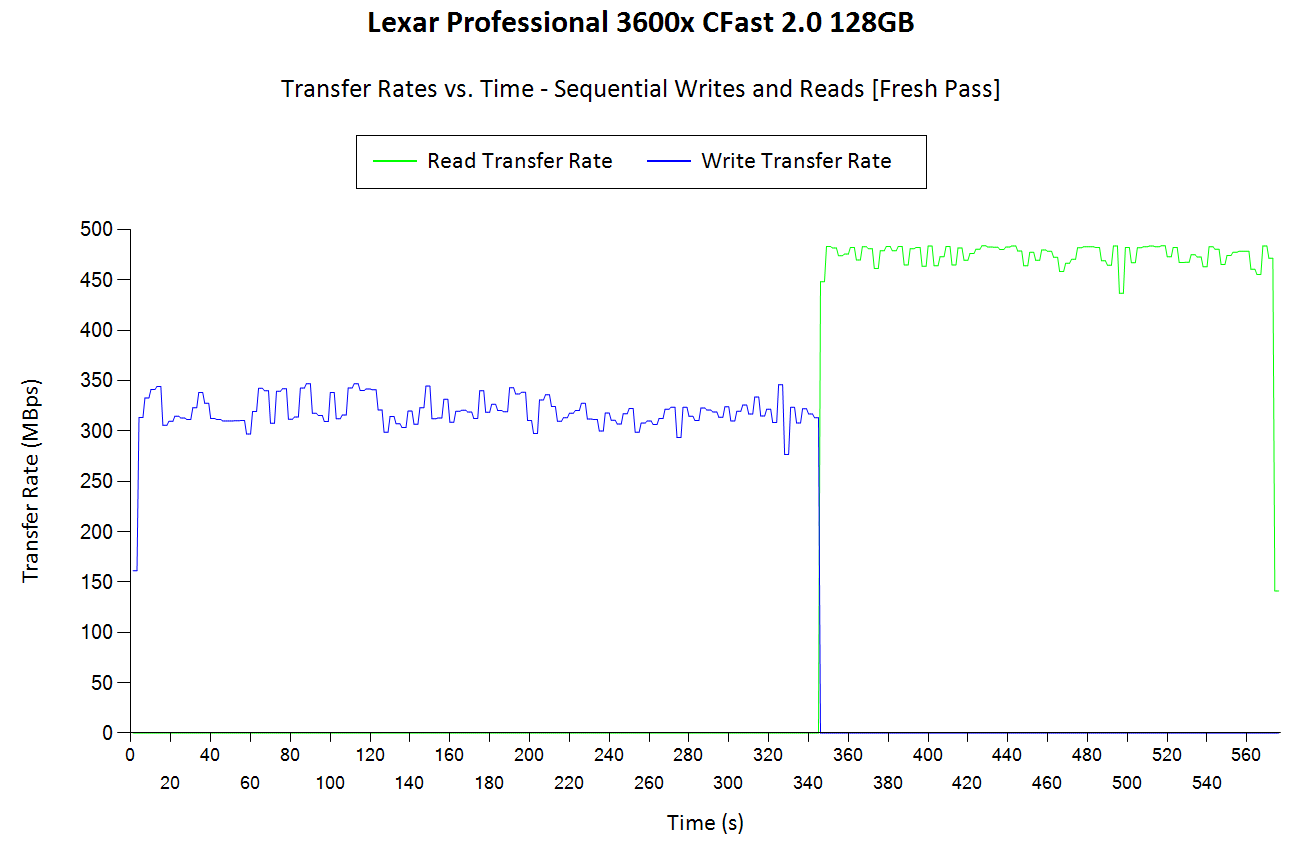 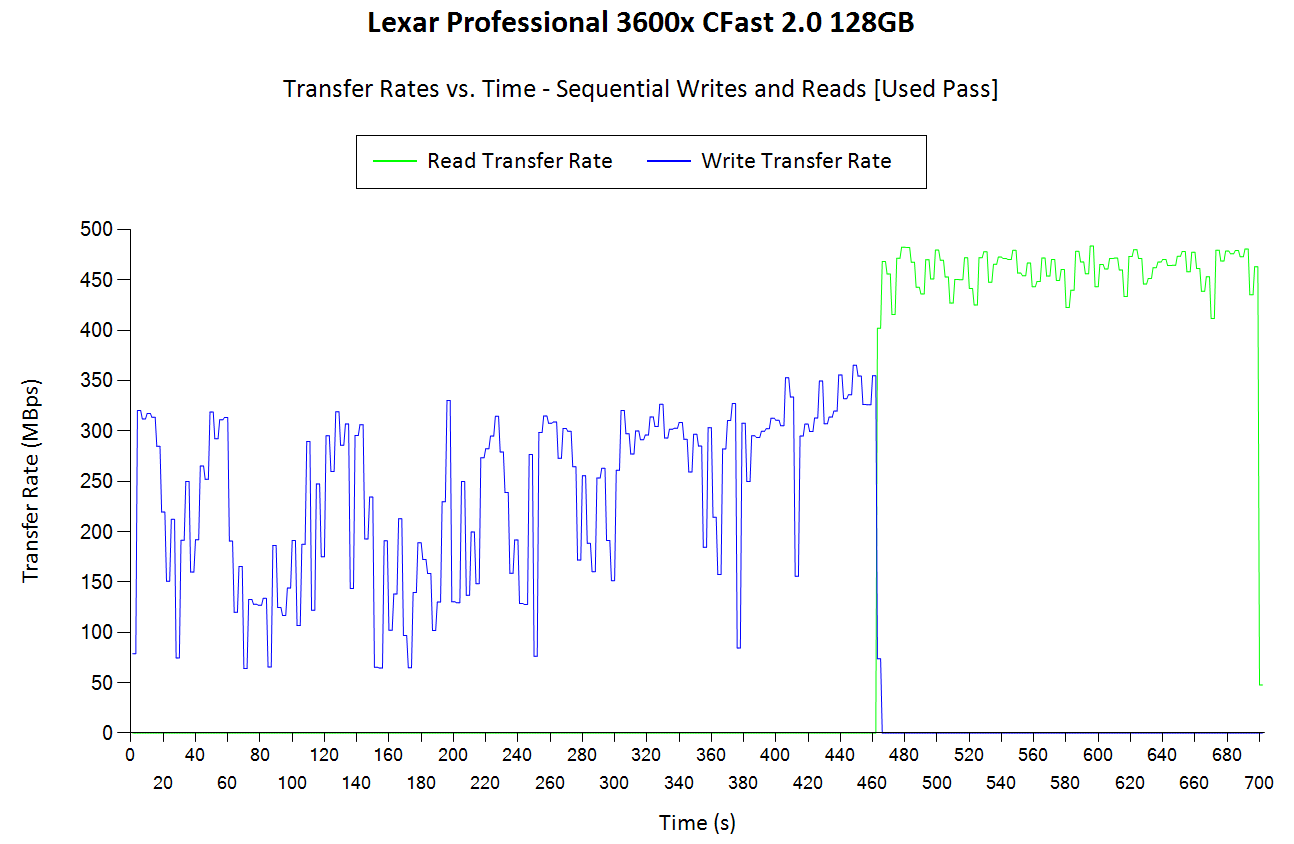 The bandwidth numbers show that it makes sense to use a Thunderbolt port to access the CFast card's contents on a PC, with the read speeds going above the practical 450 MBps limitation of the USB 3.0 interface. In the fresh state, the card seems to be able to handle sustained data rates of more than 280 MBps, but, the number drops down to around 75 MBps after extended usage. This is the main reason for the provision of the CFast sanitize tool (to restore performance) by the card manufacturers. Note that we see this performance loss only under sustained writing conditions. 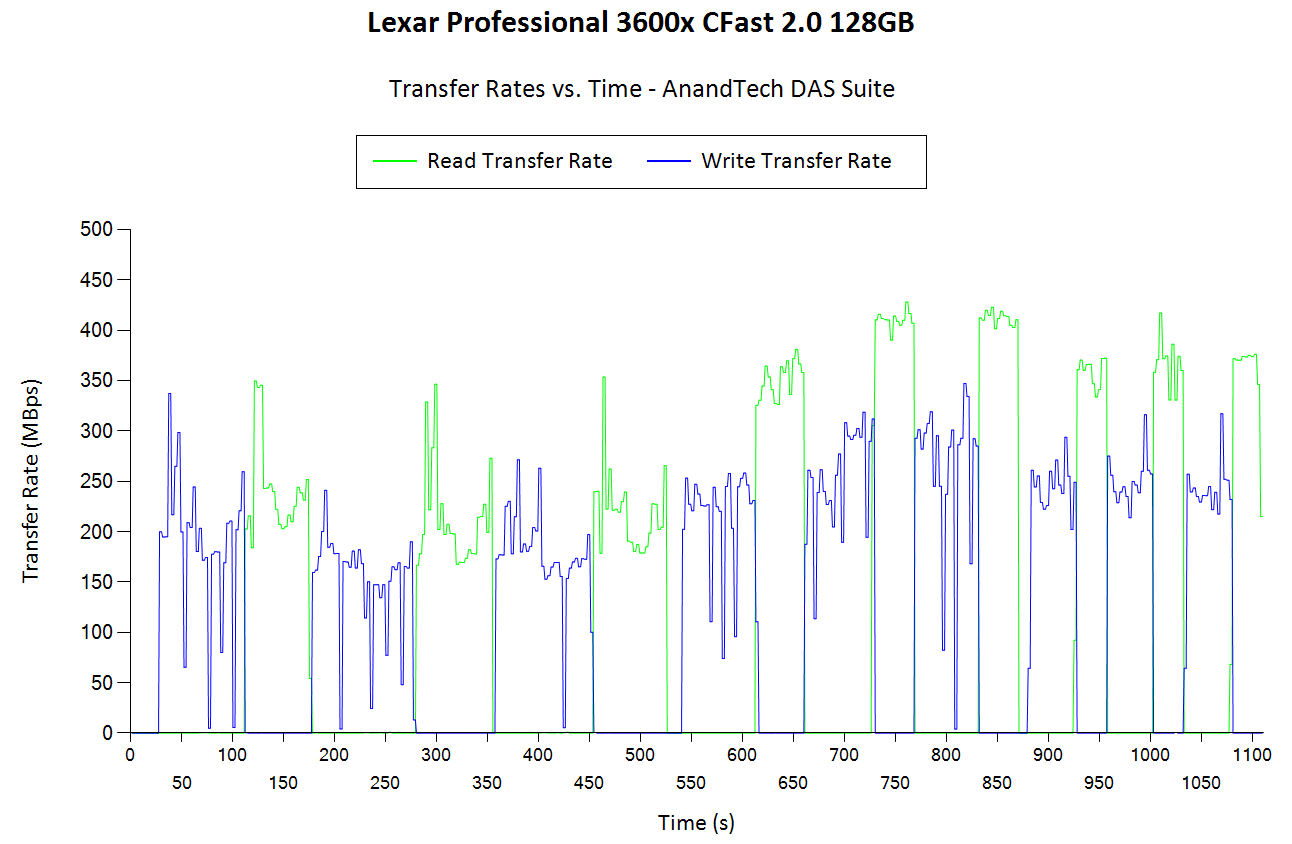 In this particular test, carried out in a relatively fresh state, consistency is seen when files of similar size are written to the card at different points in time.

The average transfer rates for each workload from the previous section is graphed below. Readers can get a quantitative number to compare the Lexar 3600x 128GB CFast card against the ones that we have evaluated before.

The traditional memory card use-case is to delete the files on it after the import process is completed. Some prefer to format the card either using the PC, or, through the options available in the camera menu. The first option is not a great one, given that flash-based storage devices run into bandwidth issues if garbage collection (processes such as TRIM) is not run regularly. Different memory cards have different ways to bring them to a fresh state.Based on our experience, CFast cards have to be formatted using the CFast Sanitize Tool from the card vendor.

The performance loss in the used state is not readily evident in the CrystalDiskMask tests due to the relatively small data set size. However, we did see issues in the sustained sequential write test earlier. Running the santitize tool actually brought down the performance numbers a bit. In any case, we ran our sequential FIO workload again on the sanitized card and saw that the performance was restored.

In addition to raw performance and consistency, pricing is also an important aspect. This is particularly important in the casual user and semi-professional markets, where the value for money metric often trumps benchmark numbers. The table below presents the relevant data for the Lexar 3600x 128GB CFast card.