With the vPro variants of Kaby Lake, Intel is announcing the launch of Intel Authenticate. This is a hardware driven protection system designed to offer more security for user authentication, such as hardware based biosensors (iris, fingerprint) or location based (Bluetooth) security. Similar to how other hardware authentication based systems work, the vPro CPUs will have Intel’s Security and Software Guard Extensions (SGX) enabled to be able to isolate various instruction workflows and also detect when potential intrusion occurs. Intel did not go into any significant detail here, probably based on the initial audience for the Kaby Lake launch being more consumer oriented, but we were told that Intel is working with popular password managers to offer a more secure environment. 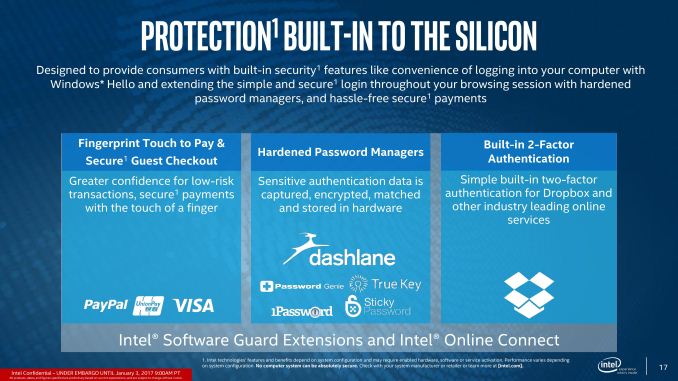 For anyone following our NUC testing, you may remember that during testing of a Skylake-Y NUC, we found that the PCIe 3.0 x4 slot for M.2 drives was actually limited to PCIe 2.0 x4, effectively reducing the peak bandwidth. At the time we probed Intel and our data sheets to find out that it was actually a limitation imposed by Intel on the CPU which wasn’t obvious from the original launch materials. The interconnect between the CPU cores/system agent and the integrated chipset, what we normally call DMI on a desktop platform but is called OPI on an SoC, was fixed at PCIe 2.0 speeds.

We asked about why this was the case, and we were told that the system actually can support PCIe 3.0 x4 speeds, and the system even tests this on startup, but for stability PCIe 2.0 is chosen. This made the marketing of the NUC a little confusing, especially as PCIe 3.0 x4 for storage was listed as a feature. Working with Intel, they pushed through a new BIOS for the NUC that kept the OPI at PCIe 3.0 x4 speeds, and we were able to get peak bandwidth from our storage devices. However, that BIOS update was limited to one mini-PC from one vendor, leaving all the other vendors to do their own thing.

This time around, Intel is doing the change by default (on every KBL processor, except the Core i3-7100U). The interconnect to the chipset now runs at PCIe 3.0 x4 speeds, allowing the integrated chipset to offer full PCIe 3.0 lanes for extra controllers, storage and other features. For the Y series, this means 10 PCIe 3.0 lanes and the U series get 12 lanes. We could end up seeing some Core i5/i7 devices offer dual M.2 PCIe 3.0 x4 RAID as a result, depending on compatibility. Intel also lists NVMe support for the five processors on OPI 3.0.