In this review we have put together a dozen stock coolers from AMD and Intel, going back through several years, and compared them against a popular off-the-shelf aftermarket cooler. Both AMD and Intel supply stock coolers with most of their processors as a form of 'guaranteed' to work with the processor, but not all solutions are equal, and do not take into account absolute performance or noise. Because AMD has recently launched their high-end Wraith and near-silent stock coolers with their performance processors, we actively went to source a number of these as well as the Cooler Master EVO 212 for an overall comparison.

Intel’s line of stock CPU coolers seem to have been designed to have characteristics agnostic to the requirements of the specific socket it was bundled with. The main difference between the coolers ends up being the noise that the cooler generates. For example, both of the 1155 coolers had similar absolute thermal resistance, but the copper core E97378 is significantly quieter. As one might expect, the only cooler that was an exception to that rule was the one bundled with a $1000 CPU (E31964-001). However, that does not mean that the coolers of cheaper CPUs will perform worse or necessarily be louder overall.

Cheap low power CPUs also have lower thermal losses than the high end models based on similar technology, meaning that an 'inferior' heatsink will also likely have a lower thermal load to deal with. The main difference will be discernable only when the cooler is idling, as the copper core coolers can lower the speed of their fans to nearly inaudible levels. This is arguably the best takeaway message for stock coolers: copper cores help with noise rather than absolute thermal resistance. 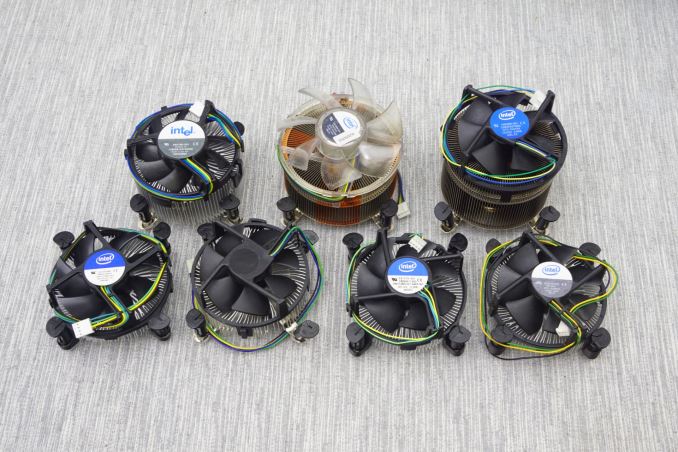 For AMD's coolers, there is a clear dichotomy in their cooling range. The high-end parts, particularly those at 95W and above (and the A10-7860K), get the newest and best coolers. 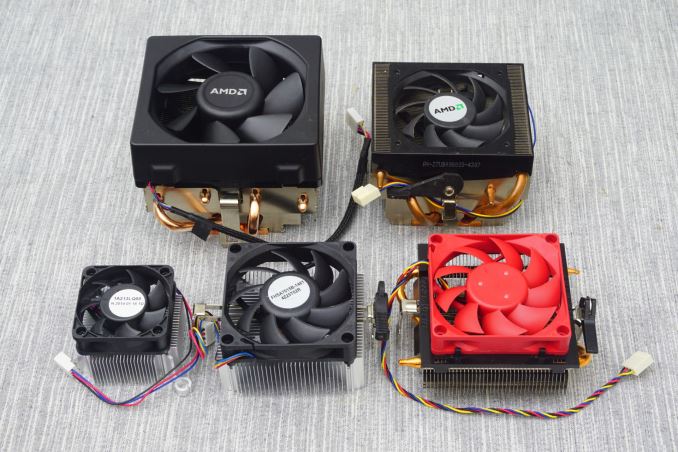 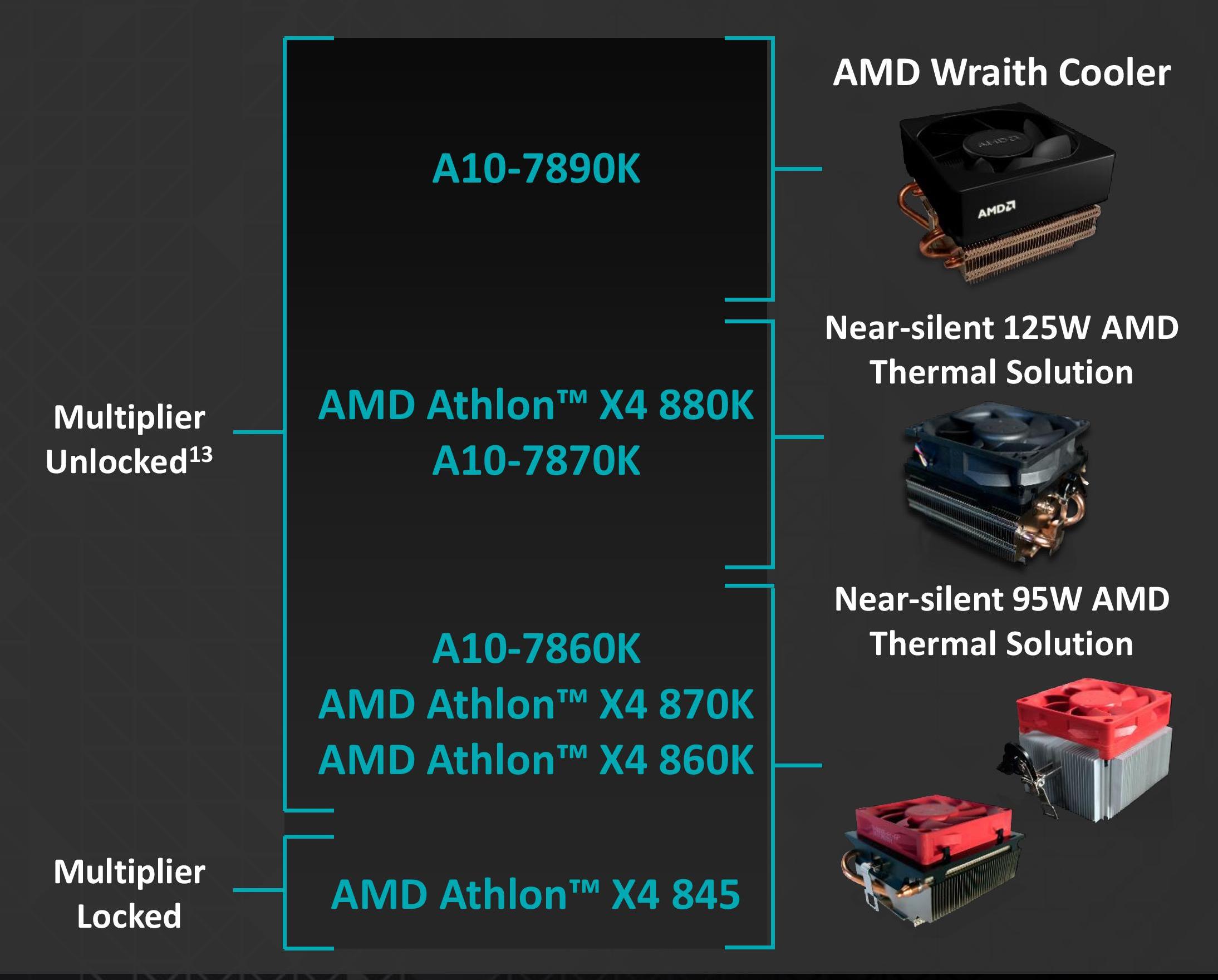 Most of their other CPUs come with the FHSA7015B, a cooler with mediocre overall performance that just gets the job done. Certain top tier models, such as the Godavari core FM2+ CPUs, come with advanced models that do offer higher overall performance and lower noise levels. The performance of these coolers may not be on par with mainstream tower coolers comparable to the Cooler Master EVO 212, but it is an upgrade comparable to buying an entry-level $15-20 tower aftermarket cooler and meeting the EVO half-way, in a sense. Only the latest 125W Wraith cooler is an exception, greatly outpacing even the Cooler Master HK8-00005 and AMD AV-Z7UB408003, coolers that were or are being supplied with other top tier CPUs.

It's clear from the market that AMD is taking a broader interest in coolers recently, whereas Intel has taken a different direction with the new Skylake-K CPUs being sold without stock coolers. It creates an interesting platform where a good cooler might add to the cost of a processor, whereas the high performing CPUs remove their stock coolers to become more price competitive (even if you have to spend another $30 to get a cooler anyway).

But naturally, our conclusion is going to be dominated by the top performers of this roundup - the Intel BXTS15A, the AMD Wraith and the Cooler Master EVO 212. 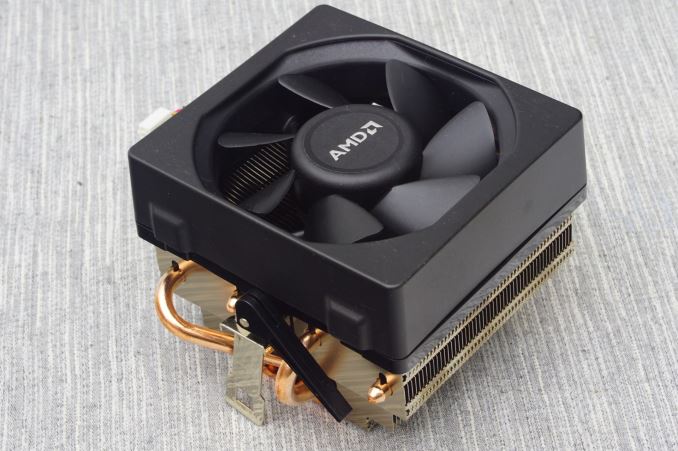 AMD is supplying the Wraith for free alongside their top tier CPUs and it proved itself capable of performance comparable to that of a reputable mainstream cooler such as the Cooler Master EVO 212. The Wraith’s high thermal performance can be attributed to the strong 90 mm fan and heatpiped design. This saves the average user from spending a significant monetary sum for a good, silent cooler, as the Wraith is more than enough for everyday use and even for reasonable overclocking. For those that are interested, the AMD side lights up when powered as well. 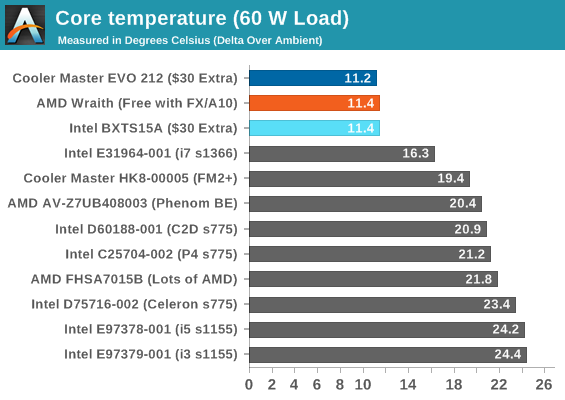 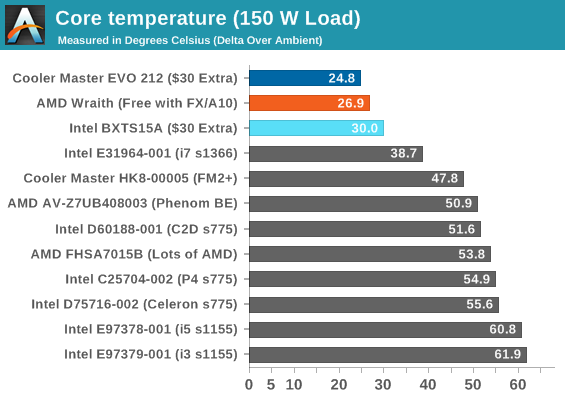 Intel supplies the BXTS15A as an aftermarket cooler, an upgrade over the stock coolers supplied alongside their CPUs. However, it hardly makes sense as an upgrade. There are several better aftermarket CPU coolers better than the BXTS15A with the same price tag, including the Cooler Master EVO 212 that was showcased in this review.

Most of Intel's CPU coolers are rated as 'good enough' for the platforms they target. However, there is no guarantee of long-term stability (note, dust) and we can see that audible performance when pushing a CPU can be excessive. If the BXTS15A was being supplied alongside a CPU then it could prevent some users from upgrading to better coolers, or it could be a viable option if it was selling for less than $20, but has little to no market value as a standalone product at such a retail price. If there are no space constraints or other mechanical issues (mounting security/strength, portability, etc.), then the recommendation is that a user bypasses the BXTS15A and moves straight on to something like the Cooler Master EVO 212 or other comparable aftermarket cooler.

A side note about noise:

It is rather ironic that both AMD and Intel are marketing their best coolers as “quiet” models, as they were among the loudest that we have tested here today when their fans were forced to operate at absolute maximum speed. AMD has stated that the Wraith 'shroud' over the top of the cooler is a few db louder (due to vibrations) than the near-silent variant, but affords additional lighting to show off the system. The catch with both the AMD and Intel solutions is that both of these coolers will actually be quiet when they replace the louder stock coolers that CPUs usually ship with, especially the smaller heatsinks of the cheaper models, although the Intel variant is an extra outlay. If the Wraith or the BXTS15A are installed on a stock CPU, their mass is enough to keep the CPU cool without relying much on airflow, allowing the thermal control of the motherboard to keep the fan’s speed (and noise) very low. It comes down to the cost of such a difference.

Cooling performance can change quickly if the CPU is constantly under heavy stress and/or overclocked, as the thermal losses of the CPU multiply under such conditions. Both companies obviously wanted to ensure that their top end coolers can hold the processors cool enough even under such conditions and thus they are using very strong fans that can provide high levels of airflow if needed. Ultimately the best way to increase airflow in these situations is with larger fans that run slower (such as the EVO), but this can be difficult when staying within specifications or having to design basic coolers to a price point without taking a loss.