Intel’s E97379-001 and AMD’s AV-Z7UB408003 coolers are equipped with automatic speed correction circuitry and adjust their speed to the maximum regardless of the input voltage. This renders the majority of basic fan controllers, rheostats and simple fan speed reduction resistors useless. Their speed can only be controlled via a PWM signal from a motherboard. The E97379-001 did have a small speed drop with an input of 6.5V and we included those results, but the AV-Z7UB408003 was rather adamant and devoid of a PWM signal would always automatically correct its speed to 3000 RPM, giving us the exact same performance results as before. 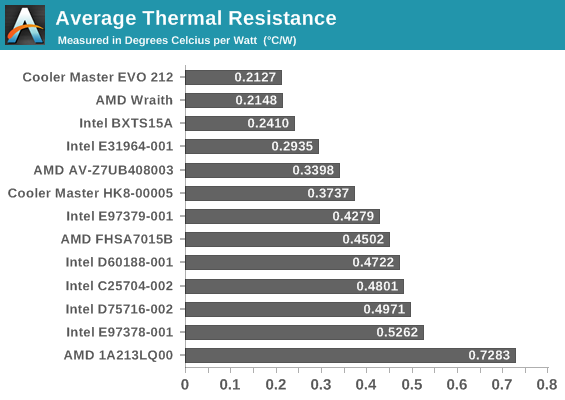 Again, the three most powerful coolers take the top spots at reduced power. 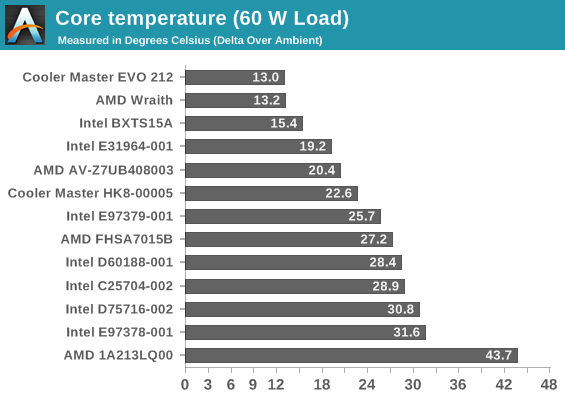 Similarly to the 12V results, the EVO, Wraith and BXTS15A are taking the top spots. It's useful to note that EVO 212 and the Wraith are essentially equal as the power increases, with the Wraith being marginally ahead at very high thermal loads. 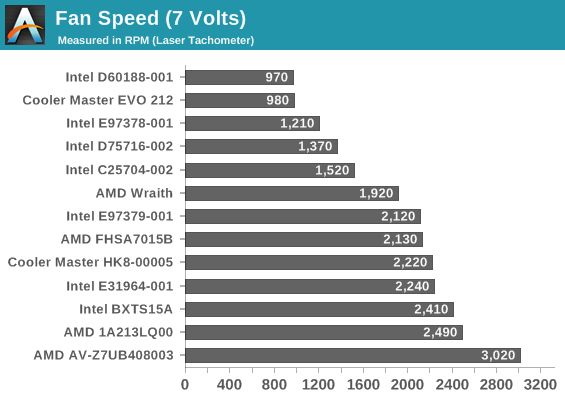 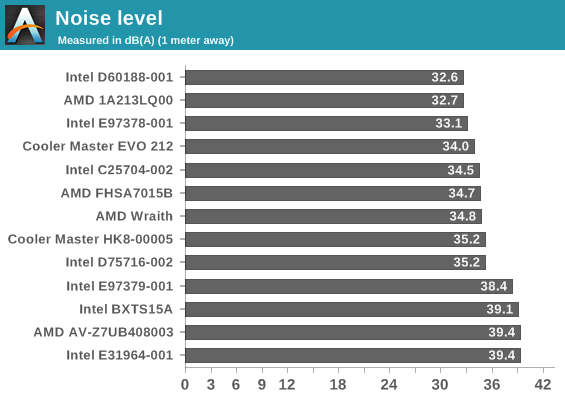 Putting the two "abnormal" coolers with non-adjustable fan settings aside, the thermal performance of the other coolers decreased almost equally, leaving their standings untouched. The D75716-002 still performs similarly to the C25704-002 and the D60188-001, but the former still is the loudest and the latter still is the quietest of the three. As a matter of fact, the D75716-002 is louder than the C25704-002, even though the fan is slower, hinting that either the fan has a worse engine or the denser fins significantly increased the airflow resistance of the cooler.

We cannot compare the AV-Z7UB408003 cooler to the rest of AMD’s coolers due to the autocorrecting fan. Nevertheless, we can make a useful observation looking at the Cooler Master’s HK8-00005 performance. Despite it has a slightly lower mass compared to that of the FHSA7015B and virtually the same fan, its thermal performance is much better, showcasing how two simple heatpipes can significantly increase the efficiency of a cooler.

Once again, AMD’s Wraith goes directly head to head with Cooler Master’s EVO 212, only this time the Wraith also compares in terms of acoustic comfort. There is virtually no difference between the two coolers in terms of thermal performance and both are equally silent with their fan input voltage reduced down to 7 Volts. The Intel BXTS15A does compare in terms of thermal performance but falls significantly behind when it comes to acoustics, as the cooler remains clearly audible even with its fan’s speed reduced by nearly 40%.