Going through the benchmark data for our Carrizo part compared to Kaveri, Richland and Trinity gives two very different sides of the same story. Simply put, it would come across that Carrizo is overall better at CPU tasks when you compare clock for clock, but performs worse when a discrete graphics card is in play for gaming. There are some slight exceptions for both sides of this story, especially when larger memory accesses comes in, but this comes down to the design choices when Carrizo for desktop was made. The fact that we have a laptop CPU in desktop clothing is going to be a main detractor when it comes to gaming, but the CPU compute side of the equation is very promising indeed.

In our generational testing, we compared the following four processors at 3 GHz and running the highest supported JEDEC memory speeds for each:

It is worth noting that for the most part the X4 750K and X4 760K are essentially equal, using a slightly modified Piledriver v2 microarchitecture for the X4 760K that in most cases performs similarly to the other processor at the same frequency. This will come through in almost all of our benchmark comparisons. However, the main battle will be between the top two.

Our results are going to be compared in two different ways. Firstly, we are going to look at the absolute improvement of each processor compared to the lowest one in the test: Trinity. This gives a direct analysis of the performance increase per clock total increase for every generation from 2012 to 2016. What follows is a series of graphs for each of our benchmark sections showing the results of each benchmark as a percentage improvement over Trinity. We'll analyze each one in turn. 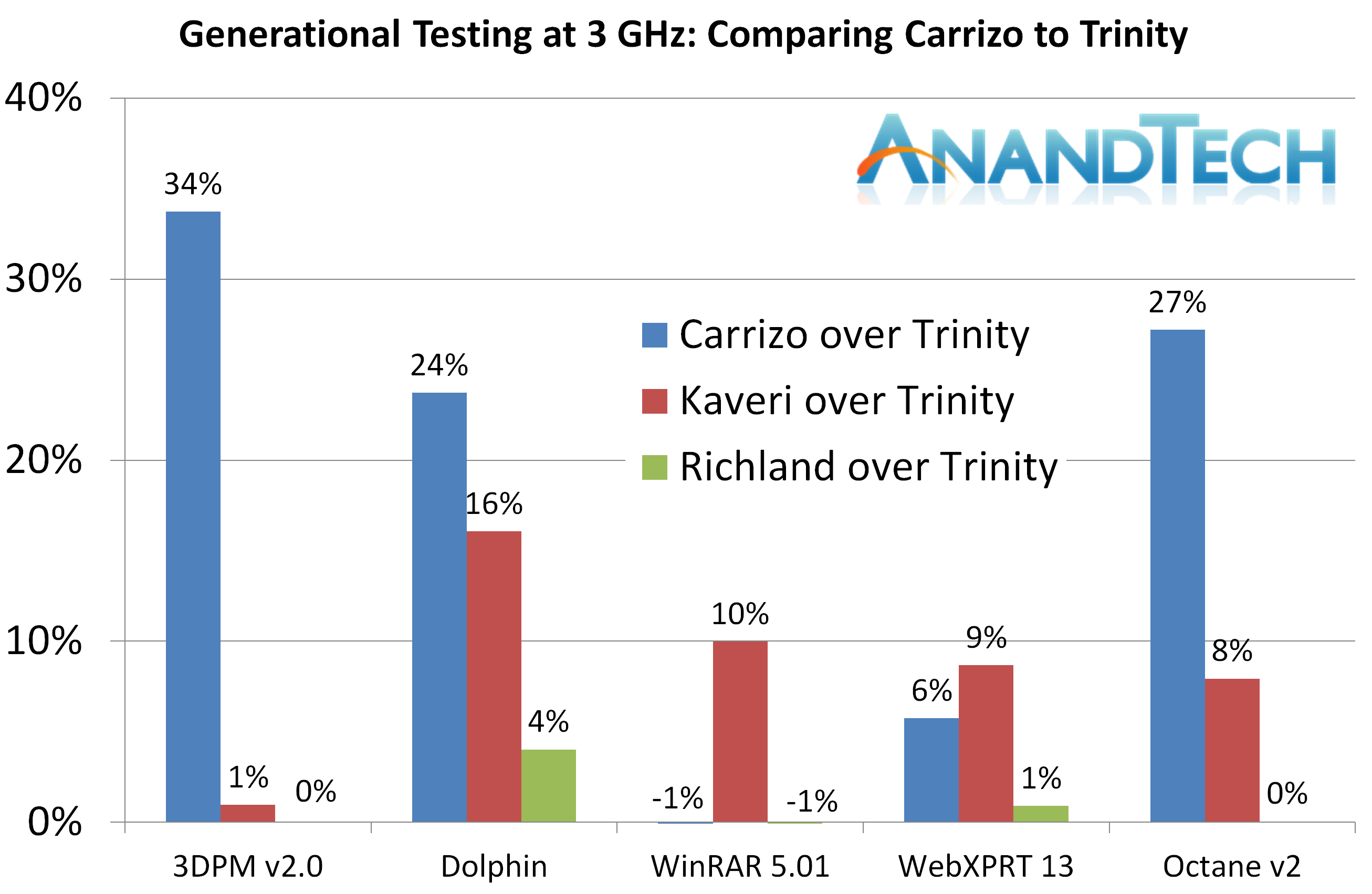 From our Real World benchmarks, Carrizo gets a good showing in three of the benchmarks, showing a sizeable jump over Kaveri, however WinRAR and WebXPRT are a little lower. 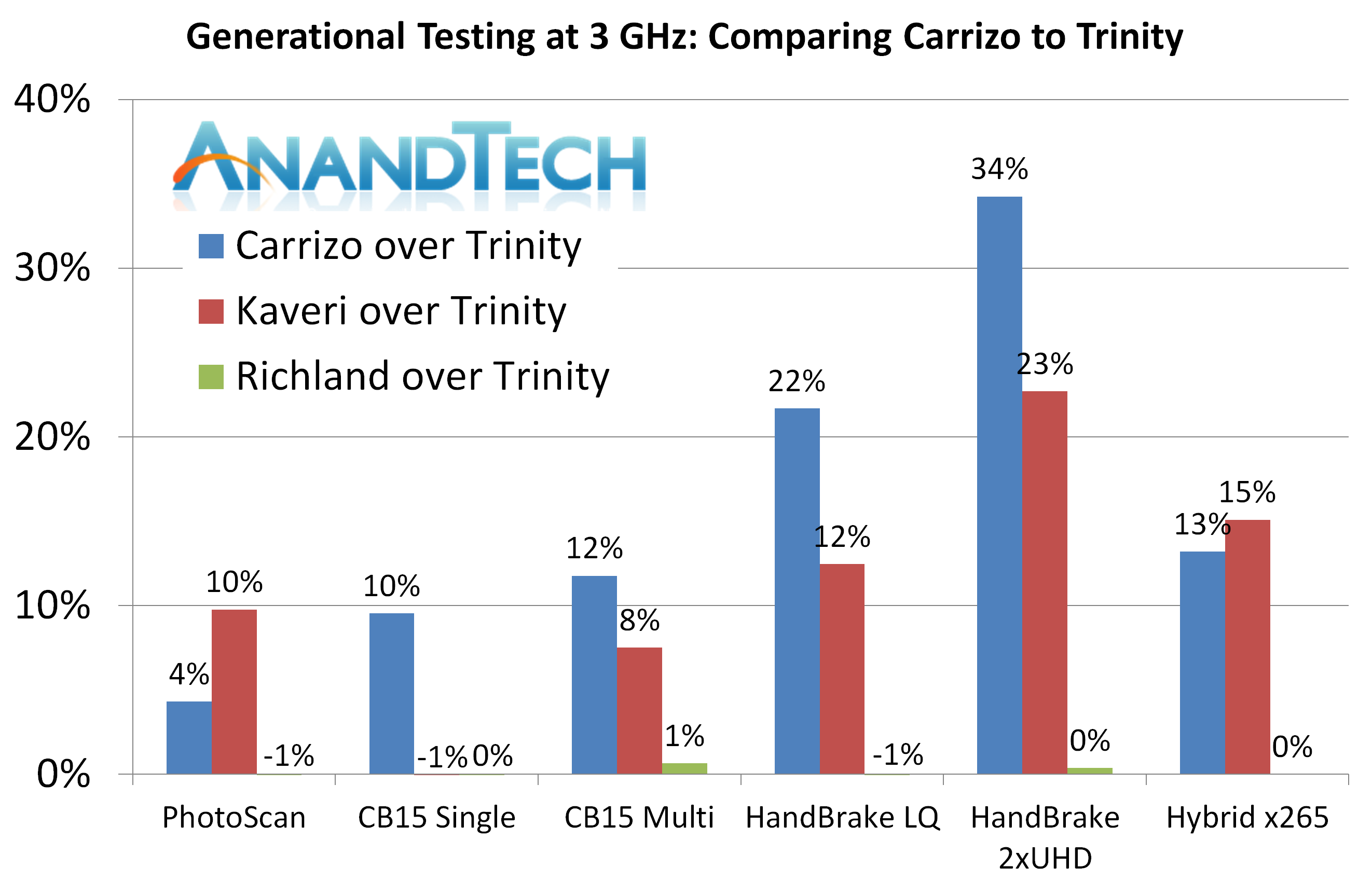 For the office tests, Carrizo takes the biggest gain for CineBench and Handbrake, but sits behind in Photoscan and Hybrid. HandBrake shows a sizable gain in both tests compared to Trinity. 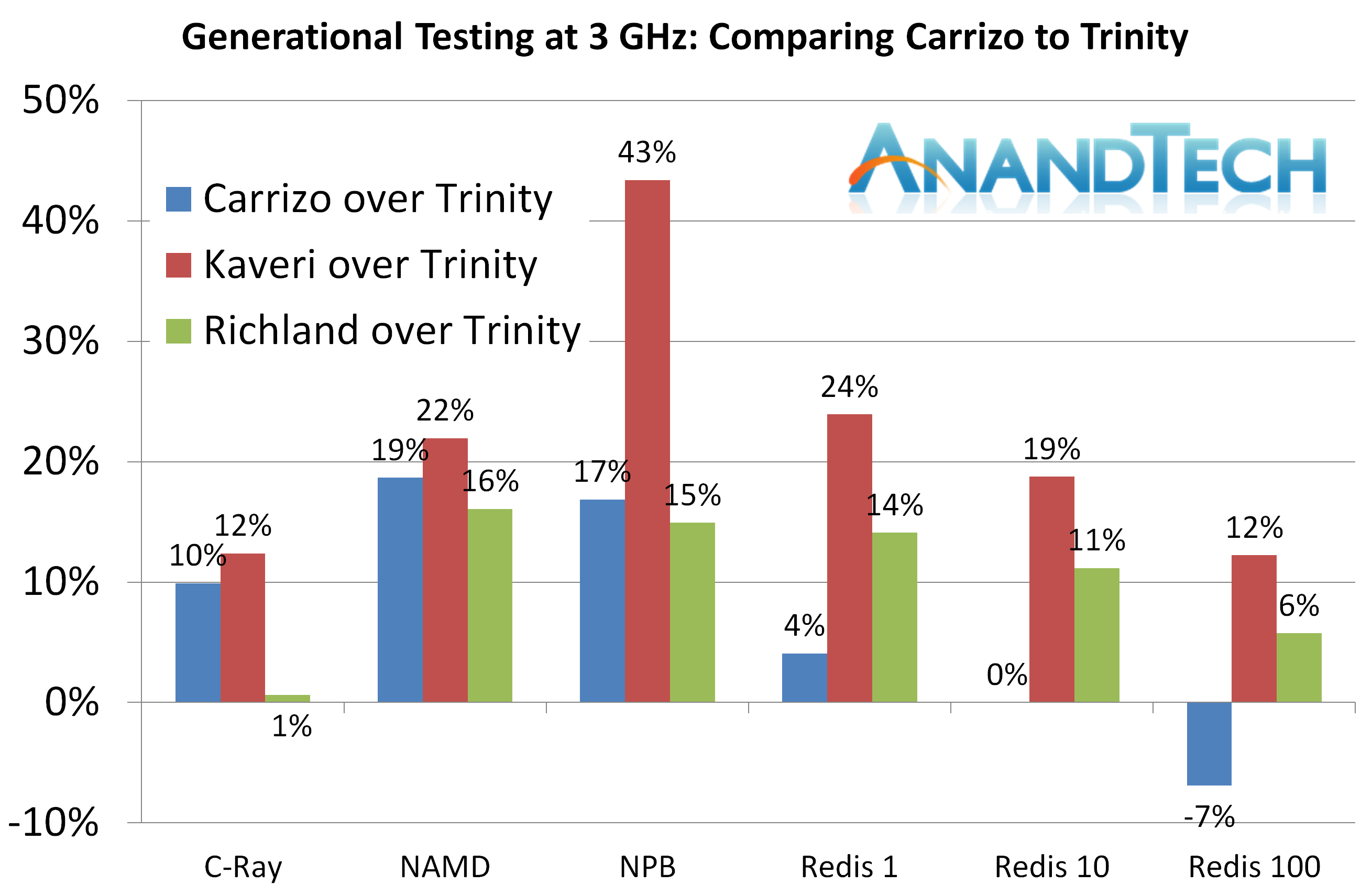 The Linux-Bench tests shows Carrizo behind Kaveri in each instance, and behind Richland for all three Redis tests. As we explained in that section, Redis is very memory dependent and as a result, despite having the larger L1 cache, only having 2 MB of L2 cache is a blow to the Carrizo part. 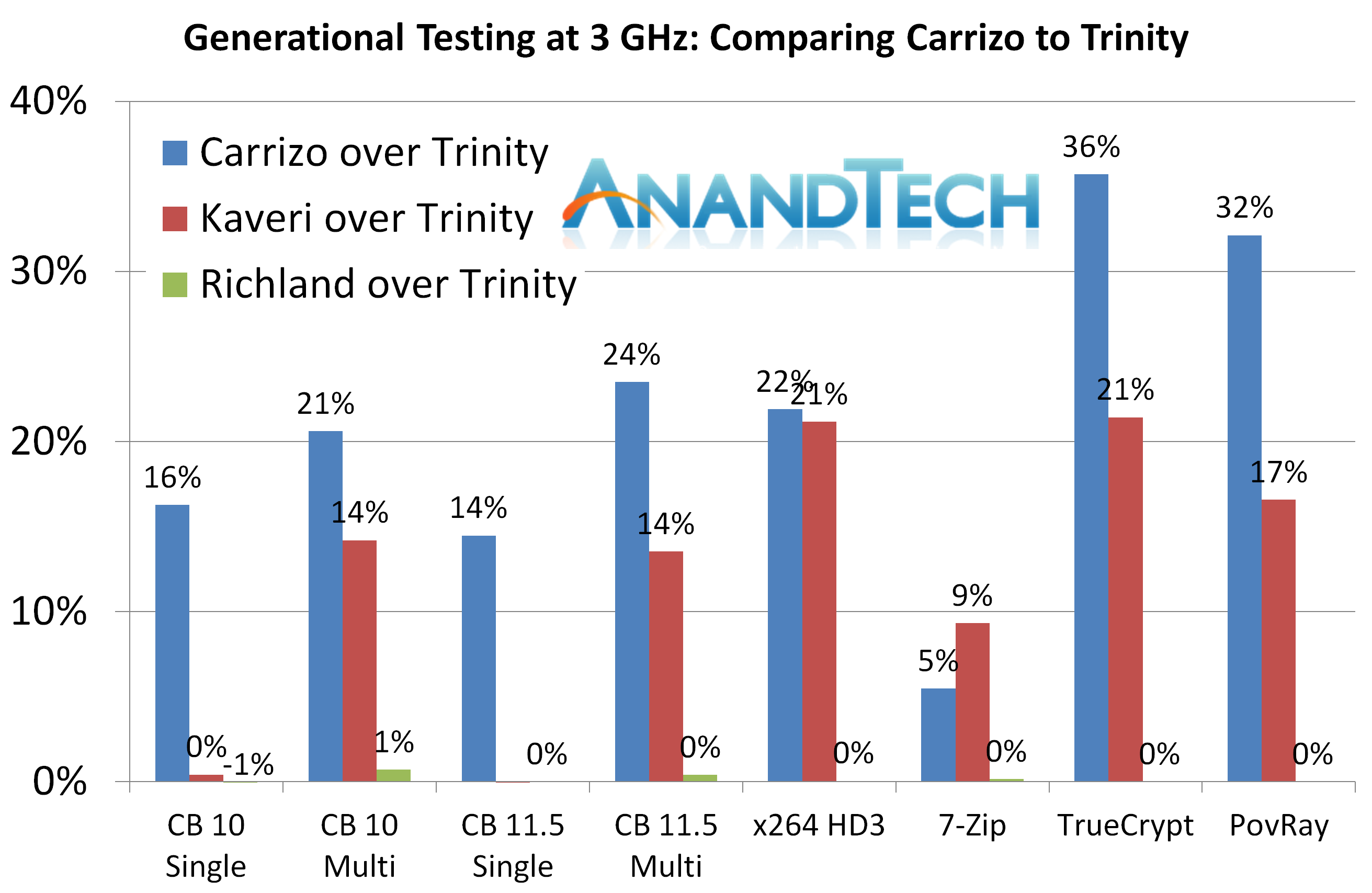 So here is where it is interesting. If you were only looking at synthetic and legacy tests in isolation, like many other review websites do, then you could be forgiven that it shows Carrizo taking a distinct lead in every benchmark (except 7-zip). In many cases there is a 10-20% gain over Kaveri. 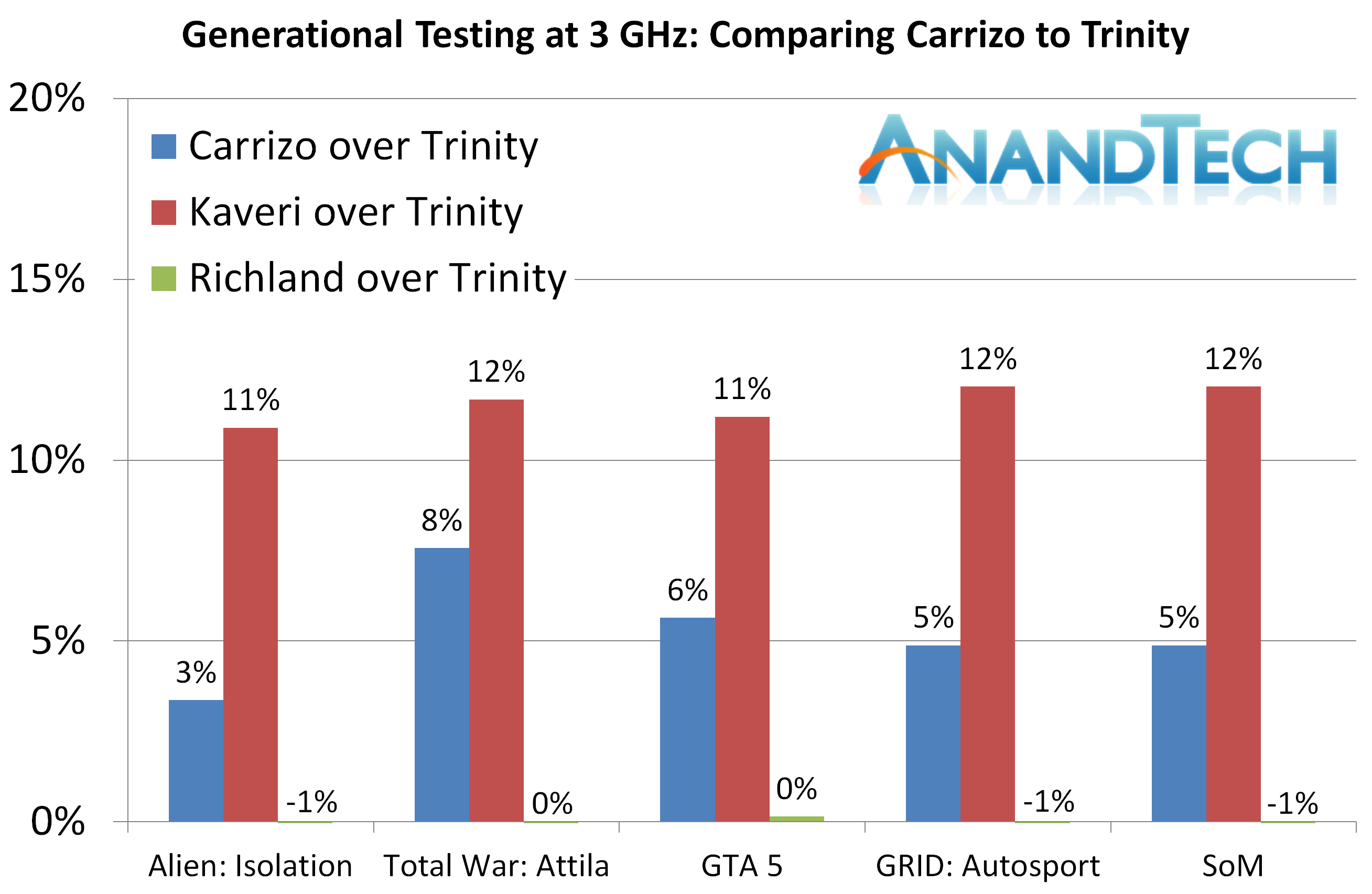 For gaming, as explained in the testing, despite the improvement over Trinity that Carrizo offers, the deficit to Kaveri is consistent across the board.

Next, we have the generational updates moving from Trinity to Richland to Kaveri to Carrizo. This is where we typically expect to see single-digit percentage increases moving through the generations, with double digits for large gains or introduction of new IP blocks into the silicon (e.g. encryption or video conversion). Again, we go through each of our five benchmark sections for this. 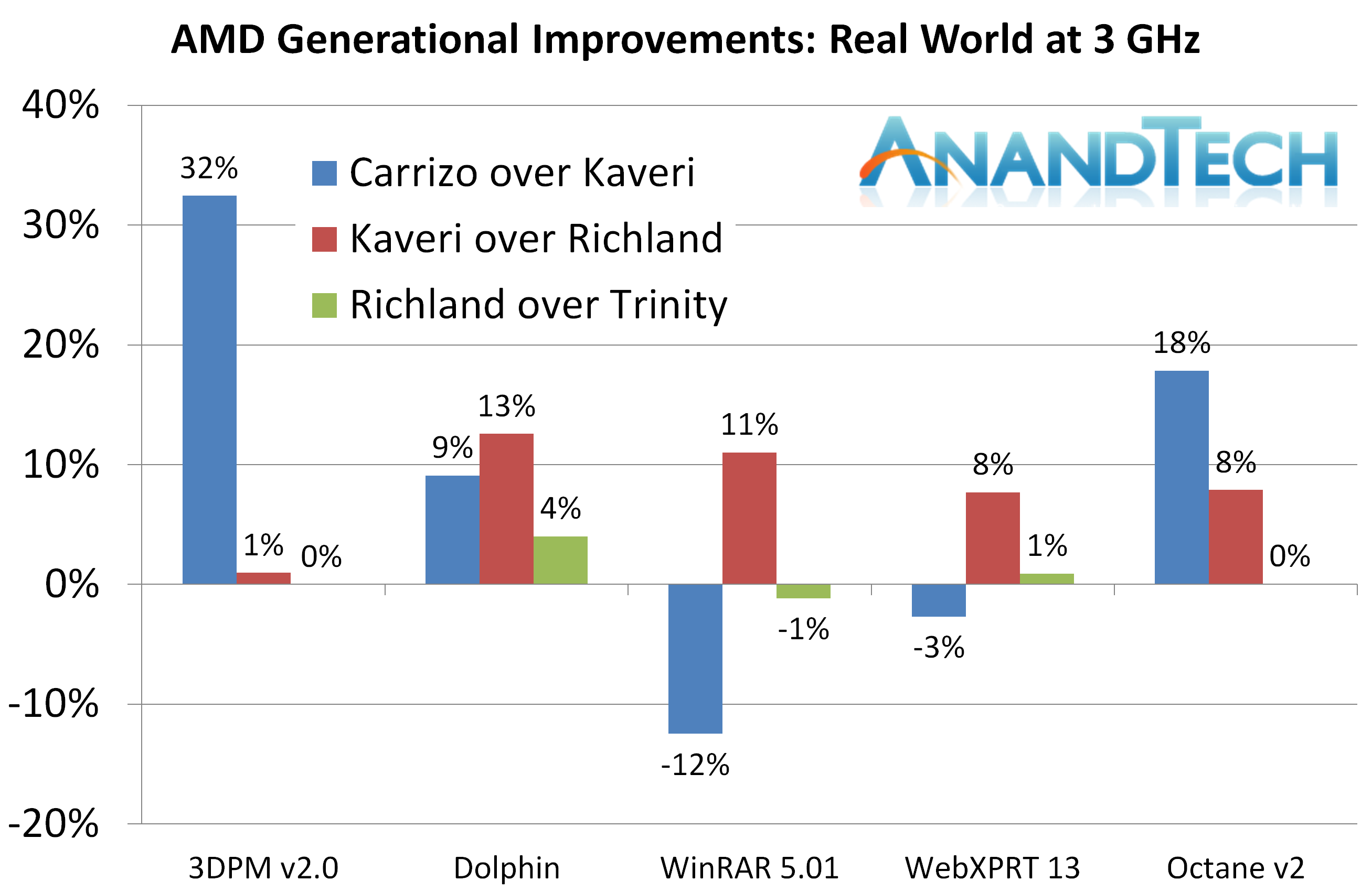 3DPM v2 takes the biggest gain, a massive 32% over Kaveri, due to better memory management and a larger L1 cache. WinRAR, being memory dependent, loses due to the smaller L2. 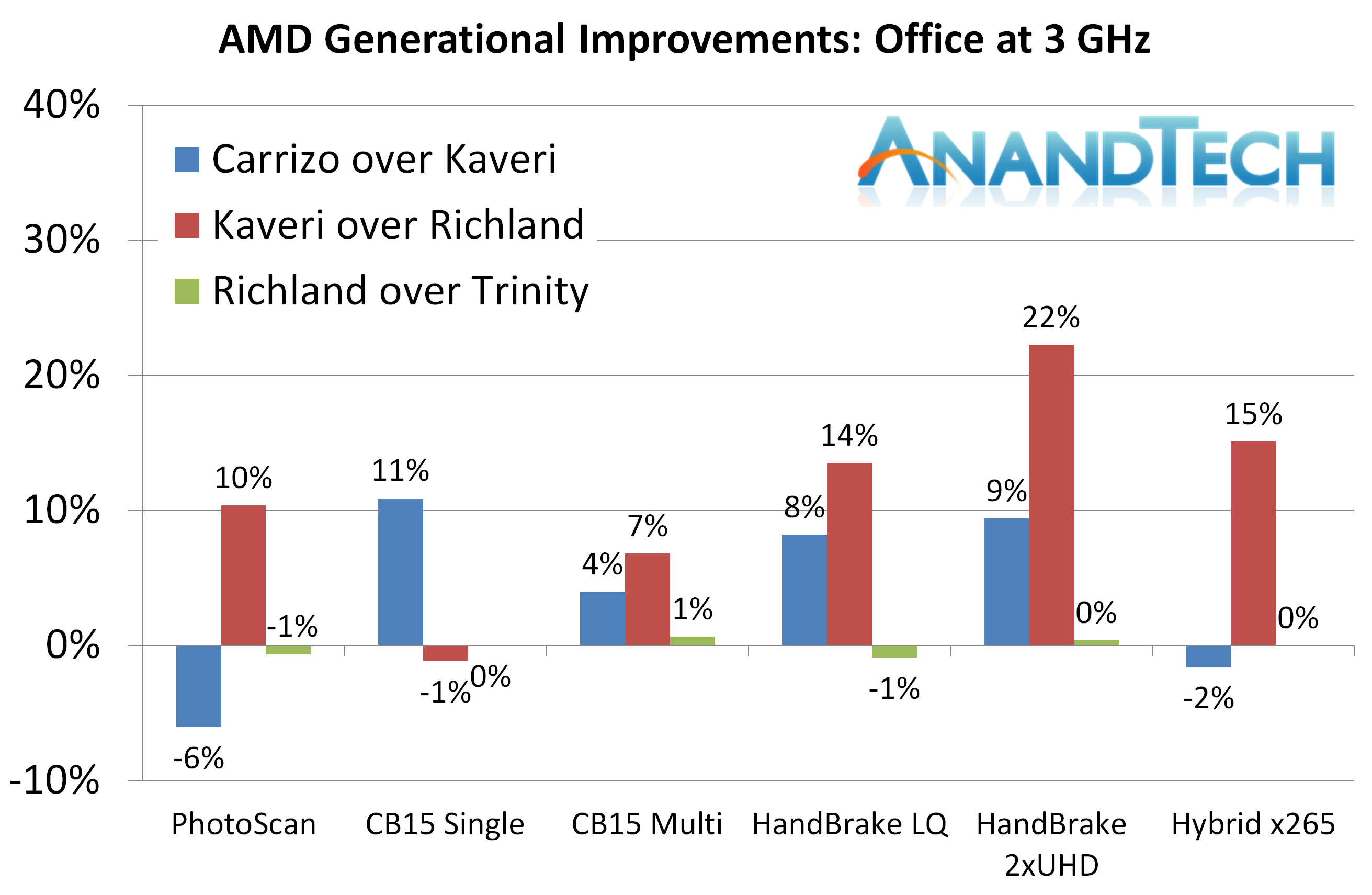 The office tests are a mixed bag - we see a regression in Photoscan due to large memory accesses, but it is clear that Kaveri was a bigger jump for a number of things than Carrizo. 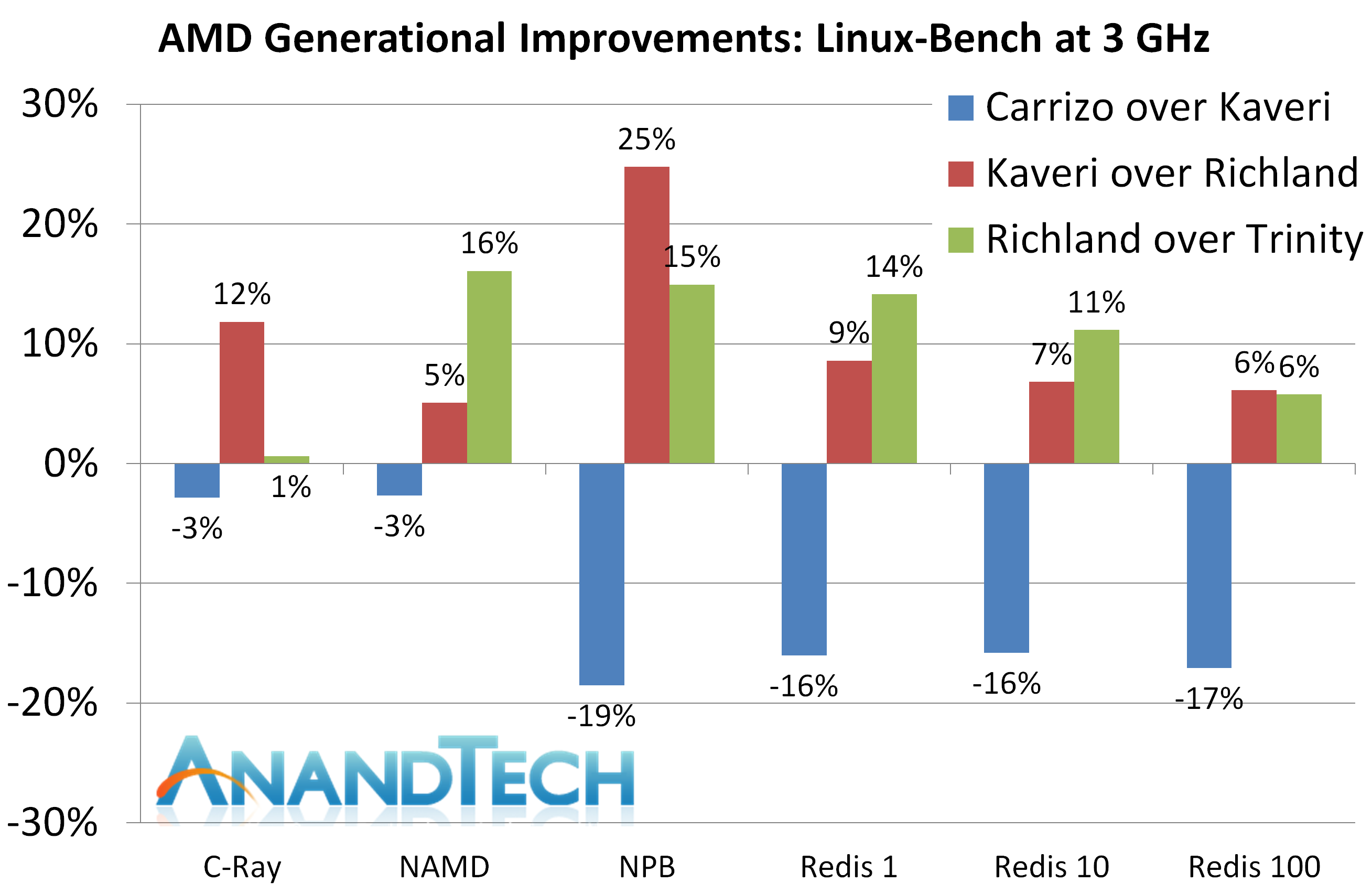 Our Linux tests get a poor showing across the board from Carrizo, which we saw in the results. In each case, the IPC for Carrizo is lower than that of Kaveri. 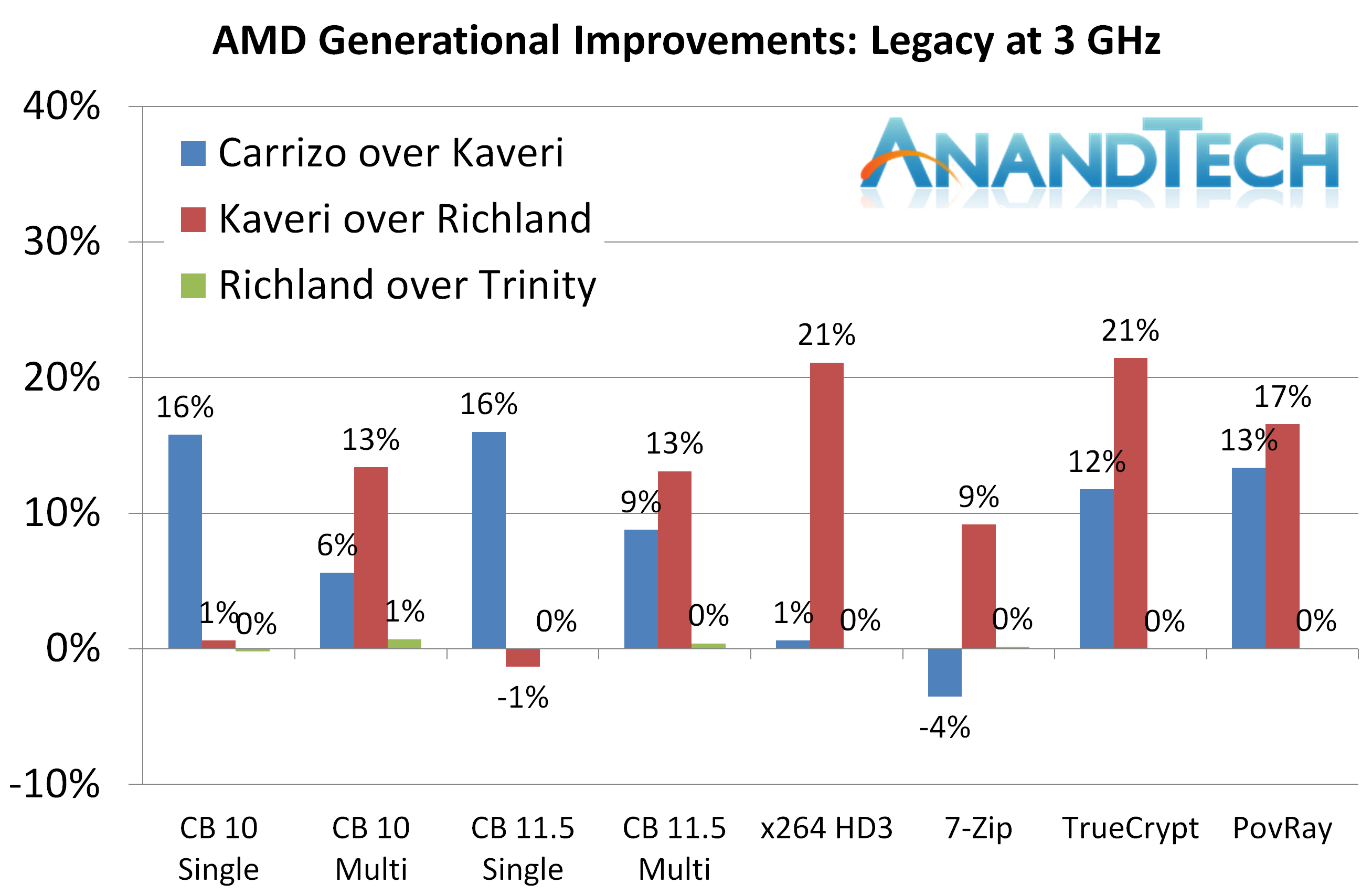 Back with the previous legacy results graph, we saw that Carrizo had a better performance than Kaveri across the board, except 7-zip. Translating this to IPC improvements and we see that in half the cases, moving to Kaveri was better than moving to Carrizo, with CineBench single threaded tests being the exception showing the capability of the core logic in Carrizo. 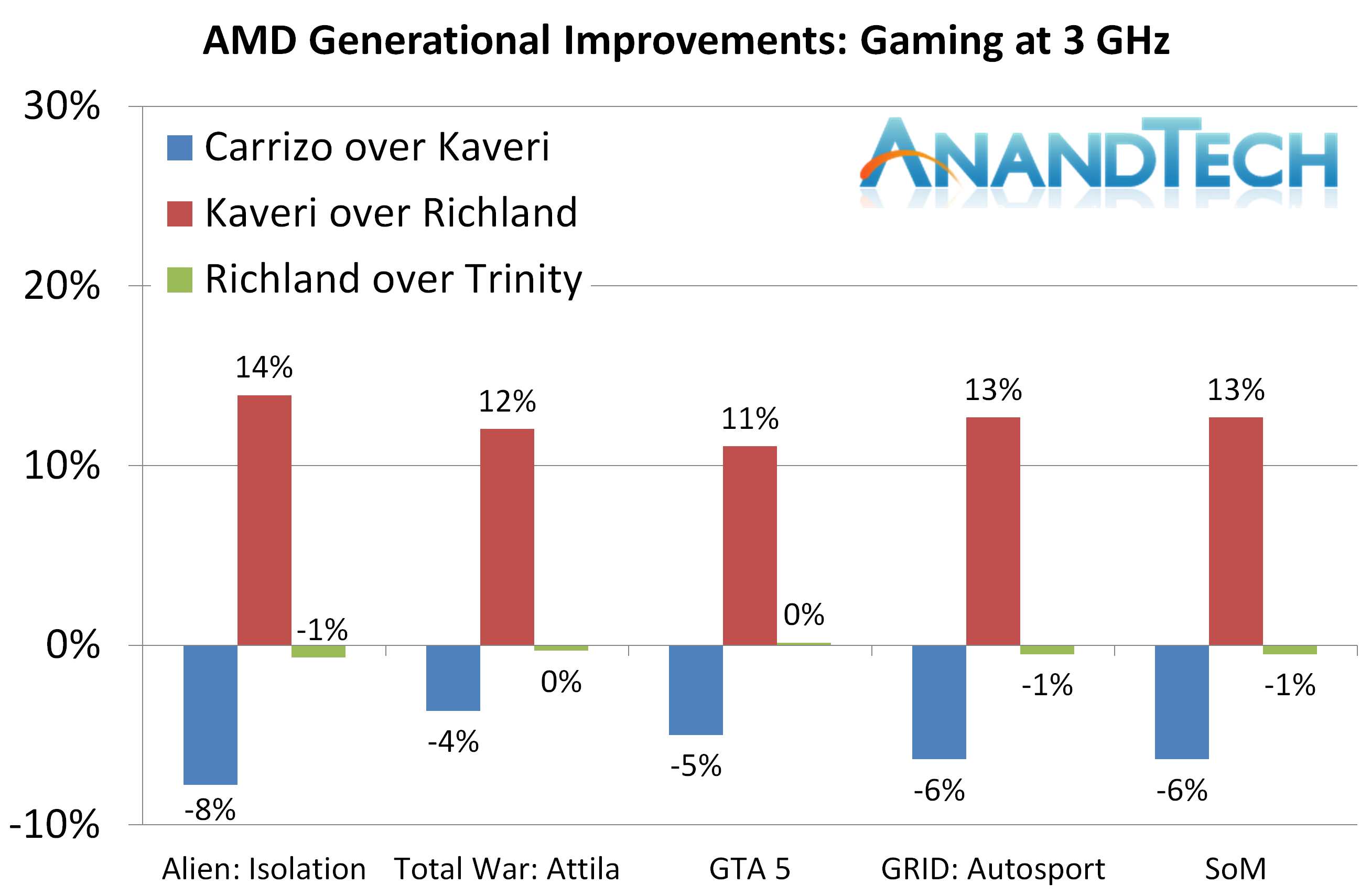 However, the big result will be for gaming. Clock for Clock, Carrizo gives an average 5.8% decrease in performance to Kaveri.

Wrapping all the numbers together, we get the following average IPC improvements for a Carrizo with 2MB of L2 cache over Kaveri with 4MB of L2 cache for each section:

The headline figure, for CPU compute benchmarks (real world, office and legacy), is that Carrizo offers a +7.3% improvement over AMD's previous microarchitecture, Kaveri. It comes with the caveat that Linux and Gaming performance, which in our tests tend to rely more on memory accesses, perform 6-12% worse.