For our stock performance comparison, we take our four CPUs at their off-the-shelf frequency and also add in benchmark results from previous reviews for processors that are at a similar price. In the case of the Carrizo core based Athlon X4 845, which had an original MSRP of $70, this means that Intel’s dual core Pentium G3258 at $72 is the main competition. The Pentium comes with integrated graphics and a higher per-clock performance, however the Athlon has four threads to play with, which is two more than the Pentium, meaning the initial examination is a back and forth between the two. 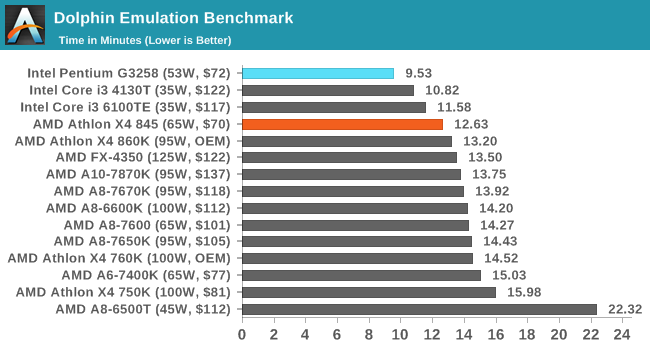 Dolphin historically favors Intel, and all three of our comparison points beat all the AMD processors here. The Athlon X4 845 holds the top spot for the AMD parts however. 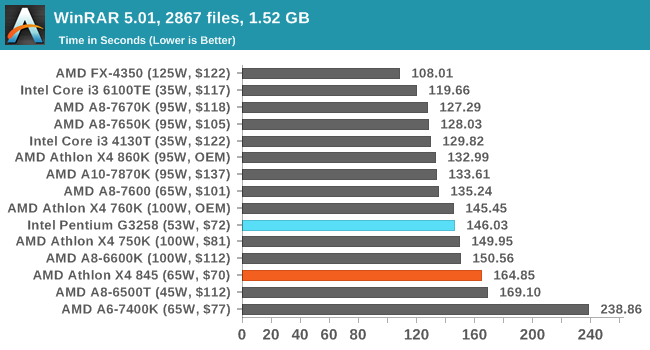 As stated earlier in the review, the X4 845's performance is below that of the other Athlon parts due to the 2MB of L2 cache. It still stays within reasonable striking distance of the Pentium here though.

The second version of this benchmark is similar to the first, however it has been re-written in VS2012 with one major difference: the code has been written to address the issue of false sharing. If data required by multiple threads, say four, is in the same cache line, the software cannot read the cache line once and split the data to each thread - instead it will read four times in a serial fashion. The new software splits the data to new cache lines so reads can be parallelized and stalls minimized. As v2 is fairly new, we are still gathering data and results are currently limited. 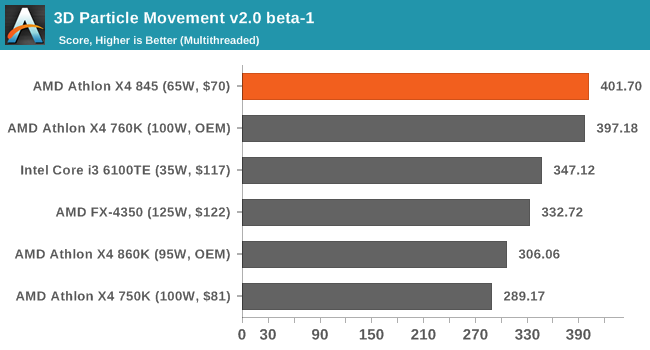 As 3DPMv2 is still new, we don't have G3258 results at this time, but we do have i3-6100TE results. Carrizo has an architectural advantage over other AMD microarchitectures, but the speed of the 760K means that it catches up. Both parts are ahead of the Core i3.

On the lower end processors, general usability is a big factor of experience, especially as we move into the HTML5 era of web browsing. 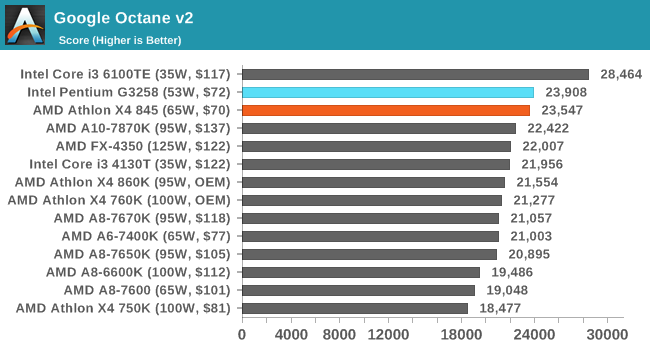 Both AMD and Intel get similar scores in Octane.