The PRO 5 comes with a 5.7-inch FHD (1920x1080) SAMOLED display made by Samsung, which means it uses a diamond PenTile subpixel layout. With a pixel density of just 386ppi, it will be fairly easy to notice the effects of the subpixel array if you look carefully.

We’ll measure the performance of the PRO 5’s display with an X-Rite i1Pro 2 spectrophotometer and an i1Display Pro colorimeter for brightness and contrast measurements, and we’ll use SpectraCal's CalMAN 5 software to manage the data. 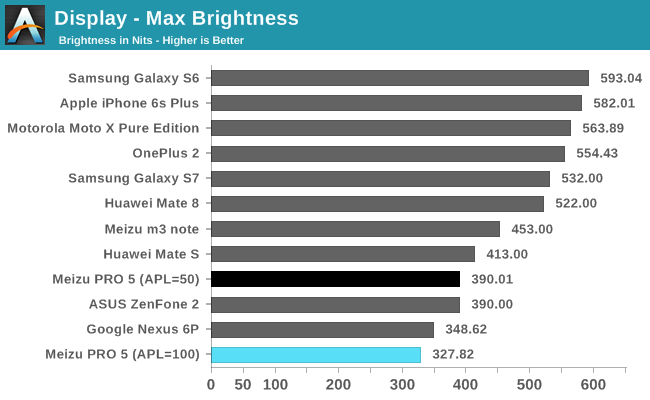 We test a display’s max brightness with a white image at 100% APL, which is more difficult for OLED displays. Except for Samsung’s Galaxy S6 and S7, which have a special overdrive mode that temporarily boosts brightness when auto-brightness is enabled, the other OLED panels in our chart struggle to break 400 nits. The Meizu PRO 5 reaches a prosaic 328 nits, a little less than the Nexus 6P and significantly less than most of the LCD displays in this chart. Reducing APL to 50% allows the PRO 5 to reach 390 nits, which is still below the 400 nit threshold I consider to be acceptable. While the PRO 5 is bright enough for most indoor situations, it becomes difficult to see the screen outdoors or when there’s bright reflections. 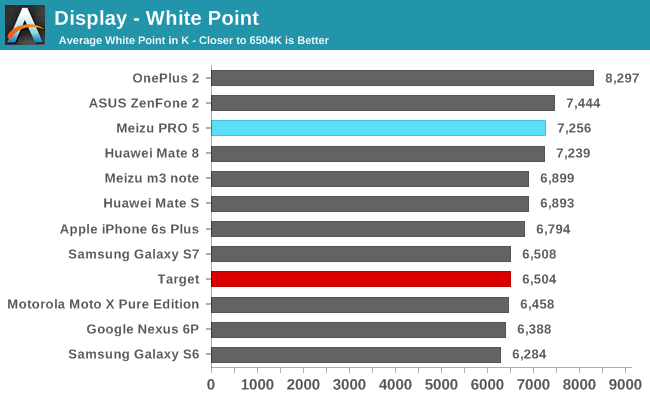 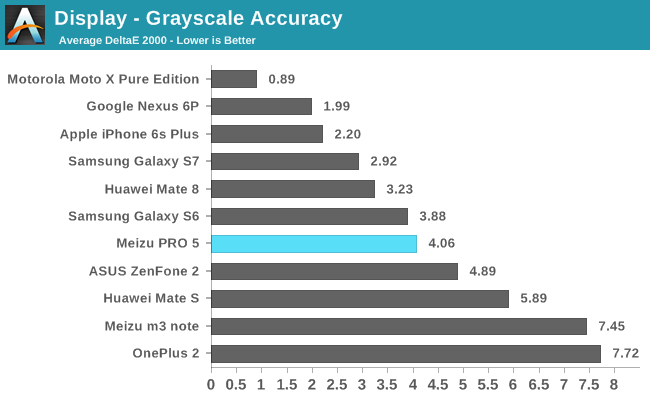 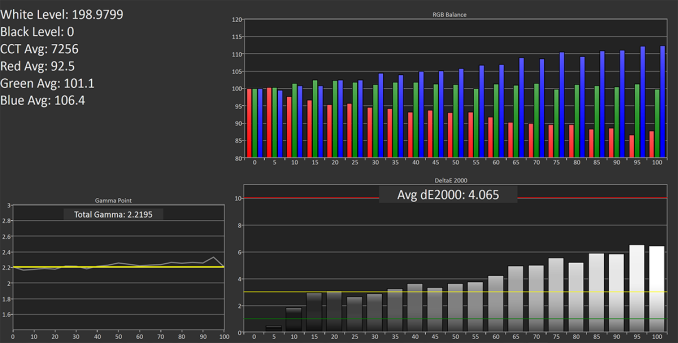 Because the PRO 5 uses an AMOLED display that can completely turn off individual pixels, it delivers a black level equal to zero. Mathematically, this gives it an infinite contrast ratio, although, in practice, reflections from the cover glass reduce the effective contrast ratio, an unavoidable issue that affects both AMOLED and IPS panels.

The PRO 5 adopts a cool white point of 7,256 K, similar to the Huawei Mate 8. This gives the display a noticeable blue tint to shades of gray and an all-white background; however, it’s not nearly as bad as the OnePlus 2 or LG G5.

Meizu’s Flyme OS does provide a slider in the settings menu to adjust the white point if the default setting is not to your liking, although the adjustment range is fairly limited. The average white point hits 7,715 K at its coldest setting and only 7,019 K at its warmest setting, which is still cooler than the ideal value and still shows a bluish-green tint on white backgrounds. It’s great that Meizu provides some level of adjustment, but it definitely needs to refine the level of control.

The cooler white point resulting from the imbalance between the blue and red primary colors hurts the PRO 5’s grayscale accuracy. Its average ΔE2000 error is far from the worst we’ve seen, but it’s still greater than 3, which is the threshold where error is noticeable but considered acceptable. The grayscale error actually remains reasonable below 50% luminance at which point the error becomes more apparent, eventually reaching a maximum error of just over 6 near 100% luminance.

The one bright spot in the PRO 5’s grayscale performance is gamma. At both 200 nits and its max brightness, gamma is equal or close to the ideal value of 2.2 and remains constant over a full luminance sweep, reducing color shifts and preserving shadow and highlight detail. 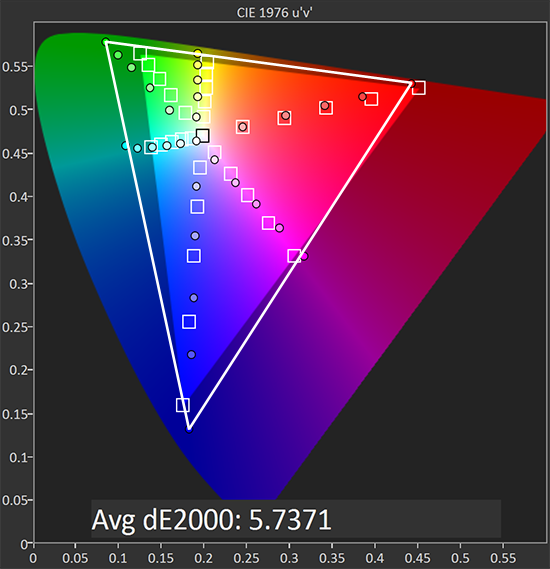 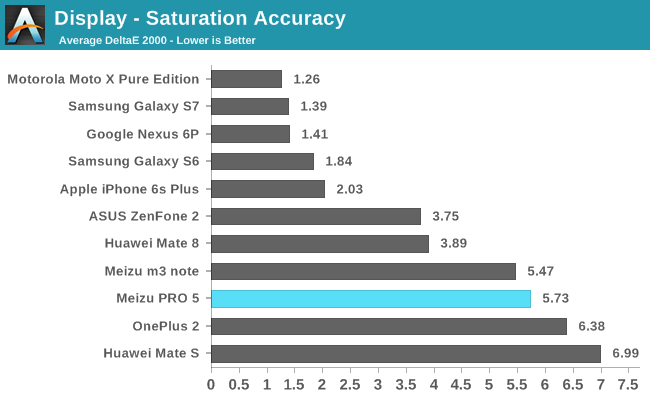 The PRO 5 uses a wide-gamut SAMOLED panel whose blue and green primary colors extend beyond the sRGB color space. Because Android does not have a color management system and the majority of content intended for computer displays uses the sRGB color space, the PRO 5’s wider color gamut only leads to inaccurate, oversaturated colors.

Looking at the saturation sweep graph, the only color that comes close to hitting all of its saturation targets is red. The other primary and secondary colors all appear oversaturated because of the PRO 5’s wider color gamut. With green and cyan, for example, a 60% saturation level is displayed as being 100% saturated in the sRGB color space. If you prefer saturated, vivid colors, this probably will not bother you. If color accuracy is important to you, however, you will be disappointed. 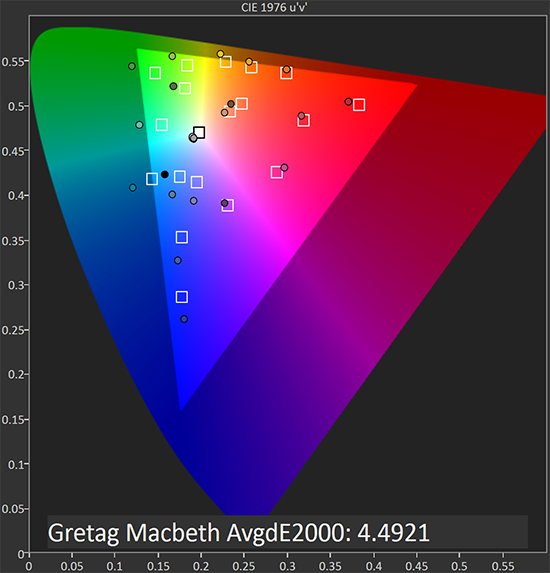 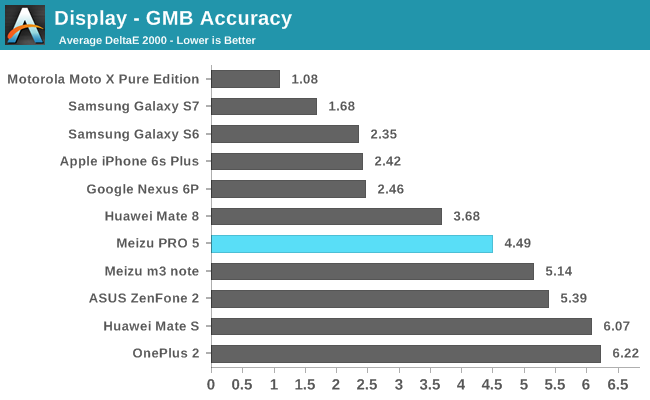 The PRO 5’s cool white point and wide gamut panel lead to mediocre color accuracy. It trails more expensive flagship devices with AMOLED panels such as the Galaxy S7 and Nexus 6P, but it also cannot match the performance of the Moto X Pure Edition’s display, a phone that is closer to the PRO 5’s price point.

The PRO 5’s display is not horrible; it does perform better than the more expensive LG G5 as well as phones closer to its own price such as the Asus ZenFone 2 or OnePlus 2. But as Meizu’s flagship device, its grayscale and color accuracy should be better. Panel brightness is also a weak point, failing to reach 400 nits even at 50% APL. Its viewing angles are excellent, however, and the display is bonded to the cover glass, reducing reflections and giving the screen a painted on look.