When you buy a Razer Blade Stealth, you get just a single CPU option in the Intel Core i7-6500U processor. This is a dual-core chip with hyperthreading, and it has a base frequency of 2.5 GHz with a turbo frequency of 3.1 GHz. On the CPU side, it’s the second fastest offering in the standard "2+2" 15W Skylake-U series, with only the i7-6600U above it . This 15-Watt processor has Intel’s HD 520 graphics, with 24 execution units and a maximum frequency of 1.05 GHz. With Razer’s gaming heritage, it would have been nice to see the new "2+3e" Iris parts with eDRAM, but likely due to the target price this wasn’t an option. Meanwhile the 8 GB of RAM is DDR3-1866 in a dual-channel configuration. 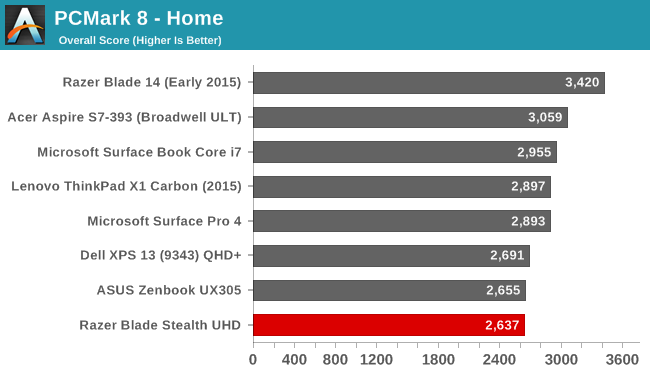 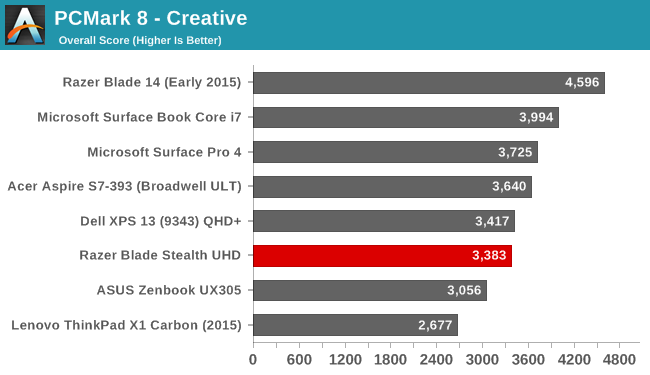 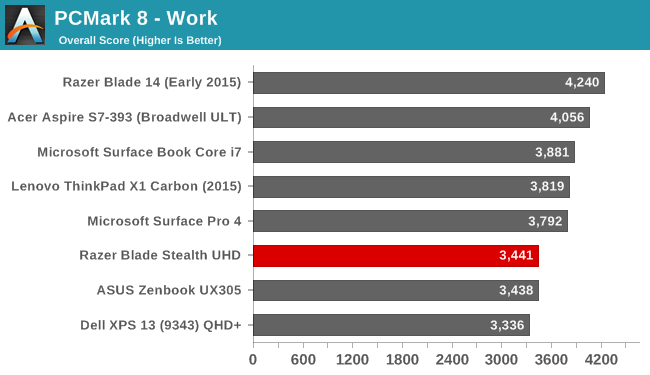 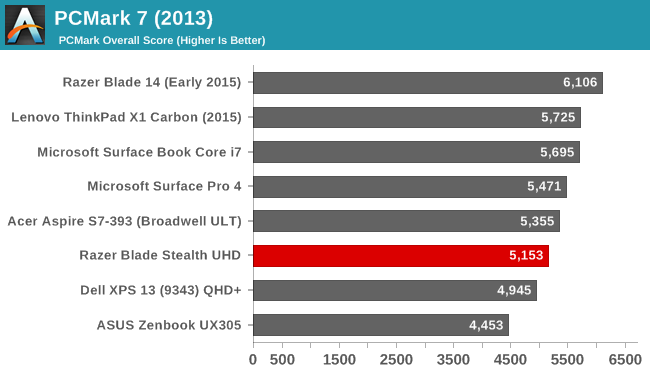 PCMark attempts to simulate real-life workloads with several sets of tests. The workload tests all aspects of the device, and factors like the display resolution can come into play here on the gaming tests. Storage has its own set of tests which recently changed, so the new results are not comparable to the old ones. The workload is varied, and the Stealth falls in-line with other similar devices, although the high resolution display certainly pulls the scores down a bit compared to the competition. 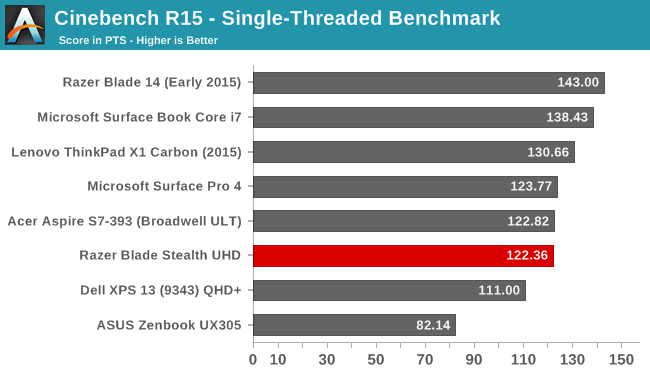 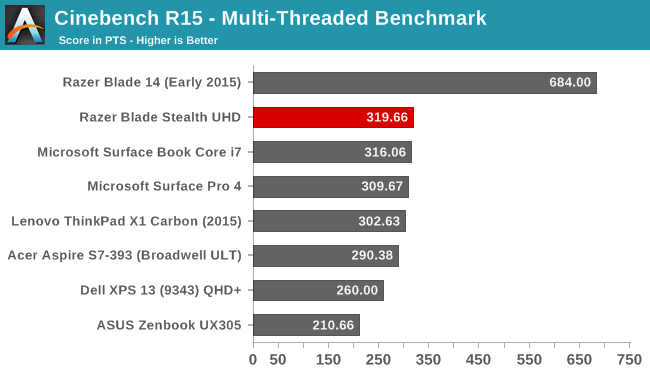 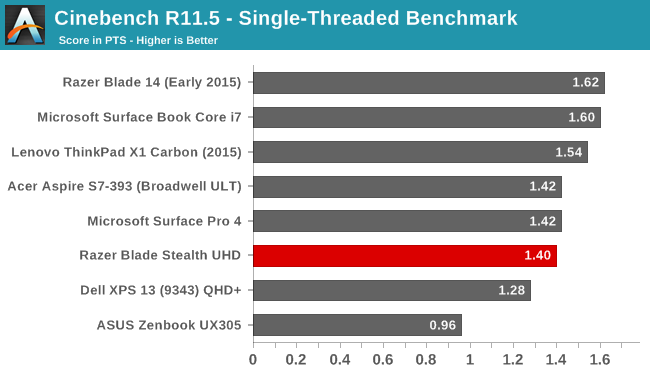 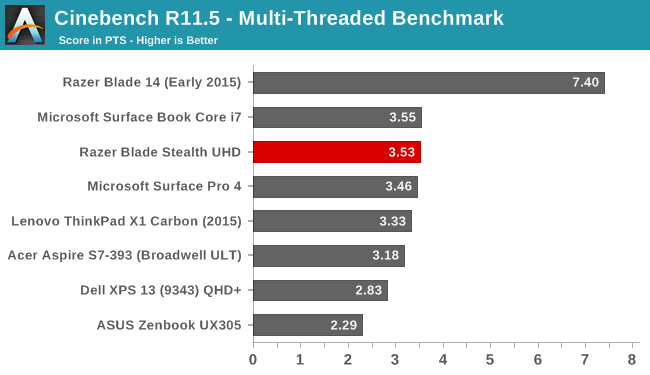 Cinebench is a rendering program, with single-thread, multi-thread, and OpenGL tests. For notebooks, we focus on the single and multi-threaded tests, and this is a good indication of CPU performance. The i7-6500U does especially well in the multi-threaded portion. 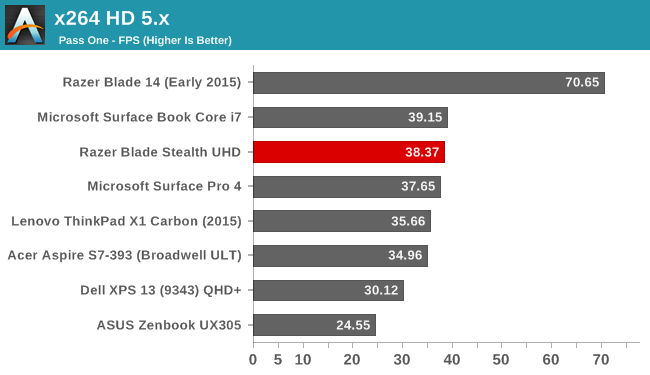 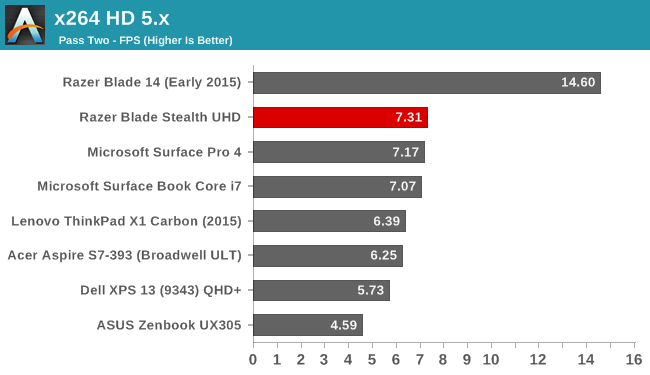 This test converts a 1080p video into the x264 format, and like Cinebench, it prefers high CPU frequencies and more cores. The Core i7 does very well in this test relative to other Ultrabooks.

Web browsing is still one of the most common tasks anyone does on a PC, so strong performance here is always a benefit. The scores below will be either done with Google Chrome as the browser if the machine was running Windows 8.1, or Microsoft Edge if the device was running Windows 10. 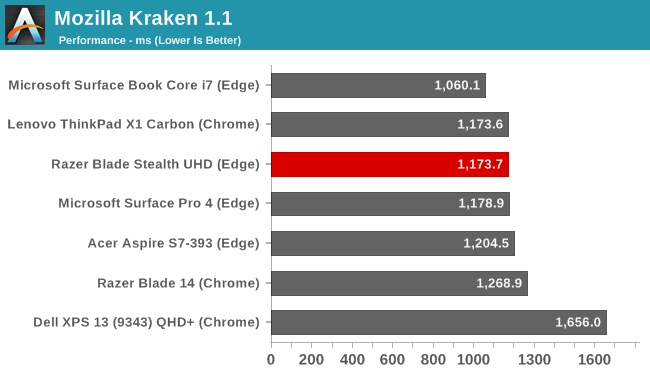 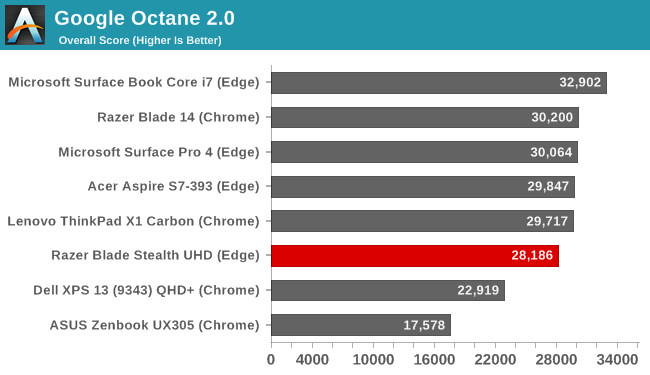 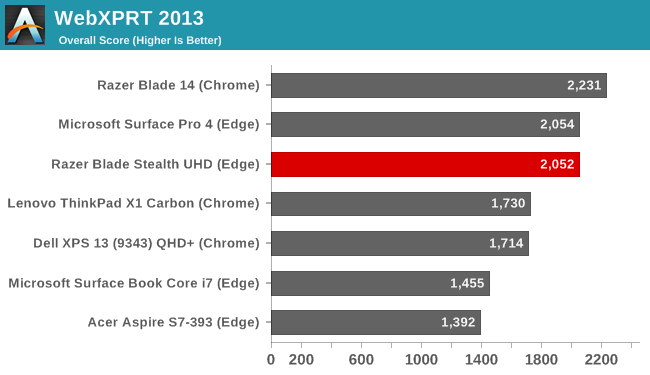 While not quite as fast as the Microsoft Surface Book, the Razer Blade Stealth still does very will in these tests.