Historically outside of the big four motherboard manufacturers mentioning a software package usually throws up some horror stories or completely blank looks. I have had manufacturers provide just the basic drivers on disk before, or that plus a basic tool with a poor GUI that ends up crashing when you select a few options. I set aside my predispositions, as with every review, and was looking forward to Supermicro’s software attempts, especially given our previous discussions about how interested they are in the consumer market. In our meetings together back at Computex I laid out the fact that their competitors have many years of experience in this, so it may take some time to match their quality. In a surprising twist, it seems that Supermicro has fallen onto their historic experience and gone not so much with a software GUI, but a web interface for their analysis tools. They call it Super Doctor 5. 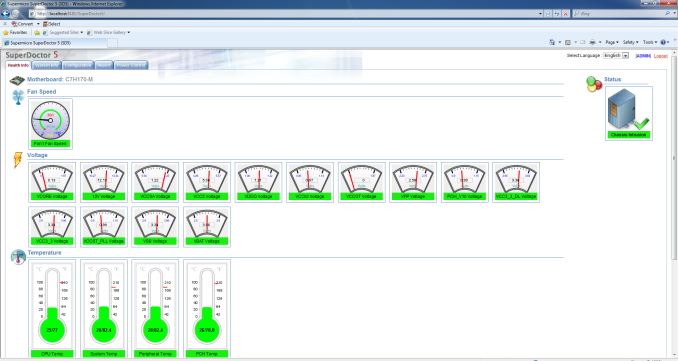 I should explain. Supermicro, as a server company, has for many years dealt with management chips (such as Aspeed variants) that allow users to access some system controls and monitoring tools via a web interface even when the system is powered but not turned on. Having created their own IMPI interfaces for these management chips for a number of years, these tools were turned to the consumer crowd. Typically a consumer motherboard will not have a management chip, so this is more just an interface for the user to see the current status or adjust some minor aspects to the system.

As shown in the graph above, after an initial install, we get the standard motherboard monitoring metrics: fan speed, voltages and temperatures. There is the motherboard name listed, but we don’t have a series of the usual information I would want: CPU installed, CPU frequency, memory installed, memory speed, storage devices attached, boot order, fan speeds, and/or perhaps even a picture of the motherboard in use. There are a lot of things possible, but this is a basic list I would expect. 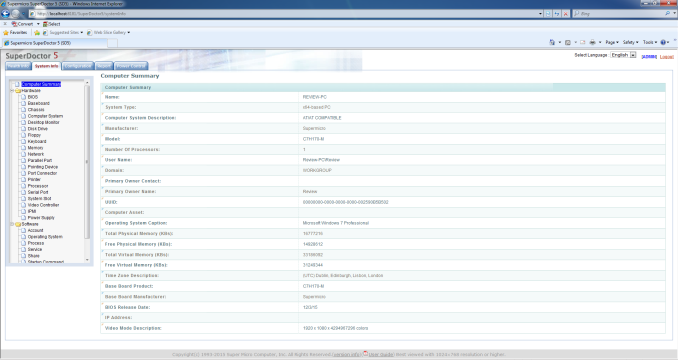 Perhaps unsurprisingly then, all the information I want is in the System Info tab along the top. The interface is easy to use, for sure: a summary with separate options on the left, with the results on the right. The problem for me is that the interface is lifeless – there’s no user experience here. A user in 2016 normally requests a tailored and styled experience, but here there is none to speak of. 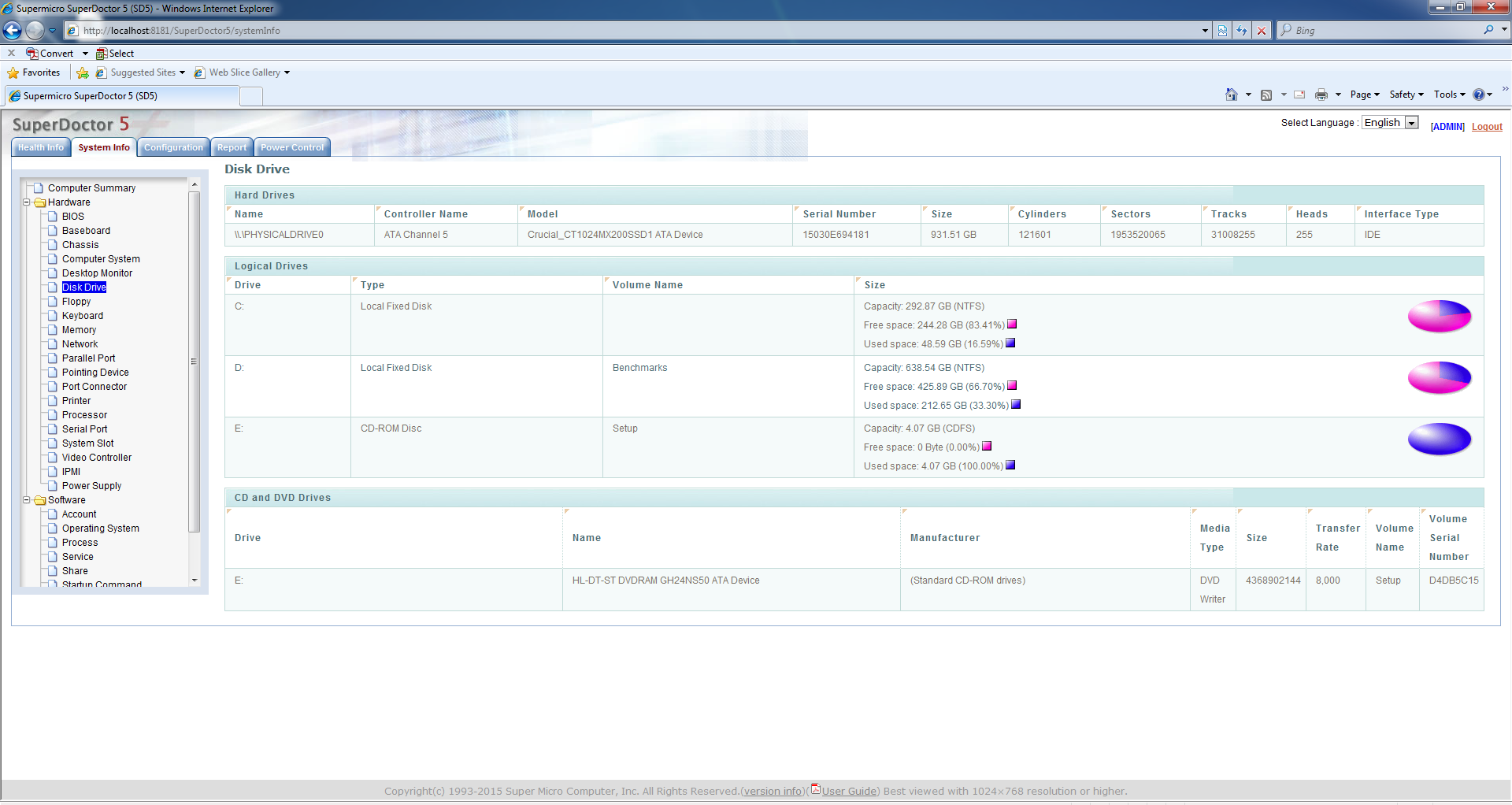 Some of the sub menus, like this Disk Drive one, is more along the lines of what looks good, although the decision for width being at 100% makes everything look stretched. 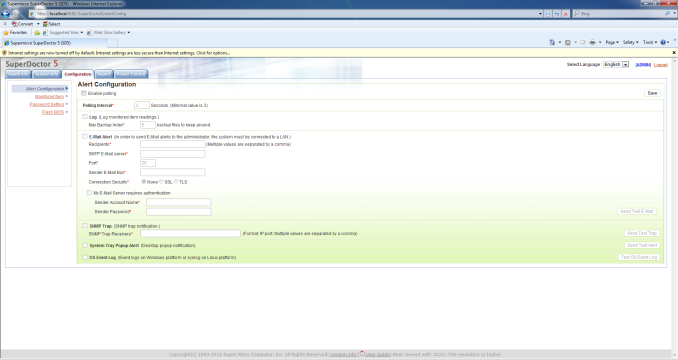 The configuration tab links in with the hardware monitoring to give a series of alerts should the system get too hot or something fail and voltages drop. A user can set up an SMTP email server which can be used to send an email when it happens – a standard thing in the server industry, but you rarely see it in the consumer part because if the system gets a low voltage point, it is more likely to shut off rather than have something always-on to send an email. There is also an option here for users to flash the BIOS. 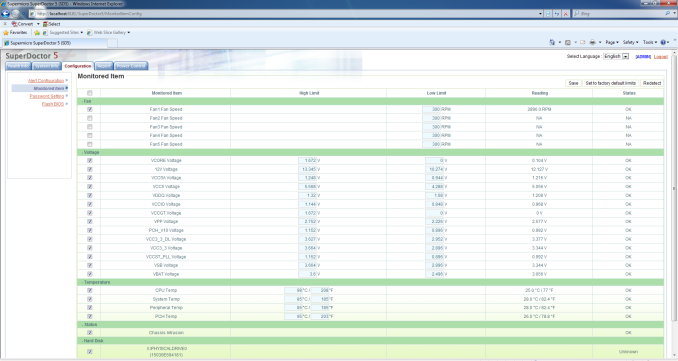 The monitoring tab shows the boundaries for each of the components the user can monitor, and makes them adjustable via text boxes. 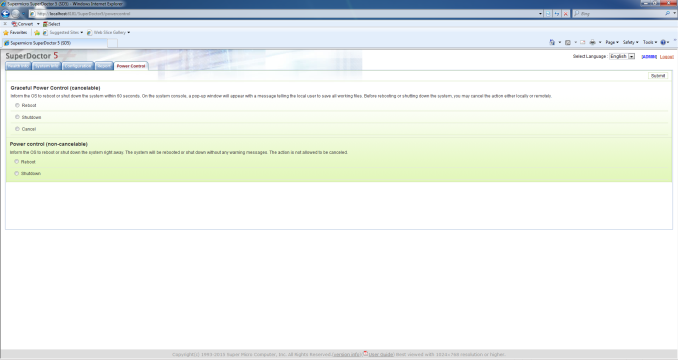 One interesting addition is this tab on power control, to turn the system off. Again, this is more of a server feature – log in through the management chip in order to restart a system that isn’t responding. There isn’t much demand for this in a management chip-less consumer based system.

Overall, Supermicro’s software package is interesting, if a bit light. Typically for a consumer product we get full fan controls, or if overclocking is enabled, the ability to adjust base frequency and voltages on the fly. There’s also the lack of added software features, which we see on other vendors, such as audio packages or gaming focused software which Supermicro doesn’t have (macros, sniper features, network management).