The C7H170-M pulled in some good low numbers for idling and load, which should be expected for a smaller motherboard without too many controllers. The power delta from long idle to load was 86W, which is one of the best of all the 100-series systems we’ve tested. 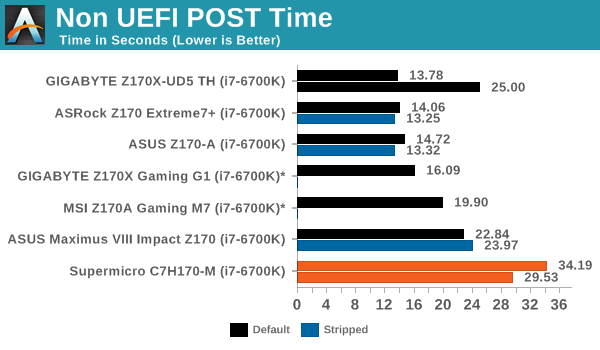 One drawback of systems outside of the normal big four vendors has historically been POST times, and the C7H170-M continues this trend, being over 30 seconds from power on to seeing Windows 7 being loaded. Cutting out the audio and network controllers for a stripped POST time reduced it to just under 30 seconds, but that is still twice as long as the best 100-series motherboards.

Using the ALC1150 codec means that the C7H170-M should have some potential, although the board comes without most of the enhancements we typically see with souped up versions of the codec. Perhaps surprisingly we get the best THD+N result out of any codec we’ve ever tested on 100-series motherboards.

Using the default Intel drivers, the USB 3.0 ports for the C7H170-M gave our worst result so far. This may be down to some BIOS tuning which the other motherboard manufacturers have been doing for many years.

DPC Latency is still an odd discussion point on 100-series. We’ve seen ASUS get it right, MSI not too far behind but the others are playing catchup.