For $128, it is perhaps odd that we’re not seeing USB 3.1 here as it is one of the primary reasons for users to upgrade to a Skylake based system. The audio and networking portion are good for the price, and there are certainly plenty of USB 3.0 ports/headers to make up for the deficit. The lack of fan controls is somewhat of an issue, especially with all the headers, and for this price we would have also liked to have seen a two-digit debug to help with errors. 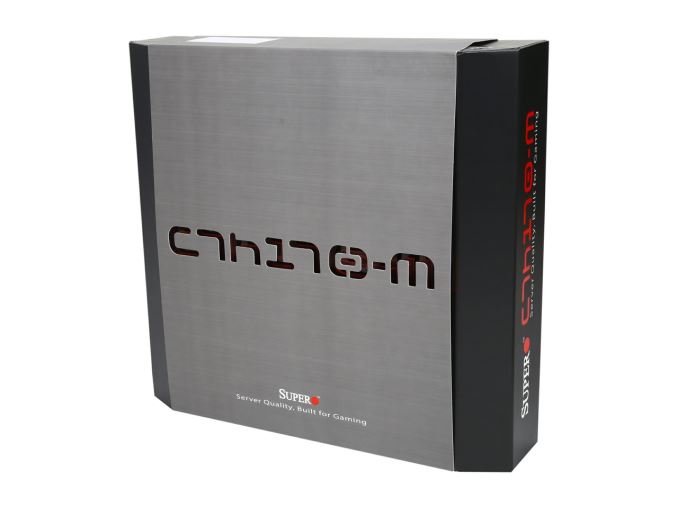 The C7H170-M certainly comes in an interesting box shape, but in the box there isn’t much to talk about – but this is to be expected for a $128 motherboard. The double length SATA cables are interesting though, as it’s a first on a motherboard that I’ve ever tested. Perhaps Supermicro’s customer research teams gave SATA cable length as one of their primary concerns? Not sure there.

Supermicro’s gaming line is designated ‘SuperO’, and much like almost all of the gaming motherboard lines on the market comes in a red and black livery. Whether you like the red plus black combination, it seems that Supermicro is coming up against a few aesthetic issues that the other motherboard manufacturers have come up against: placing the white box around every part for the automated placement machines detracts from the overall look. This will probably be looked at but take time to adjust, as it did with the other manufacturers. 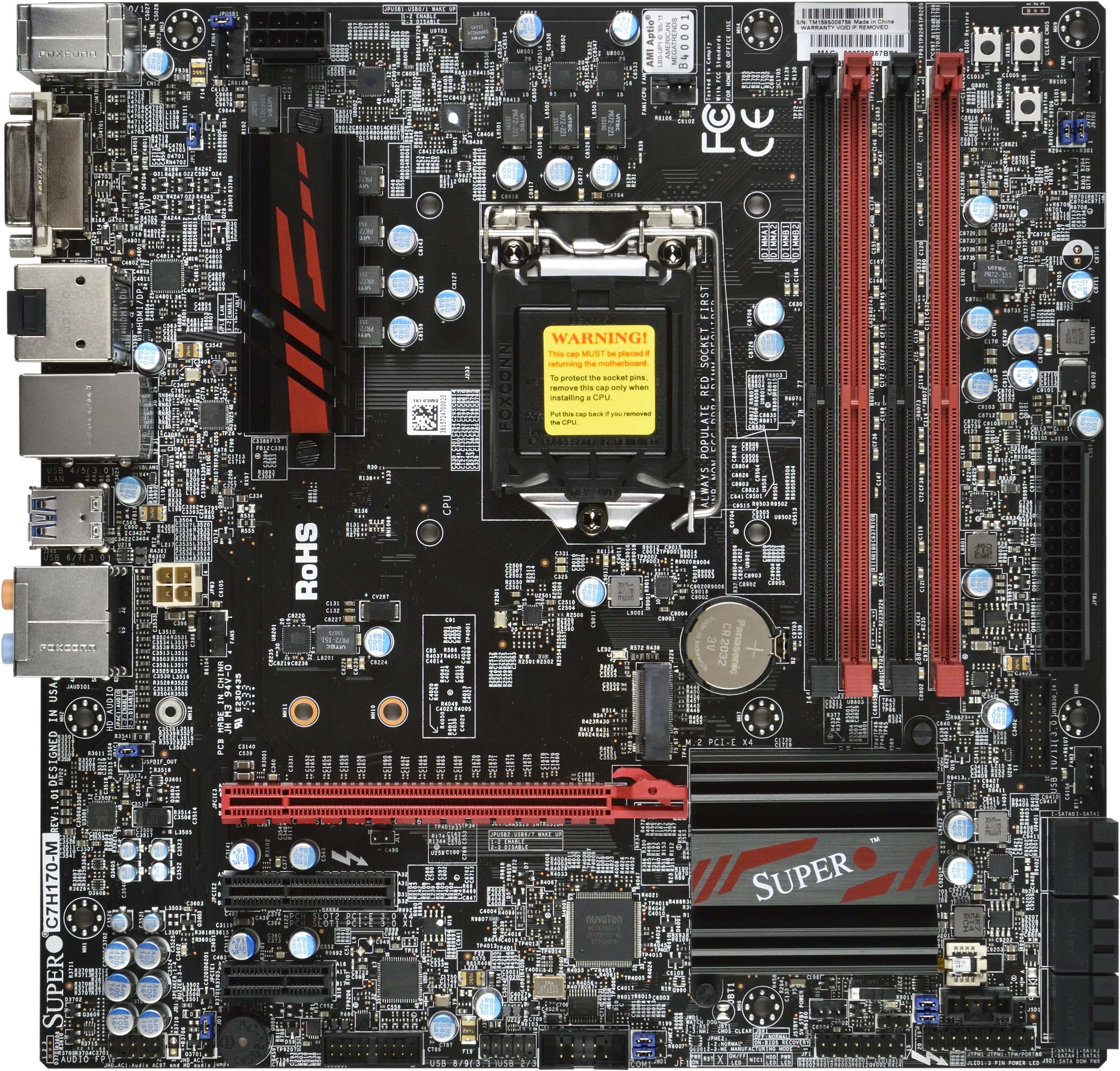 By virtue of this being a H series chipset, there is not much of the over engineering we see on the Z series chipset based motherboards. The power delivery has a small heatsink over one part of it rather than the whole set, and this doesn’t extend over other areas or to the chipset heatsink because it doesn’t really need to. The socket area around the CPU bracket is very busy, with plenty of standard filter caps and resistors, which also takes away from the look. I would also point out that the DRAM spacing between the slots is irregular, which also looks odd and given this I would assume that Supermicro is not implementing a T-topology memory design.

For users keeping track of fan header placement, the socket has immediate access to all five – three 4-pin headers along the top (the CPU one is the one in the middle), one 4-pin on the left near the 4-pin power, and one to the right above the SATA ports.

On the top right side of the motherboard, we have three buttons. In most motherboard designs, these would be power, reset and reset BIOS – but here they are power, reset BIOS and BIOS restore. The last one is to restore the BIOS in the event of a corruption – because Supermicro does not have an easy way to update the BIOS yet, any attempt to flash the BIOS is more risky than the other manufacturers right now, so this button may be vital in some circumstances.

At this point I want to talk about the excessive amount of jumpers on this motherboard. 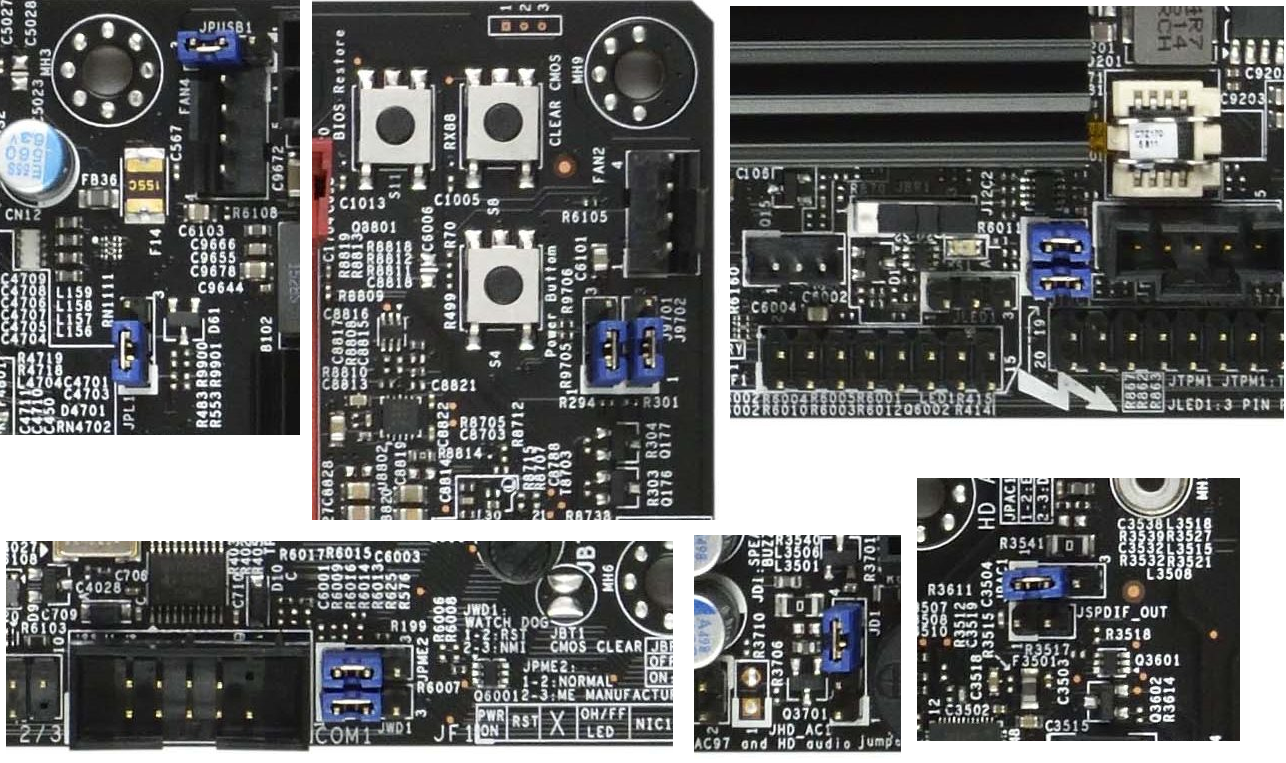 In total I count ten, most of which are not labelled in the materials which leads me to believe that they’re just for internal testing when designing the motherboard. These are typically removed in the final design, but for whatever reason they are kept here.

Most of them are on the bottom of the motherboard, and this is where we find the second USB 3.0 header (the first being above the SATA slots), a TPM header, the front panel header, a COM header, a USB header and a Thunderbolt card header. 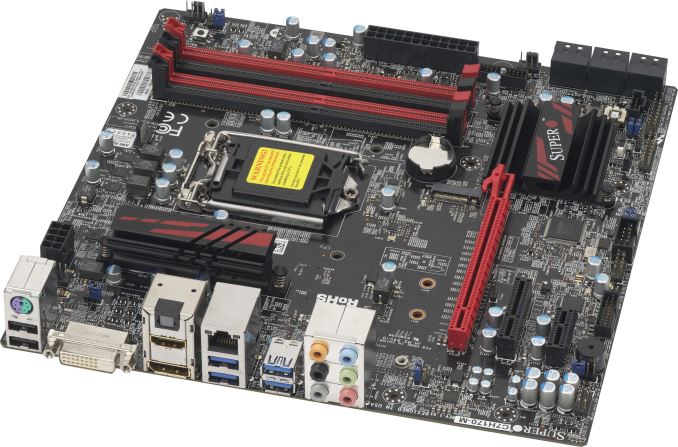 There is no special shielding here in play for the Realtek ALC1150 audio codec on the left hand side, but it seems to perform well in our tests. The PCIe layout gives a single PCIe 3.0 x16 from the CPU – the H series chipset means that Supermicro has to play by the rules and only offer a single PCIe slot from the CPU when the H-series is in use. The other two PCIe slots are an x4 and x1 from the chipset – I would have preferred if these were open ended, as this would allow other x8 or x16 cards to be used, albeit with limited bandwidth. Above the PCIe slots is our M.2 slot, supporting PCIe 3.0 x4 M.2 drives.

For reference, the Supermicro C7H170-M, on our testing BIOS 1.0c, MCT was not enabled by default. Also, the FCLK 10x ratio was not present in the BIOS tested at the time of testing.