Now that we’ve had the chance to look at DirecX 12 performance, let’s take a look at things with DirectX 11 thrown into the mix. As a reminder, while the two rendering paths are graphically identical, the DirectX 12 path introduces the latter’s multi-core scalability along with asynchronous shading functionality. The game and the underlying Nitrous engine is designed to take advantage of both, but particularly the multi-core functionality as the game pushes some very high batch counts. 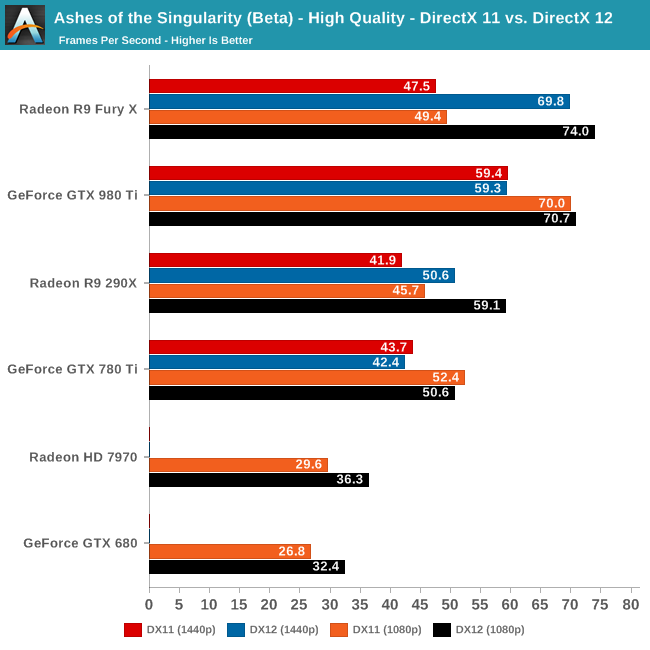 Given that we had never benchmarked Ashes under DirectX 11 before, what we had been expecting was a significant performance regression when switching to it. Instead what we found was far more surprising.

On the RTG side of matters, there is a large performance gap between DX11 and DX12 at all resolutions, increasing with the overall performance of the video card being tested. Even on the R9 290X and the 7970, using DX12 is a no brainer, as it improves performance by 20% or more.

The big surprise however is with the NVIDIA cards. For the more powerful GTX 980 Ti and GTX 780 Ti, NVIDIA doesn’t gain anything from the DX12 rendering path; in fact they lose a percent or two in performance. This means that they have very good performance under DX11 (particular the GTX 980 Ti), but it’s not doing them any favors under DX12, where as we’ve seen RTG has a rather consistent performance lead. In the past NVIDIA has gone through some pretty extreme lengths to optimize the CPU usage of their DX11 driver, so this may be the payoff from general optimizations, or even a round of Ashes-specific optimizations. 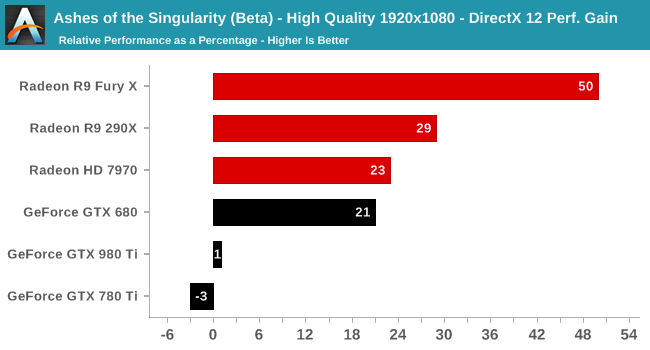 Finally, right in the middle of all of this is the GTX 680. Given what happens to the architecturally similar GTX 780 Ti, this may be a case of GPU memory limitations (this is the only 2GB NVIDIA card in this set), as there’s otherwise no reason to expect the weakest NVIDIA GPU to benefit the most from DX12.

Overall then this neatly illustrates why RTG in particular has been so gung-ho about DX12, as Ashes’ DX12 path has netted them a very significant increase in performance. To some degree however what this means is a glass half full/half empty full situation; RTG gains so much from DX12 in large part because of their poorer DX11 performance (especially on the faster cards), but on the other hand a “simple” API change has unlocked a great deal of GPU power that wasn’t otherwise being used and vaulted them well into the lead. As for NVIDIA, is it that their cards don’t benefit from DX12, or is it that their DX11 driver stack is that good to begin with? At the end of the day Ashes is just a single game – and a beta game at that – but it will be interesting to see if this is a one-off situation or if it becomes recurring.