Shifting gears, let’s take a look at multi-GPU performance on the latest Ashes beta. The focus of our previous article, Ashes’ support for DX12 explicit multi-GPU makes it the first game to support the ability to pair up RTG and NVIDIA GPUs in an AFR setup. Like traditional same-vendor AFR configurations, Ashes’ AFR setup works best when both GPUs are similar in performance, so although this technology does allow for some unusual cross-vendor comparisons, it does not (yet) benefit from pairing up GPUs that widely differ in performance, such as a last-generation video card with a current-generation video card. None the less, running a Radeon and a GeForce card together is an interesting sight, if only for the sheer audacity of it. 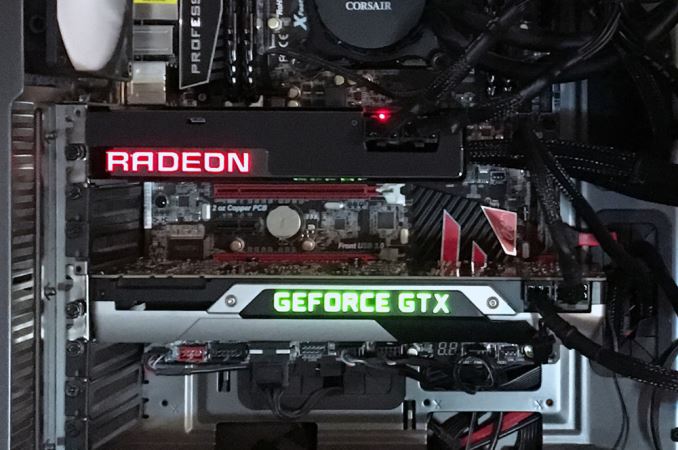 Meanwhile as a result of the significant performance optimizations between the last beta build and this latest build, this has also had an equally significant knock-on effect on mutli-GPU performance as compared to the last time we looked at the game. 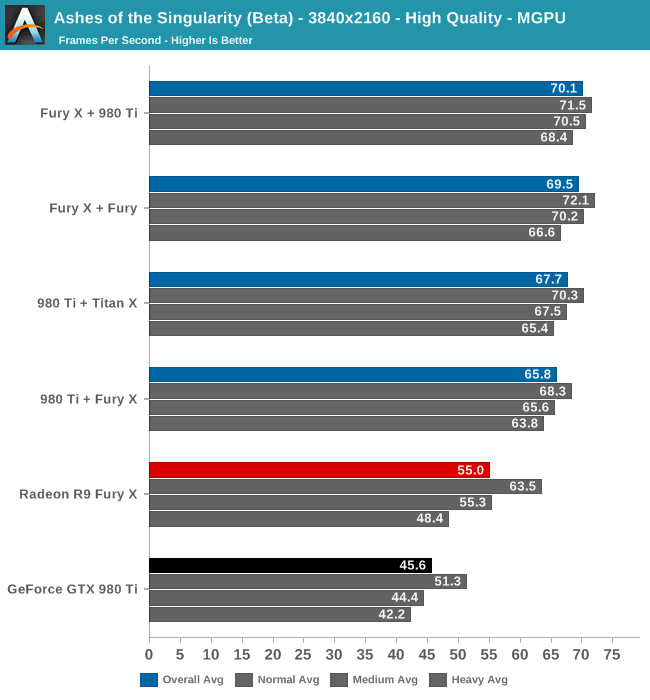 Digging deeper, what we find is that even at 4K we’re actually CPU limited according to the benchmark data. Across all four multi-GPU configurations, our hex-core overclocked Core i7-4960X can only setup frames at roughly 70fps, versus 100fps+ for a single-GPU configuration.

The increased CPU load from utilizing multi-GPU is to be expected, as the CPU now needs to spend time synchronizing the GPUs and waiting on them to transfer data between each other. However dropping to 70fps means that Ashes has become a surprisingly heavy CPU test as well, and that 4K at high quality alone isn’t enough to max out our dual GPU configurations. 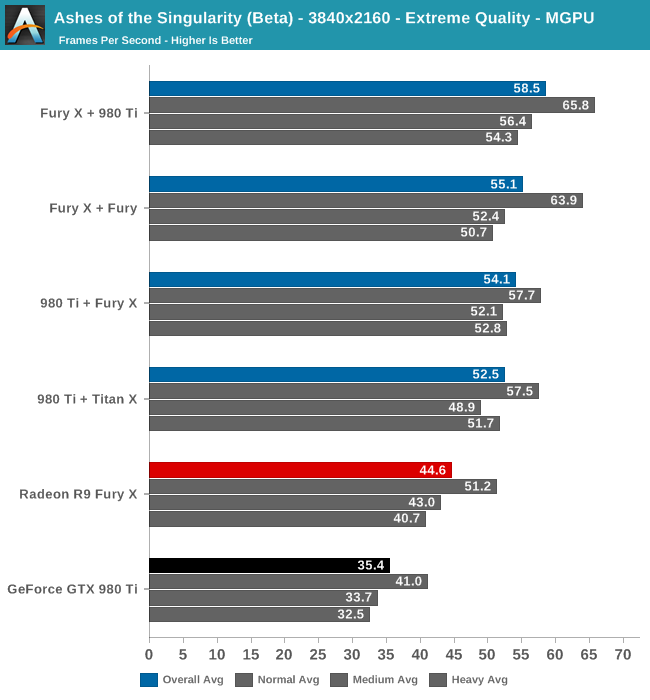 Cranking up the quality setting to Extreme finally gives our dual-GPU configurations enough of a workload to back off from the CPU performance cap. Once again the fastest configuration is the Fury X + 980 Ti, which lands just short of 60fps, followed by the Fury X + Fury configuration at 55.1fps. In our first look at Ashes multi-GPU scaling we found that having a Fury X card as the lead card resulted in better performance, and this has not changed for the newest beta. The Fury continues to be faster at reading data off of other cards. Still, the gap between the Fury X + 980 Ti configuration and the 980 Ti + Fury X configuration has closed some as compared to last time, and now stands at 11%.