The power consumption at the wall was measured with a 1080p display being driven through the HDMI port. In the graphs below, we compare the idle and load power of the GIGABYTE GB-BXi7H-5500 with other low power PCs evaluated before. For load power consumption, we ran Furmark 1.15.0 and Prime95 v28.5 together. The numbers are not beyond the realm of reason for the combination of hardware components in the machine. 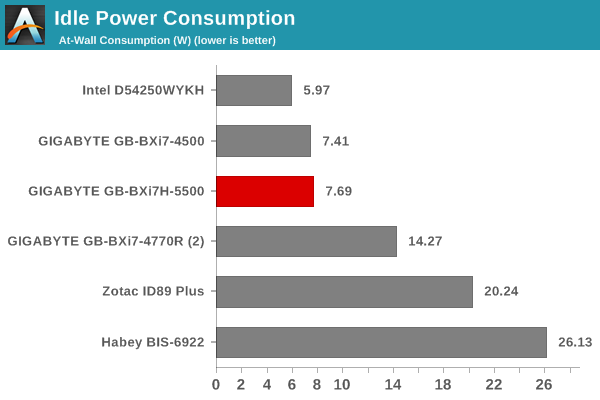 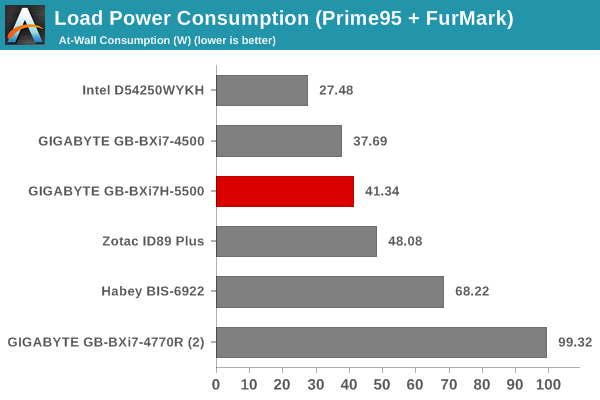 The slightly higher base clocks in the Core i7-5500U (compared to the Core i7-4500U) are probably the reason for the Haswell-based unit appearing more power efficient than the Broadwell counterpart - but, make no mistake here - the Broadwell unit wins the performance per watt test quite easily.

The evaluation of the thermal performance was performed by monitoring the various clocks in the system as well as the temperatures with the unit when subject to the following workload. We start with the system at idle, followed by 30 minutes of pure CPU loading. This is followed by another 30 minutes of both CPU and GPU being loaded simultaneously. After this, the CPU load was removed, allowing the GPU to be loaded alone for another 30 minutes. 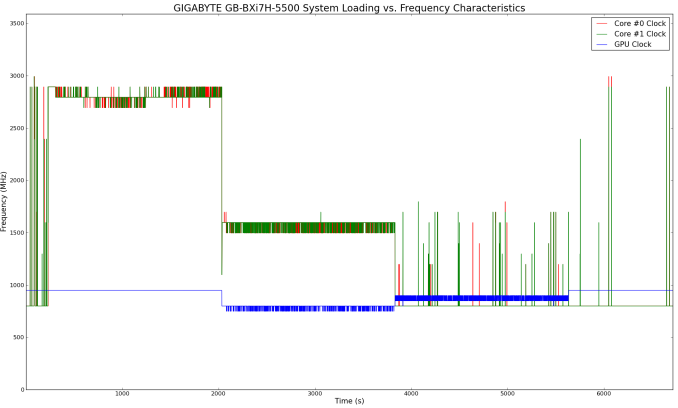 In the pure CPU loading scenario, the cpre frequencies stay well above the suggested base value of 2.4 GHz (indicating that GIGABYTE's trust in their cooling solution). The core temperature doesn't cross 90 C during this time (the junction temperature is 105 C). On the other hand, when the CPU and GPU are both loaded, the frequencies drop down to around 1.6 GHz for the cores. The GPU is advertised to run at a base clock of 300 MHz, with a turbo mode of 950 MHz. The actual frequency stays above 800 MHz comfortably throughout our stress test. In the absence of any CPU load, the cores drop down to 800 MHz. The temperatures are also below 80 C throughout the time that the GPU is loaded up. 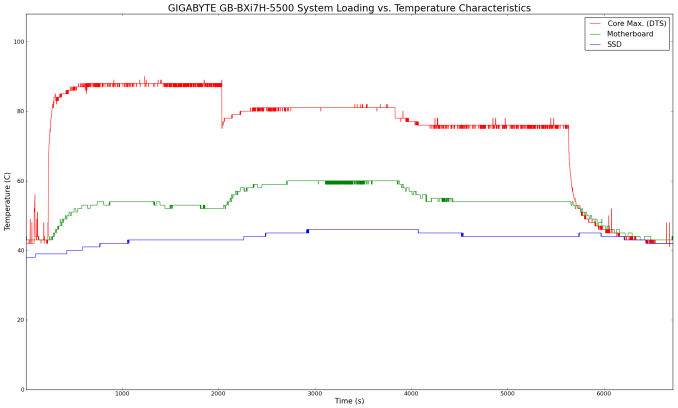 All in all, the thermal solution is very effective. Given that the acoustic side-effects were not irksome (subjectively), we wonder if GIGABYTE has missed a trick by dialing down the overclocking and not allowing the full performance potential of the system to come through.