The GIGABYTE GB-BXi7H-5500 is a compact PC, but, thanks to the 15W TDP CPU inside, it doesn't require a noisy thermal solution like what we saw in the BRIX Pro and BRIX Gaming units. Subjectively speaking, the unit is silent for most common HTPC use-cases. Only under heavy CPU / GPU loading does the fan become audible. However, as mentioned before, it still makes a good HTPC for folks who don't want to pay the premium for a passively cooled system.

Starting with Haswell, Intel, AMD and NVIDIA have been on par with respect to display refresh rate accuracy. The most important refresh rate for videophiles is obviously 23.976 Hz (the 23 Hz setting). As expected, the GIGABYTE GB-BXi7H-5500 has no trouble with refreshing the display appropriately in this setting. In fact, in our recent tests, Intel's accuracy has been the best of the three. 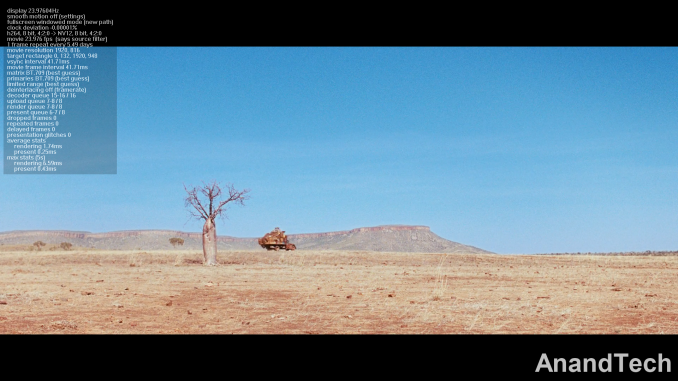 Evaluation of OTT playback efficiency was done by playing back our standard YouTube test stream and five minutes from our standard Netflix test title. Using HTML5, the YouTube stream plays back a 720p encoding. Since YouTube now defaults to HTML5 for video playback, we have stopped evaluating Adobe Flash acceleration. Note that only NVIDIA exposes GPU and VPU loads separately. Both Intel and AMD bundle the decoder load along with the GPU load. The following two graphs show the power consumption at the wall for playback of the HTML5 stream in Mozilla Firefox (v 35.0). 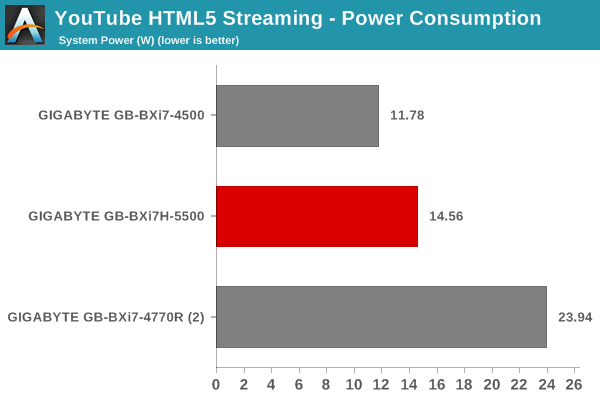 GPU load was around 13.03% for the YouTube HTML5 stream and 4.25% for the steady state 6 Mbps Netflix streaming case. 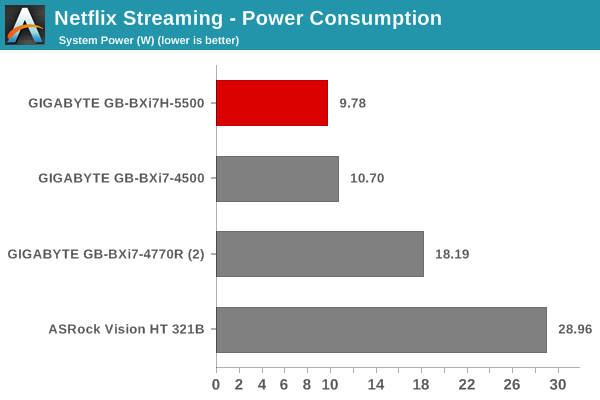 In order to evaluate local file playback, we concentrate on EVR-CP, madVR and Kodi. We already know that EVR works quite well even with the Intel IGP for our test streams. Under madVR, we used the default settings (as it is well known that the stressful configurations don't work even on the Iris Pro-equipped processors). The decoder used was LAV Filters bundled with MPC-HC v1.7.8. LAV Video was configured to make use of Quick Sync.

The Intel HD Graphics 5500 throws us a nice surprise by managing to successully keep its cool with the madVR default settings. Only the 4Kp30 stream downscaled after decode for 1080p playback choked and dropped frames. Otherwise, there was no trouble for our test streams with either Kodi or MPC-HC / EVR-CP.