Introduction to Cortex A12 & The Front End

At a high level ARM’s Cortex A12 is a dual-issue, out-of-order microarchitecture with integrated L2 cache and multi-core capable.

The Cortex A12 team all previously worked on Cortex A9. ARM views the resulting design as not being a derivative of Cortex A9, but clearly inspired by it. At a high level, Cortex A12 features a 10 - 12 stage integer pipeline - a lengthening of Cortex A9’s 8 - 11 stage pipeline. The architecture is still 2-wide out-of-order, but unlike Cortex A9 the new tweener is fully out of order including load/store (within reason) and FP/NEON. 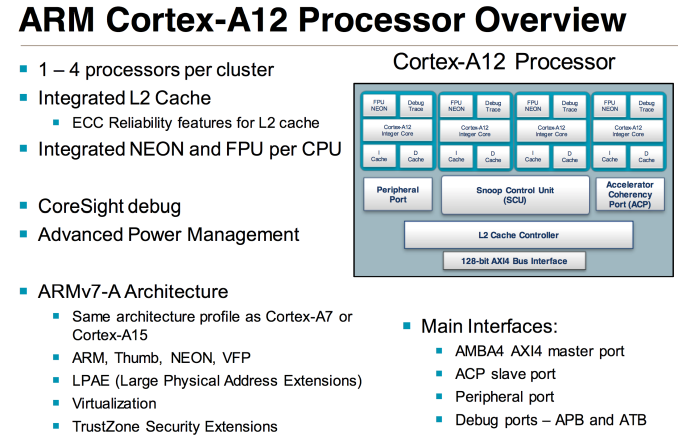 Cortex A12 retains feature and ISA compatibility with ARM’s Cortex A7 and A15, making it the new middle child in the updated microprocessor family. All three parts support 40-bit physical addressing, the same 128-bit AXI4 bus interface and the same 32-bit ARM-v7A instruction set (NEON is standard on Cortex A12). The Cortex A12 is so compatible with A7 and A15 that it’ll eventually be offered in a big.LITTLE configuration with a cluster of Cortex A7 cores (initial versions lack the coherent interface required for big.LITTLE). 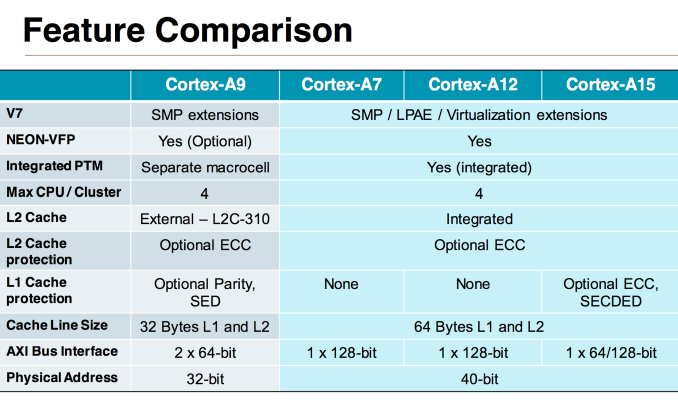 In the Cortex A9, ARM had a decoupled L2 cache that required some OS awareness. The Cortex A12 design moves to a fully integrated L2, similar to the A7/A15. The L2 cache operates on its own voltage and frequency planes, although the latter can be in sync with the CPU cores if desired. The L2 cache is shared among up to four cores. Larger core count configurations are supported through replication of quad-core clusters.

The L1 instruction cache is 4-way set associative and configurable in size (32KB or 64KB). The cache line size in Cortex A12 was increased to 64 bytes (from 32B in Cortex A9) to better align with DDR memory controllers as well as the Cortex A7 and A15 designs. Similar to Cortex A9 there’s a fully associative instruction micro TLB and unified main TLB, although I’m not sure if/how the sizes of those two structures have changed. 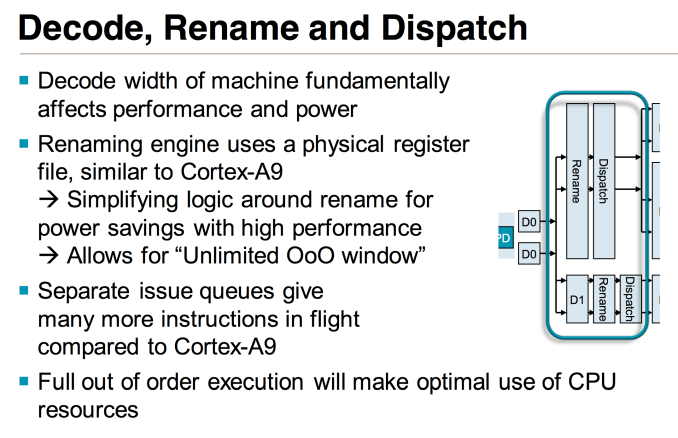