The three issue queues are as follows: one for integer, one for FP/NEON and one for loads and stores. ARM provided bits and pieces of an architectural block diagram for the Cortex A12. I reconstructed one as best as I could below. The blue blocks indicate in-order components of the design, while the pink/salmon blocks are out-of-order. You can toggle between the A12 and A9 diagrams to see how things have changed. 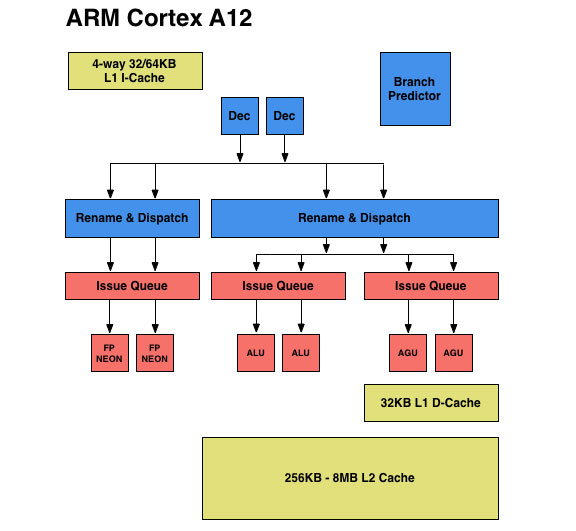 Cortex A12 retains the two integer pipelines of the Cortex A9, but adds support for integer divides (like the A7 and A15, other A-series architectures generally lacked support for hardware int divides). The rest of the integer execution capabilities are unchanged.

The FP/NEON units are vastly improved on the Cortex A12. When the Cortex A9 was first introduced, NEON code was rarely used which even lead NVIDIA to dropping NEON support altogether in Tegra 2. Times quickly changed as NEON code is widely used in Android and mobile applications.

The Cortex A12 design retains separate physical register files for integer and FP operations, but the RFs are larger than in Cortex A9.

Although Cortex A9 was considered an out-of-order microarchitecture, all FP and NEON instructions were executed in-order. With Cortex A12, ARM moves to a fully out-of-order architecture, at least as far as non-memory-ops are concerned. The FP/NEON issue queue now dual-issues into two FP/NEON pipes, both of which operate fully out-of-order. The FP/NEON pipes are also more tightly coupled, allowing for quicker data movement between FP and Integer units.

The improvements to the FP/NEON side are expected to show up quite nicely in benchmarks. ARM shared performance data using an FFMPEG workload on simulated Cortex A9 and Cortex A12 designs at the same frequency with the same number of cores (1): 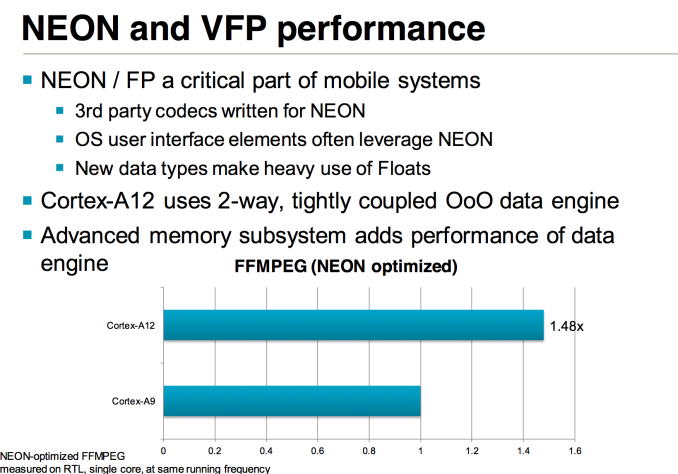 A 48% increase in NEON performance isn’t unexpected at all given the magnitude of improvements to this part of the execution engine. 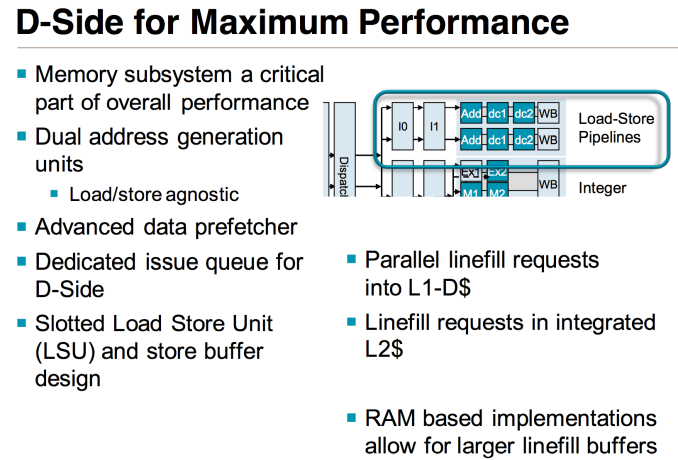 The final issue queue feeds the two load-store pipelines with two AGUs, once again a doubling from what was present in the Cortex A9 design. Each pipeline is equally capable (load/store agnostic) and mostly out-of-order (limits on what you can re-order if there are address dependencies between loads). By comparison, the load/store pipe in Cortex A9 was fully in-order.