Designed for gaming use, the BenQ puts a lot of weight into its 120 Hz refresh rate. If you haven’t used a 120 Hz display before, you really need to do it in person to see the extra fluidity that it offers in comparison to 60 Hz. It isn’t something that can be captured in video, since it would be seen on a 60 Hz display, but in person it’s impossible to miss. Simple things like a mouse cursor or dragging a window are much more fluid. Playing games, animations and movement are much more fluid than with 60 Hz, and the change is almost instant to notice. Even myself, who is a casual gamer at best, can notice the difference that it makes in fluidity.

The downsides here are that all 120 Hz monitors seem to currently be limited to 1080p resolution, though some people are overdriving their import 27” IPS LCDs to do 120 Hz as well. Moving to 120 Hz at a higher resolution would also require a much more expensive graphics card, so I can understand the focus on 1080p because of that, but it also makes the monitor not as nice for general work as a higher resolution display is now.

As far as the gaming modes and the quick keys, what these modes are really doing is radically altering the gamma, going from the 2.2 that we might generally want to something closer to 1.4 in my measurements. This brings out things that might be hidden in the shadows, but in doing so it also destroys all the shadow detail and leads to a very washed out, flat looking image that isn’t attractive at all. It might offer you a bit of a performance advantage by seeing more things and not missing someone that is hidden away, but it isn’t nearly as enjoyable to look at in normal use. Perhaps if I was playing in a competitive game against someone I would utilize them, but for solo play I’m almost certain to go back to the calibrated settings, as I far and away prefer the higher contrast ratios and visual pop that it offers.

As many people pointed out in the comments, you can use Lightboost, and some trickery, to get the XL2720T to display at 120 Hz with a strobing backlight. Working much more like a CRT, where you have black frames between objects and not object permenance on the screen, this should provide for better motion resolution and a more CRT-like feel. After I was made aware of this (it's not in the documentation with the monitor, or mentioned by BenQ, or really officially supported) and hooked the XL2720T back up and tested it in this mode.

One thing this does do it lock out all the picture controls except color and brightness. You also take a significant hit to light output in this mode. Motion does look smoother, that I can say for sure. However the extra flickering that this backlight causes also gives me a bit of a headache. I went away from CRTs to LCDs a decade ago because the flicker caused more eye-strain for me, and with the BenQ it seems to bring that feeling back. Games were smoother than before, with a noticeable difference in motion resolution, but it wasn't perfect. Losing all adjustments and the light output is a downside as well.

I also ran the numbers on the display with Lightboost enabled. As all of the controls except for Contrast are really locked off from you, then you need to rely on a video card LUT to calibrate and get anything remotely close to accurate. I also found the maximum contrast level I could drive was 48 without having severe clipping of whites. At this setting your maximum light output is 129 cd/m2. With the contrast at maximum I got 140 cd/m2 but also severe highlight clipping and color distortions.

Lightboost also causes a severe blue-shift in the image. I mean an extreme shift in the image. If you've read our display reviews, you'll know that 6503K is the ideal color temperature (CCT). Lower than that is reddish and higher is bluish. Sometimes we see a display come in around 10,000-12,000K, but that's very high. With Lightboost enabled, the BenQ has an average CCT of 36,025K. It is very, very blue. Here's a table with the data for the BenQ with Lightboost enabled, and after calibration with Lightboost on.

So if you calibrate it, you can get a decent image with Lightboost enabled, but you also have to trade your contrast ratio and peak light output for it. It has to reduce Blue all through the video cart LUT to remove that horrible color cast on the image, and doing that drops the light output. At the default settings, the color tint is extreme and while you might be OK with it for gaming, for any daily use even those unconcerned with a calibration might find it to be way too blue for their liking. Post calibration it looks fine, though. All of the Pre- and Post-calibration charts are in the gallery below.

I wish they would make this a normal choice to use the monitor in, and not hidden away and requiring research and work. If motion resolution is the most important aspect to you, then you'll want to at least test out Lightboost mode on the XL2720T. Just know it does entail a few trade-offs as well.

For lag testing, I’ve settled on using the Leo Bodnar lag tester for reviews. Talking to other reviewers with it, our data indicates consistent results with everything except plasma TVs at this point, and that’s not an issue for PC monitors. It means I can only test 1080p60 over HDMI or DVI inputs, but that is similar to the limitations that SMTT introduced. It also lets me measure across the screen at three points and provide different data that I can then average to an overall lag number. The BenQ measures out at 22.1 ms of lag using the Leo Bodnar test. Using the FPS mode or the regular mode led to the exact same scores, so that didn’t influence it at all. I didn’t notice any perceptible lag in use, but that number is higher than I expected it to be. 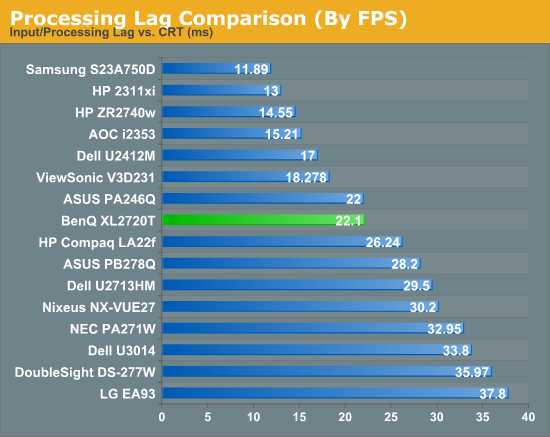