We briefly touched upon the functioning of the UFO Power Center in the previous section. An important aspect of such a consumer device is the presentation of the generated data. Towards this, Visible Energy currently provides two ready-to-use solutions. One is the iOS app which provides instant updates and actions while on the local network. The other is the cloud-based service portal where any updates made are fetched by the UFO periodically. I am actually doing a bit of disservice to the unit by not reviewing the iOS app, as I have never been a fan of (nor do I ever plan on being one) Apple’s restrictive ecosystem. That said, the iOS app is actually coded in Javascript/HTML5 using the Phonegap framework. This is also available on Android, and so, it is quite possible that we might see an Android app sometime in the future.

Setting up the UFO Power Center in the absence of an iOS device is a bit of a challenge for the non-tech savvy folks. Visible Energy does provide step-by-step instructions, and the steps we took are presented in the gallery above. In the factory reset state, the UFO Power Center creates a Wi-Fi access point with an SSID of the form VE_UFO_<Serial Number Last 6 Digits>. A PC or laptop connects to this SSID and creates an ad-hoc network. By default, DHCP is disabled, and the UFO Power Center brings itself up with an IP address of 192.168.1.141.

It is important to note that the UFO Power Center doesn’t run a full-blown web server, but generates these basic configuration pages on-the-fly in response to HTTP requests. Clicking the ‘Setup’ button allows the user to enter the SSID, encryption type and key. After a restart, the unit automatically obtains an IP address through DHCP from the router. Cloud-based management can be achieved through an account on the Visible Energy service portal. The registration key obtained by accessing the unit’s IP through a browser can be used to add it to the account registered with Visible Energy.

One of the important aspects to note about the cloud interface is the fact that data is never pulled from the device over the Internet. Rather, the device actively pushes data out to the server every minute and also obtains any pending commands (such as the change in state of a socket / change in socket status schedule / socket name change etc.).

Each device page in the service portal presents an overview of the current power consumption (total and on-device basis), cost to run the device connected to each outlet and how it compares to what it was on the previous day / week, name of each socket and an ON / OFF control for each of them. A one shot timer to alter the socket status can be set up for a future timestamp. In addition, there is some support for basic home automation ‘scenes’ with the roles feature. By default, all the sockets are set up with a neutral role. One of them can be tagged as the ‘master’ socket with a power threshold (low, medium, high or high+ corresponding to 2,5,10 and 35W respectively). Any socket tagged as a ‘slave’ gets turned on when the master socket’s power consumption goes above the configured power threshold. Correspondingly, it gets turned off when the power consumption of the device on the master socket goes below the power threshold. This is useful in scenarios where, say, the AV receiver needs to be turned on only when the television is on. Socket schedules can also be set on a week-by-week basis, i.e, a socket can be configured to turn on only on, say, weekdays between 9 AM and 7 PM.

The cloud interface also allows notifications to be set up, wherein the unit automatically e-mails a pre-defined address when, say, a socket’s power consumption goes above a pre-defined level. 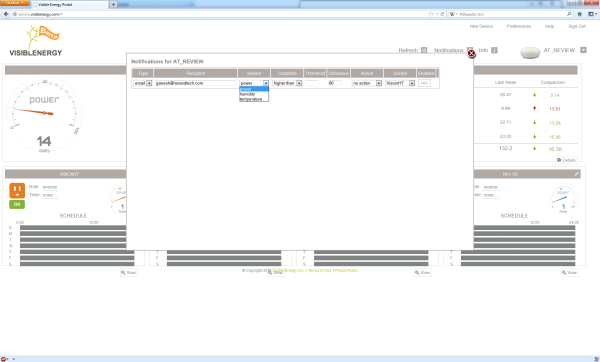 A variant of the Monostrip product which was announced recently allows for temperature and humidity sensors which can also be used for generating notifications. For the UFO Power Center, the power consumption of the socket is the only available parameter.

Detailed power consumption values are presented in a easy-to-use graph with a configurable time range. A CSV file with the power consumption data can also be exported, but the values recorded are at 5-minute intervals (even though the device updates the power data every second internally). 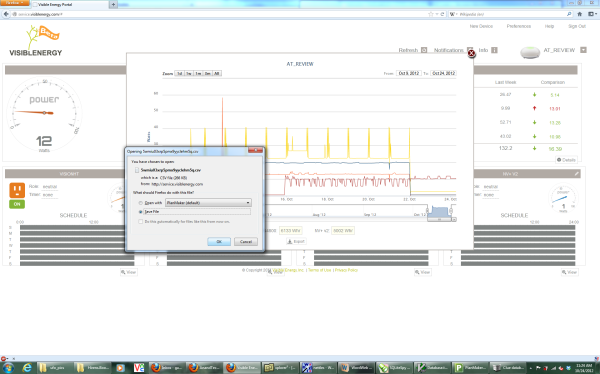 Similar graphs are available for the energy consumption / cost of operation.

The cloud interface is excellent for understanding the energy and power usage of the connected devices at a macro level. However, cloud management of the UFO Power Center is a hassle because each change has to be received by the unit from the server before the next change can be made. In addition, determination / recording of the instantaneous power consumption every second (the frequency at which the UFO Power Center’s internal registers are updated) is simply not possible. These drawbacks are almost fully solved solved by the iOS app, but we will look into another alternative, the open APIs, in the next section.