Taking Advantage of the Open APIs

Visible Energy more than makes up for the absence of an Android app by fully opening up access to the unit and gathered statistics over HTTP. The APIs are simple to use, with the data being presented in either HTML or JSON format. For example, to determine the current status of the sockets, one could just send a HTTP request to the UFO Power Center of the form: http://{IP}/{SOCKET}/status.[xml|js] ; A XML request returns data in the XML format, and a JS request in the JSON format. The exact format and fields can be found in the developer documentation.

The APIs can be used to create custom apps / scripts / programs which display or change the following information:

The purpose of this section is to not simply list out the various aspects accessible to developers through the open APIs. In the remainder of this section, I will discuss how the open APIs have been put to practical use by me and my colleagues at AnandTech.

As tech reviewers, power consumption of various devices is one aspect on which we spend a lot of time and effort. In the initial days, I used a Kill A Watt meter for this purpose. While it could deliver a rough idea of the power consumption, it wasn’t possible to record the values over a given time interval. In order to overcome this shortcoming, I shifted to using a Watts Up? Pro meter. By connecting it through USB to a PC and using the bundled software, it became possible to gather the instantaneous power consumption values over a particular time interval. Anand used to utilize the Extech True RMS Power Analyzer Datalogger for power measurement purposes. All the above devices provide power measurement with a 0.1 W resolution only. In addition, the Extech meter has a RS232 interface to the PC and the Watts Up? Pro has a USB interface, and both of them use custom software to track and download data from them.

Given the above aspects, all of us at AnandTech were looking for a power meter which could provide more accurate power measurement and also be easier to use / automate. One of my first tasks after putting the UFO Power Center through the paces was to use the provided power measurement APIs to solve this problem. I developed a custom Perl script to interact with the UFO Power Center (the script can actually interact with any Visible Energy device in the local network) and record the power consumed by a selected socket.

The power consumption recording is started and stopped by the user from within the program (this makes it useful to record the power consumed by a device, say, when it is running some particular sequence) and exported as a CSV file. After I developed this script, Anand went out and purchased a UFO Power Center of his own and started using the script for his reviews too. For example, all the power consumption graphs in the Vishera review were generated using Microsoft Excel and the CSV files exported by the Perl script. 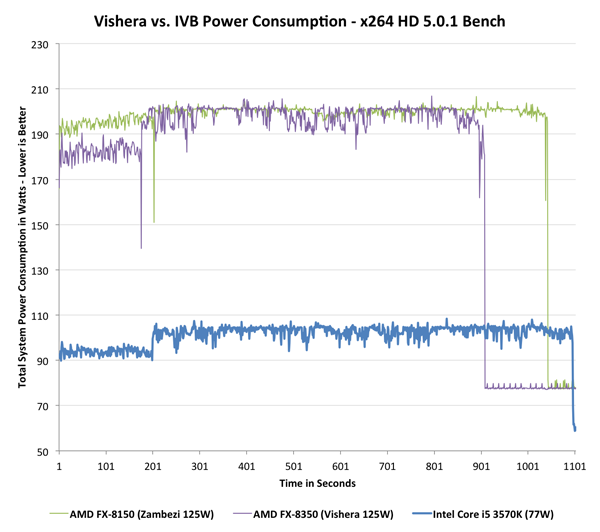 The power numbers reported by the UFO Power Center have a 0.01W resolution. In addition, it is possible to track the power consumed by all the four sockets simultaneously. In effect, the device can replace 4 Kill A Watts or 4 Watts Up? Pro meters and can be polled wirelessly for power measurement purposes. Similar to the script I created above, developers can utilize the provided APIs to come up with other interesting applications.