Before wrapping things up, we wanted to quickly take a look at the overclocking potential of the GTX 660. As the first GK106 product GTX 660 should give us some idea as to how capable GK106 is at overclocking, though like GK104 we’re eventually at the mercy of NVIDIA’s locked voltages and limited power target control.

In its rawest form, GTX 660 will have two things going against it for overclocking. First and foremost, as the highest clocked GK106 part it’s already starting out at a fairly high clockspeed – 980MHz for reference cards, and upwards of 1050MHz for factory overclocked cards – so there may not be a great deal of overclocking headroom left to exploit. Furthermore because NVIDIA is keeping the power consumption of the card low (it needs to stay under 150W max), the maximum power target is the lowest we’ve seen for any GTX 600 card yet: it’s a mere 110%. As a result even if we can hit a large GPU clock offset, there may not be enough power headroom available to let the GPU regularly reach those speeds.

Memory overclocking on the other hand looks much better. With the same memory controllers and the same spec’d RAM as on the other high-end GTX 600 cards, there’s no reason to believe that the GTX 660 shouldn’t be able to hit equally high memory clocks, which means 6.5GHz+ is a reasonable goal.

Throwing in our factory overclocked cards from our companion roundup, our core overclocking experience was remarkably consistent. The difference in the max boost clock between the slowest and fastest card was a mere 41MHz, with the Zotac card being a clear outlier compared to the rest of our cards. This comes as no great surprise since all of these launch cards are using the NVIDIA reference PCB, so there’s little room at this moment for overclocking innovation.

For the moment at least GTX 660 overclocking looks to be on a level playing field due to all partners using the same PCB. For overclockers the choice of a card will come down to pricing, what cooler they prefer, and any preference in vendor.

The end result of all of this is that at best we’re seeing 100MHz overclocks (going by the max boost clock), which represents roughly a 10% overclock. Coupling this with a good memory overclock and the 10% increase in the power target will result in around a 10% increase in performance, which isn’t shabby but also is the same kind of shallow overclocking potential that we’ve seen on cards like the GTX 670 and GTX 660 Ti. All told the GTX 660 isn’t a poor overclocker – 10% more performance for free is nothing to sneeze at – but it’s also not going to enamor itself with hardware overclockers who like to chase 20% or more.

Moving on to our performance charts, we’re going to once again start with power, temperature, and noise, before moving on to gaming performance. Due to popular demand we’ll also be including overclocking results with just a 110% power target so that you can see the impact of adjusting the power target separately from the clock offsets. 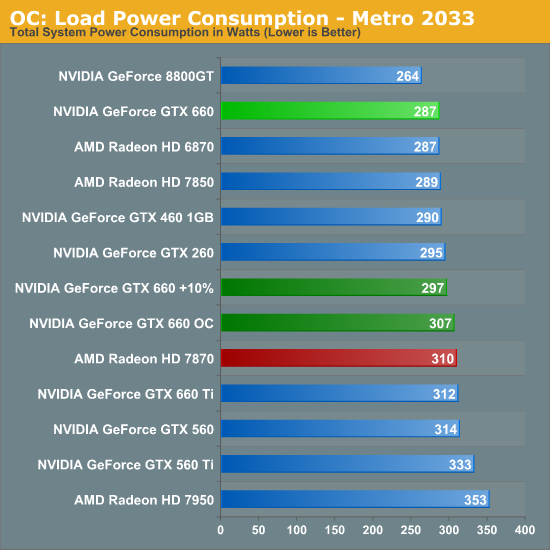 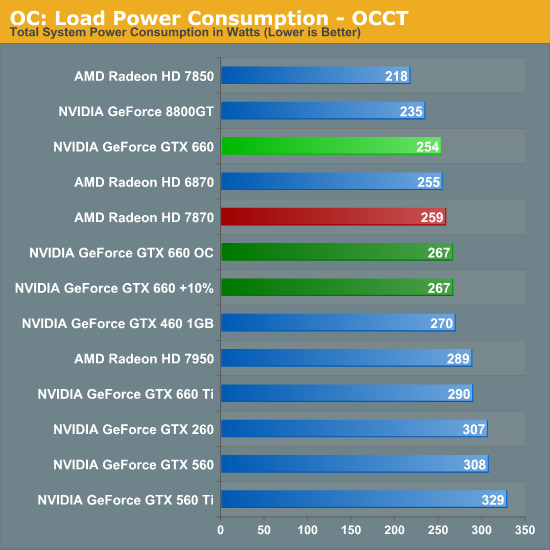 With a 110% power target we should be seeing an 11W-14W increase in power consumption, which is indeed roughly what we’re seeing at the wall after accounting for PSU inefficiencies. In Metro this is just enough of a difference to erase most of the GTX 660’s power consumption advantage over the GTX 660 Ti, though the GTX 660 still draws marginally less power than the stock 7870. Meanwhile under OCCT the GTX 660 now draws more power than the 7870, but still is still drawing over 20W less than the stock GTX 660 Ti. 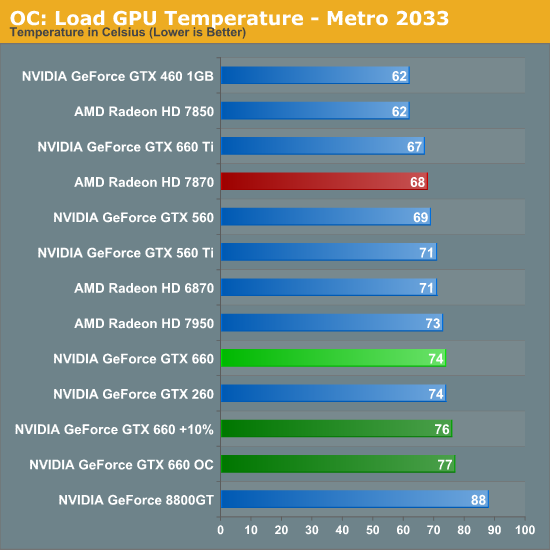 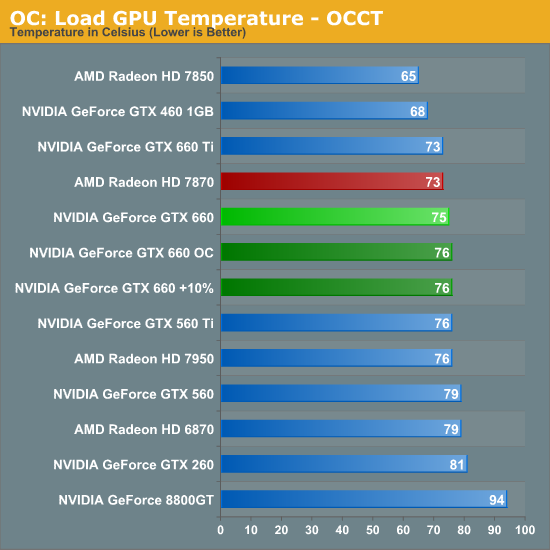 Our increased power consumption pushes temperatures up by another 2-3C. This is nothing a blower can’t handle, let alone an open-air cooler. 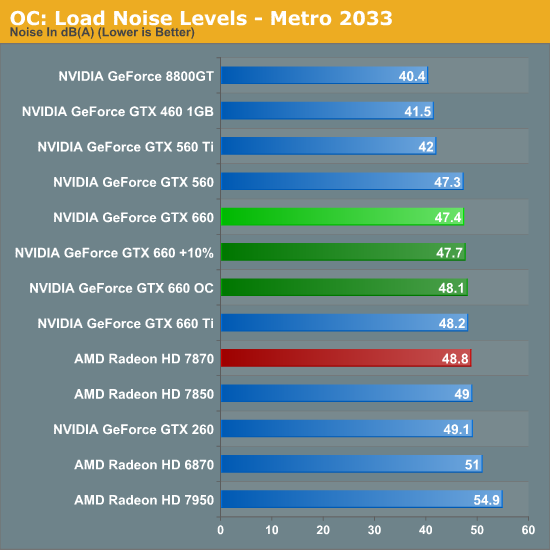 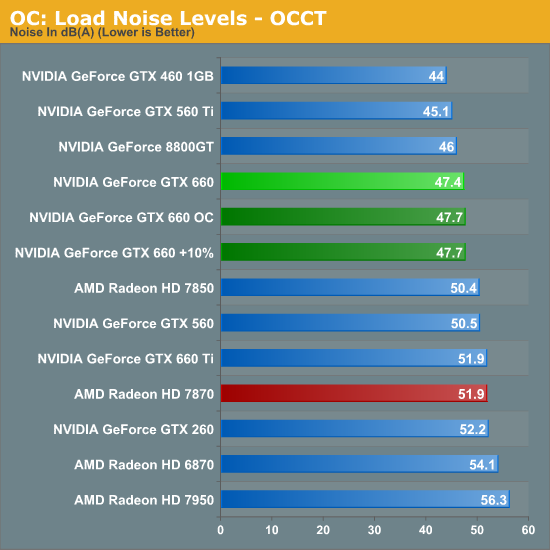 Interestingly enough, despite the increase in power consumption and temperatures, overclocking has almost no impact on noise. In the worst case scenario our GTX 660’s increased its fan speed by all of 2%, which increases noise by less than 1dB. As a result the amount of noise generated by the overclocked GTX 660 is practically identical to that generated by the stock GTX 660, and still below the reference 7870.