ECS P67H2-A Review: A visit back to Lucid's Hydra

For those who have never come across Lucid Hydra before, at release, it was heralded as the end of all other multi-GPU solutions.  Using this hardware and software interface, all DirectX and OpenGL calls would be intercepted and managed between the GPUs available on board, regardless of manufacturer, make, model, power, memory size, everything.  In reality, things were tougher than they seem.

I'm not going to speak about how Hydra works in detail - Ryan's tests and explanation have covered that in significant detail.  Today, I'm purely looking at how it performs in the market against some of the current retail titles, and how well the solution works.

ECS provide the Hydra software on the CD in the motherboard set, but unfortunately this is the 1.6.1 version, which predates October 2010.  The latest edition is available from the LucidLogix website, and currently rings in at version 1.7.105.  This version is still a few months old though, and it shows.  With the Hydra solution, you are limited to which drivers can be used - in terms of NVIDIA, the latest compatible drivers are 266.58, and with AMD it is the 11.3 ones you have to use.

The Hydra solution is limited in other ways as well.  The idea for this was that it would automatically intercept calls to the graphics cards and distribute the work accordingly.  In reality, the Hydra software needs to be told which programs to intercept, and the way it is performed is actually misleading.  The software itself will list 200+ games and benchmarks that Hydra will detect, but the Hydra system will actually only work with 43 according to the documentation.  These are, in alphabetical order:

This is rather disappointing.  Using the Hydra solution as an SLI certification bypass doesn't really work if there are only this many applications that the system supports.

Nevertheless, we've tested it on a few programs - Alien vs. Predator, Hawx, Far Cry 2, and a synthetic, 3D Mark Vantage.  I've put a synthetic in there for one reason - it should give an indication of the maximum performance a combined multi-GPU setup should give.  A synthetic doesn't really mimic real-world performance, as the algorithms used in them will try and use all the GPU capabilities all the time, but as an upper rung it might be worth taking a look.

For the tests, ECS provided us with a pair of their GTX 580 GPUs, which are the default factory versions with ECS stickers.  Using these in conjunction with a pair of HD 5850s allows the following GPU combinations:

Now for some results - first, 3DMark Vantage.  Here we take the GPU score of the benchmark: 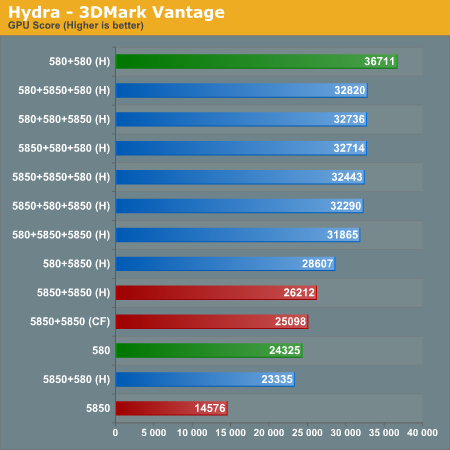 Quite a few issues come through here:

For DirectX11, we've taken the Aliens vs. Predator benchmark, and run through the GPU combinations: 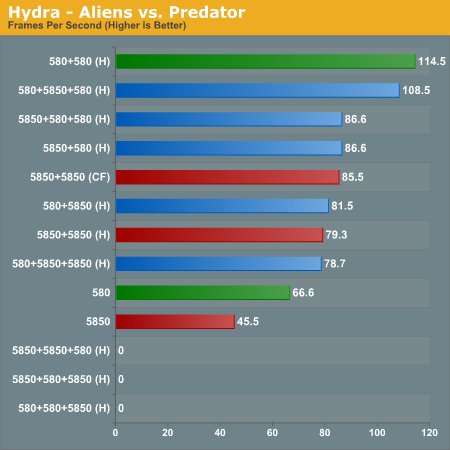 This time, other issues arise:

For a real world DirectX10 benchmark, we chose Hawx, the action/flight simulator.  Using the internal benchmark in DirectX 10.1 mode, with all the settings turned up to max at 1920x1080, the following results were achieved: 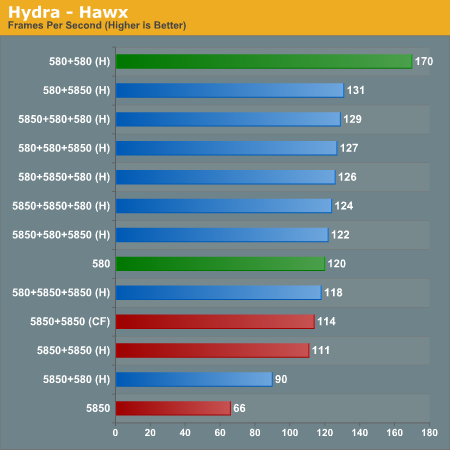 Unfortunately, there were quite a few issues running Hawx in many of the modes.  In all the three card modes, some long distance texture flickering was observed:

Our last test was FarCry 2, using the built-in GPU benchmark, looped 4 times and an average taken.  Unfortunately, despite being a supported application on the Hydra platform, results were very poor all around: 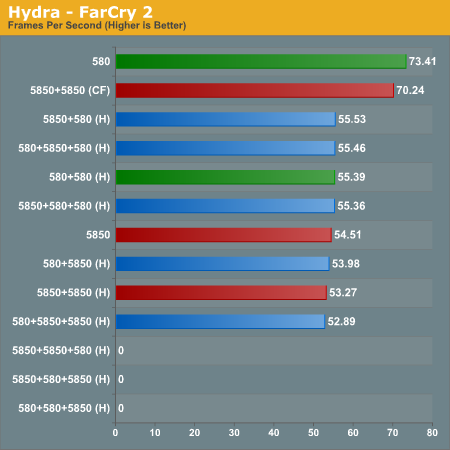 The issues found in Aliens vs. Predator with combination card setups running in AMD or NVIDIA mode surfaced here as well.  But even more astonishing is that every Hydra setup failed to give a boost in performance.  It seems that they have all defaulted to a 5850 - and even the dual 580 Hydra setup performed worse than a single 580.  The only card combinations worth working were the single card setups and the two 5850s in Crossfire.

The Hydra solution is still a long way from being viable and commonplace on motherboards.  It is a sneaky way around SLI certification, but only on a few products.  As it also supplies some extra PCIe lanes to run in x16/x16 or x16/x8/x8 mode, it makes me wonder if the price of the Hydra chip is cheaper than SLI certification and the NF200.  Nevertheless, the software needs both a driver update as well as a longer list of working titles.  However I fear that Lucid are more preoccupied with their Virtu technology on Z68, rather than Hydra.