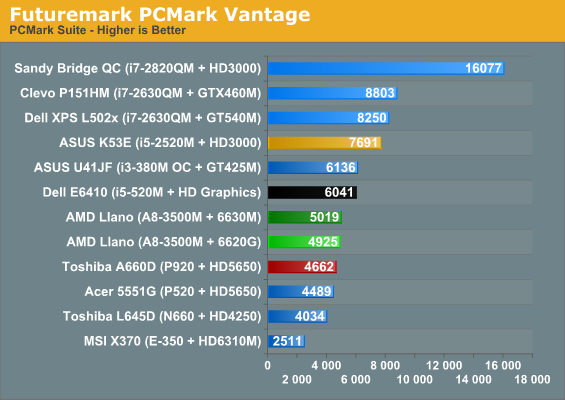 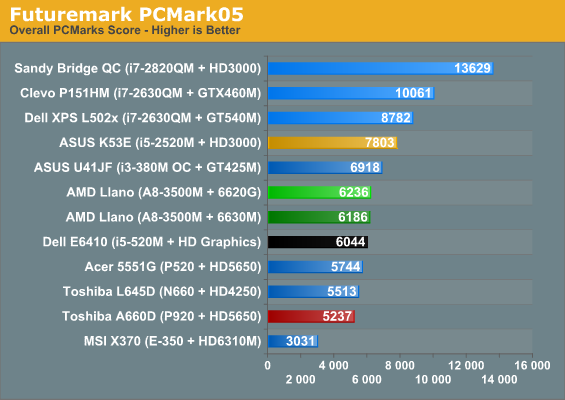 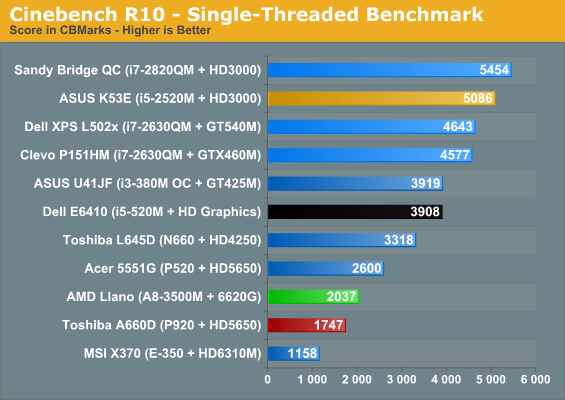 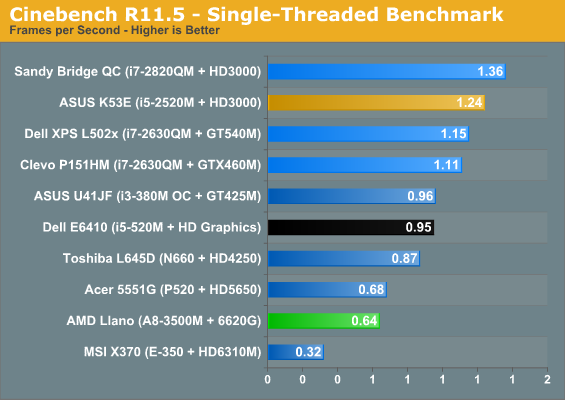 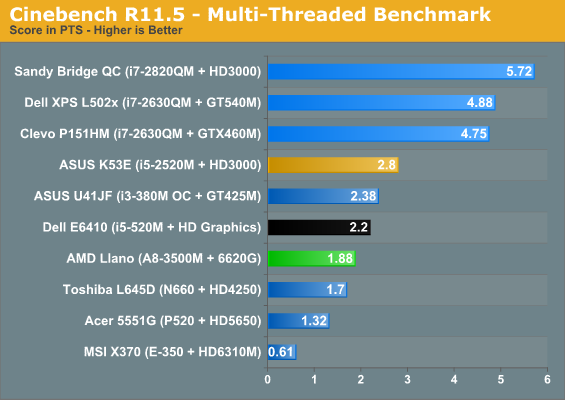 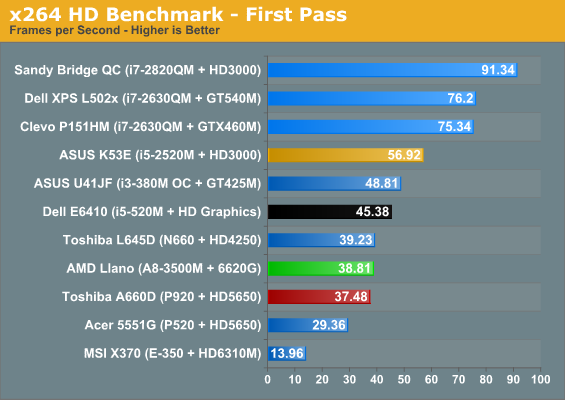 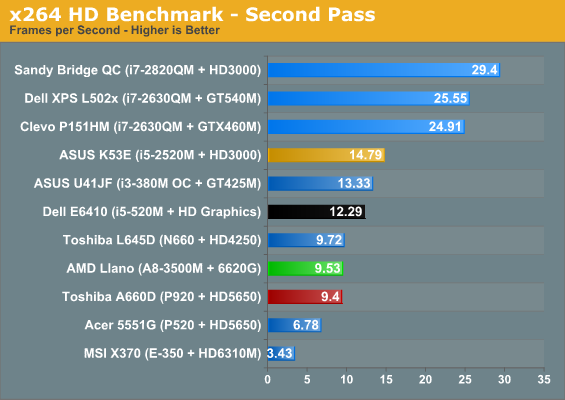 This time we have a more interesting competitor to look at: the Toshiba A660D. AMD says Turbo Core works at speeds of up to 2.4GHz on the A8-3500M, but we have no way of monitoring the actual CPU clocks right now. (CPU-Z if you’re wondering shows a constant 1.5GHz, but AMD says that utility doesn’t currently detect the proper clocks.) When we compare performance results between the Llano notebook and the A660D, we definitely see some differences in performance. Some of that may come from the added L2 cache and other architectural tweaks, but Cinebench R10 in particular shows a healthy 17% performance increase, even with a base clock that’s 7% lower. In the multi-threaded Cinebench result, the lead drops to 10%, which correlates well with how we’d expect Turbo Core to work. PCMark Vantage is still heavily influenced by the storage subsystem, and the storage score of 2950 on the A660D versus 3791 on the Llano suggests the Toshiba HDD is a significant bottleneck.

Looking at other laptops and tests where we’re looking purely at CPU performance, suddenly Llano starts to struggle. The Arrandale i5-520M offers 92% higher single-threaded performance in Cinebench R10 and 48% better single-threaded performance in R11.5; multi-threaded performance also goes to Arrandale, with a 23% lead in R10 and 17% lead in R11.5. x264 also gives Arrandale a decent lead, with i5-520M 17% faster in the first pass and 29% faster in the more intense second pass. The overclocked i3-380M in ASUS’ U41JF tells a similar tale—and both of these laptops are running processors from early last year. When we shift to Sandy Bridge, even without looking at the quad-core parts AMD’s CPU performance is tenuous. The i5-2520M is anywhere from 50 to 150 percent faster depending on which test we look at; even if we toss out the older Cinebench R10 single-threaded result of 150%, R11.5 given the 2520M a 94% lead. In general, then, a moderate dual-core Sandy Bridge i5-series processor looks to be at least 30% faster, so quad-core Llano really only competes with Core i3 and its lower, non-Turbo clocks.

None of the results here are particularly surprising; K10.5 even at 32nm is still largely the same performance. AMD has focused this round up upgrades more on reducing power consumption rather than increasing performance, and that’s a perfectly reasonable approach for a mobile CPU. Most of us probably aren’t doing 3D rendering, CAD/CAM, or unassisted video transcoding on our laptops anyway. It would still be great to see AMD offer up an equivalent to Intel’s Quick Sync; they have the better GPU architecture, but a dedicated decoder like Quick Sync can clearly pay dividends. Outside of that one deficit the reality is that Llano is still plenty fast. Slapping an SSD into Llano will make more of a difference than upgrading an HDD-based Llano laptop to Core i5, so if you’re looking for an inexpensive laptop that can do everything most users need, Llano is very appealing.