At CES 2011, two companies demonstrated working silicon based on the G.hn standard. While Lantiq introduced the XWAY HNX100 series, Sigma Designs introduced their CG5110 chipset. I didn't have a chance to meet with Lantiq, and so, Sigma's CG5110 demonstration was the first time that I could really see G.hn in action.

Though both Lantiq and Sigma claim that their chipsets can be used over all three wired media (coax / phone lines / powerline), only Sigma seems to be backward compliant with HomePNA and HomePlug AV devices on the same network.

Sigma's Reuven Franco was kind enough to demonstrate the CG5110 in action over coax and also over a power strip. As can be seen in the photo of the setup I captured at the suite, the development board was hooked up to the Ethernet traffic generator. The actual application layer throughput was being measured in real time and updated on the spreadsheet. 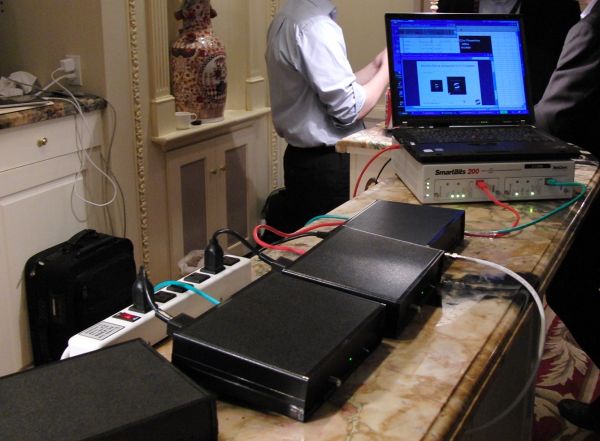 Admittedly, the setup (power strip with no noise source and a plain coax cable) was not representative of real world conditions in general. However, it did end up giving us confidence in G.hn. 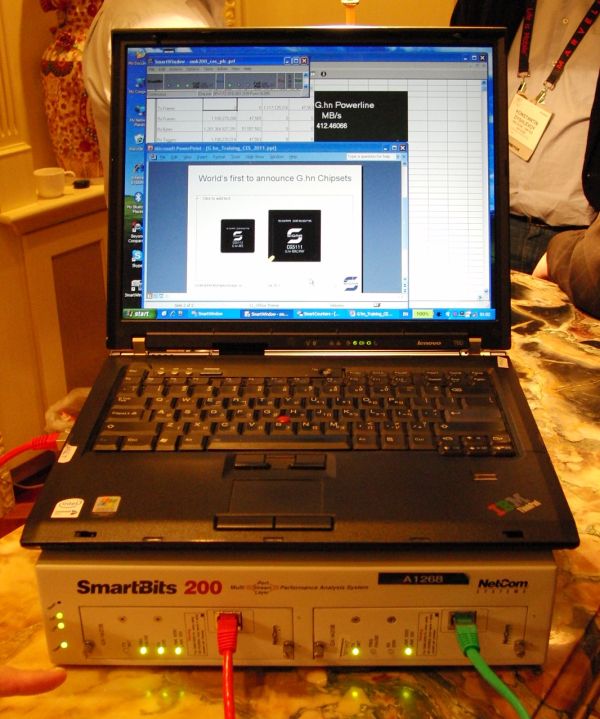 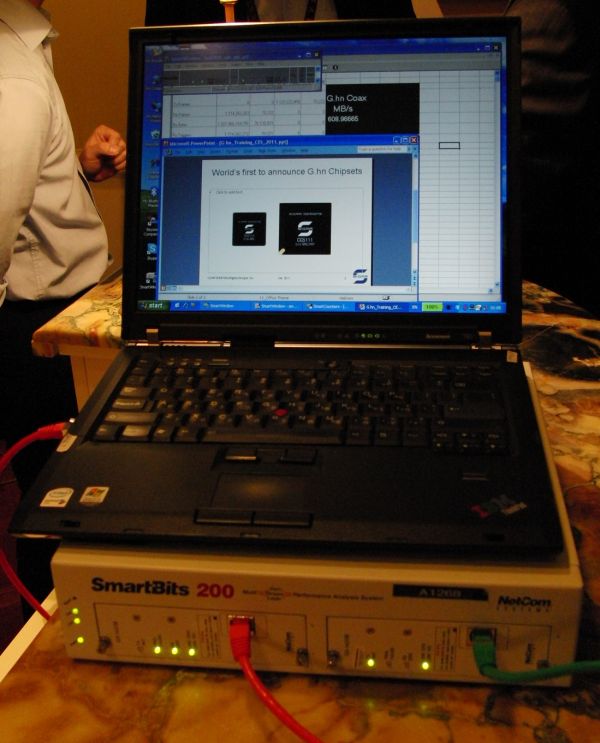 Sigma also indicated that ClearPath Extreme (the next generation version of the ClearPath technology they had demonstrated on the CG2110) wasn't yet enabled on the CG5110. They were quite confident that the test results being demonstrated (as shown above) would be experienced by consumers in real world situations also.

Working silicon is a good first step for the G.hn supporters. However, a multitude of challenges still needs to be overcome. In particular, we are not aware of the cost of backward compatibility with HPAV and HPNA (for the CG5110). Other G.hn silicon vendors seem to have completely eschewed backward compatibility. With the existing HomePlug install base, this is still an area of concern for G.hn. Also, the extent of interoperability of the CG5110 will only be known if Sigma Designs volunteers its silicon for interoperability tests / products get to the consumers. It is also not clear if the performance of the CG5110 is limited by the silicon and protocol overheads associated with interoperability.

There is always a cost overhead associated with integrating support for different media types on the same chip. So, it looks like HomePlug devices will continue to be cheaper for powerline-only communication. In the service provider market, the extra cost is probably a minor factor compared to the installation cost savings, but it will definitely be a factor in the price sensitive retail market. In addition, service providers also want software maturity (carrier-grade). It remains to be seen how long that will take for the G.hn vendors, but getting working silicon out of the door is a good start.

As Sigma Designs stole the powerline show at CES 2011, what was Atheros in the HomePlug camp upto? We undertook a visit to their booth to find out.