by Wesley Fink on July 10, 2007 2:00 AM EST
26 Comments | Add A Comment
26 Comments
One of the first coolers evaluated at AnandTech was a combination of air cooling and TEC (Thermal Electric Cooling) called the Vigor Monsoon II. The Monsoon did very well in overclocking, and is still the highest overclocking cooler we have tested, reaching 3.96GHz with the standard Core 2 Duo X6800 in our OC tests. While the Monsoon did very well in overclocking it did have a higher noise level than we care for, the result of the TEC switching on and off coupled to a fan that buzzed as it was turned on and off with the TEC. Since then we have reached 3.90 to 3.94GHz with several of the top air coolers, but we have not looked at more hybrid coolers - until today.

Several new "self-contained" water coolers have shown up over the past few months. Water cooling is another ambient cooling method, like air cooling. The water temperature cannot drop lower than the room temperature, where TEC and phase-change can actually chill below the ambient temperature. This is why they are referred to as sub-ambient cooling. Water cooling is normally considered superior to air cooling because water can normally hold low temperatures for a longer period of time than air. Water is a much better thermal conductor than air and it is theoretically a better cooling vehicle.

There are many high-end water cooling solutions with water-filled tubing that runs from CPU blocks to radiators for cooling and reservoirs for storage, and pumps for moving the liquid. The water systems are usually complicated, somewhat difficult to install, and plagued with the fact that water and electricity don't play well together, so a leak can destroy a computer system. This is where "self-contained" comes in. The water system is sealed, and the radiator, pump, fan, heatpipes, and fins are all together in a package about the size of a heatpipe tower. 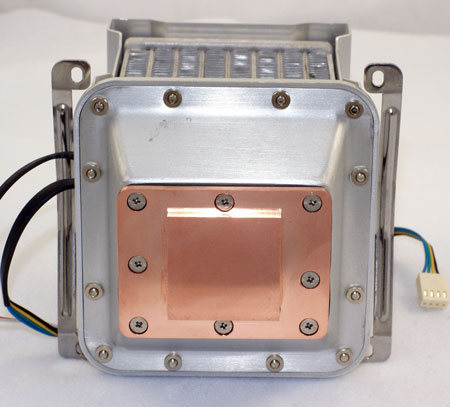 This is clearly illustrated in the Xigmatek AIO (All-In-One) which contains finned water-cooled heatpipes, an internal fan, and a pump and radiator in a package about the size of a heatpipe tower. 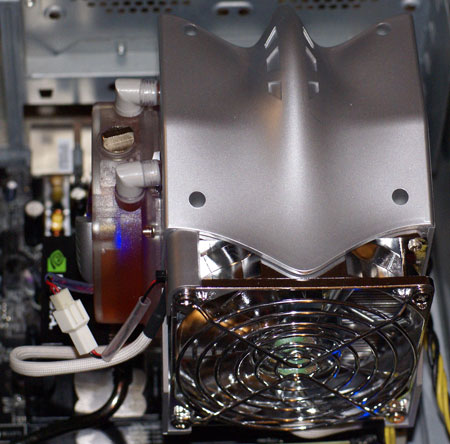 The Evercool Silver Knight, or WC-601, is based on a similar concept, but with an external water pump and fan, instead of the internal units as used on the Xigmatek. The Evercool is a bigger self-contained water system, but it still had no problem fitting our tight EVGA 680i motherboard.

Water cooling is also well known for the low noise levels exhibited by many of the better water cooling systems. Are these self-contained water systems as quiet as they claim to be? With these questions in mind let's take a closer look at these two all-in-one water coolers.