Evercool is a Top 5 Cooling Products manufacturer based in Taiwan. Manufacturing is at their facility in Guang Dong, China. The Evercool product line consists of air and water coolers for processors and video cards, fans, hard drive coolers, notebook chill pads, system cooling solutions, and peripheral cooling specialty items. The company was founded in 1992 in Taipei. Evercool opened the China manufacturing plant in 1997. Today Evercool employs 1200 at its Taipei R&D facility and its Guang Dong ISO9001 manufacturing plant.

The Silver Knight was first shown at CES this year and today it can be found for sale at many web etailers such as Newegg. The Silver Knight was originally introduced at a retail price of $59.95. A quick check of the web found it available $45 to $50 from several etailers. This is certainly competitive with the top-line air coolers. 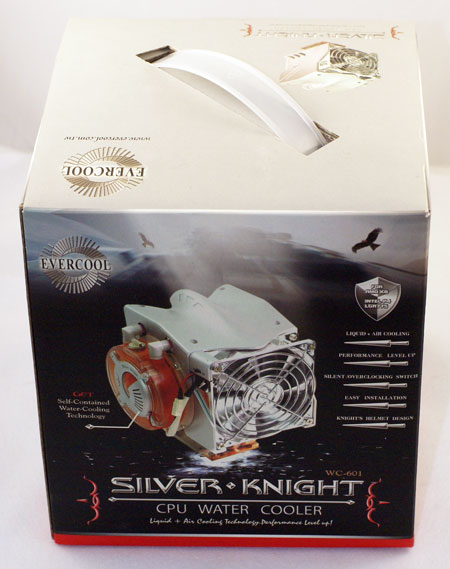 Inside the box is a ready-to-mount Silver Knight system, along with the mounting accessories for mounting on an Intel socket 775 or an AMD socket 754/939/940. We also tried the clip on several AM2 boards. The clip is a triple lug design that fits fine on recent flat side AM2 mounting cages. However some AM2 mounts have curved sides and these might require some modification to the clip for proper mounting. Evercool also includes a small syringe of thermal compound. Installation instructions are on the box and prominently displayed at the Evercool website. 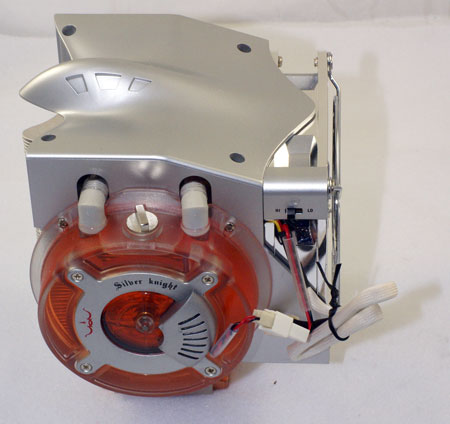 The Silver Knight cooler is rather strange looking. The knight's "helmet" top looks more like an alien space ship than a helmet to us. While the cooling core is 8mm copper pipes and aluminum cooling fins, much of the shroud, fan, pump, and cover are plastic. 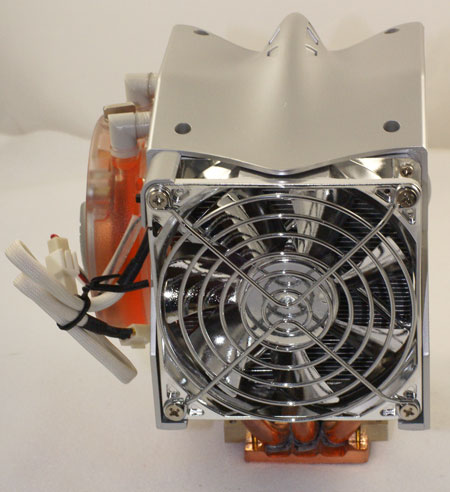 The standard size 92mm fan blows air through the cooler much like other heatpipe towers, and the 12-pole magnetic pump with a clear housing on the side circulates an antifreeze-like liquid through the 8mm copper pipes. Consider this a heatpipe tower with active circulation for the heatpipes. The clear plastic reservoir and motor on the side glow a soft blue during operation of the Silver Knight.

Mounting is simple and very secure with either 775 or AMD. However, you will have to remove the motherboard and mount the cooler to the motherboard before remounting the motherboard. The hex wrench included for tightening screws barely fits between the cooler top and the screws. It's a tight fit, but not impossible. We ended up hand-tightening the spring screws first and using the hex for the final tightening. The installation is solid and cannot be moved around. That is very good since the cooler weighs in at 960g, which is over 2 pounds. 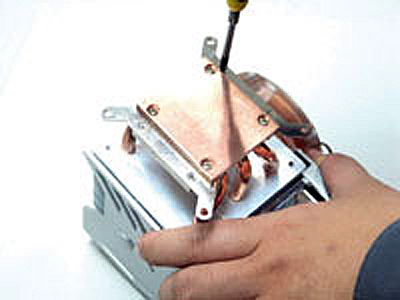 On AMD the Silver Knight is ready for attaching with an included AMD clip. On the 775 you must first screw on two plates to extend the footprint of the Evercool. 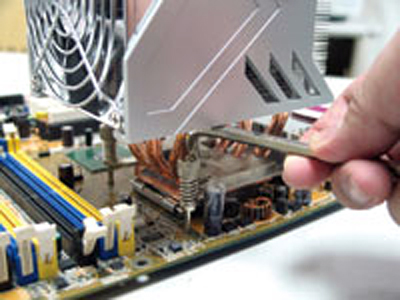 A bottom plate with long attached screws passes through the motherboard, the cooler is placed on the screws, and the cooler is held in place with spring-loaded screws. The completed install is very stable.

Our test system is Intel socket 775, but the Silver Knight will also mount on any recent AMD socket as well. While the manufacturer only specifies AMD socket 754/939/940 compatibility, we had no problem installing the cooler on socket AM2 with recent mounts that feature flat sides and a single connecting lug on each side. The Evercool kit includes the clip for mounting to existing AMD sockets, and the back plate, adapter plates, and spring-loaded screws for an Intel socket 775 install.


The Evercool appears to be a very large cooler, but the water pump and fan overhang at a higher level than many heatpipe towers. This makes mounting much easier than you might expect. The Silver Knight cleared all components on our test EVGA 680i. The EVGA 680i is a difficult to fit board due to the copper-finned heatsink and fan cooling the Northbridge. Installation was also an easy task on the ASUS Striker and ASUS Commando, and on the two new P35 ASUS boards - the P5K Deluxe and P5K3 Deluxe.