The more meaningful of the two benchmarks in terms of end users is going to be the particle simulation benchmark, as this has the potential to actually impact gameplay. The only problem is that the map is a contrived situation with four rooms each showing different particle system simulations. As proof that simulating particle systems can require a lot of CPU processing power, and that Valve can multithread the algorithms, the benchmark is meaningful. How it will actually impact future gaming performance is more difficult to determine. Also note that particle systems are only one aspect of game engine performance that can use more processing cores; artificial intelligence, physics, animation, and other tasks can benefit as well, and we look forward to the day when we have a full gaming benchmark that can simulate all of these areas rather than just particle systems. For now, here's a quick look at the particle system performance results. 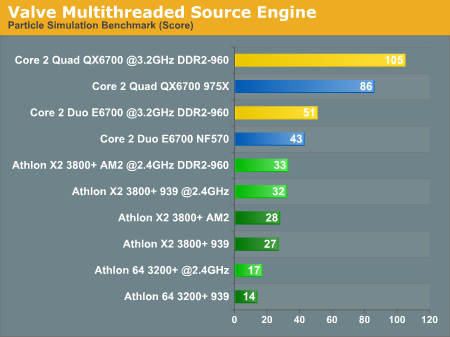 There are several interesting things we get from the particle simulation benchmark. First, it scales almost linearly with the number of processor cores, so the Core 2 Quad system ends up being twice as fast as the Core 2 Duo system when running at the same clock speed. We will take a look at how CPU cache and memory bandwidth affects performance in the future, but at present it's pretty clear that Core 2 once again holds a commanding performance lead over AMD's Athlon 64/X2 processors. As for Pentium D, we repeatedly got a program crash when trying to run it, even with several different graphics cards. There's no reason to assume it would be faster than Athlon X2, though, and we did get results with Pentium D on the other test.

Athlon X2 performed the same, more or less, whether running on 939 or AM2 - even with high-end DDR2-800 memory. Our E6700 test system generated inconsistent results when overclocked, likely due to limitations with the nForce 570 SLI chipset. For most of the platforms, the 20% overclock brought on average a 20% performance increase, showing again that we are essentially completely CPU limited. The lack of granularity makes the scores vary slightly from 20% but it's close enough for now. Finally, taking a look at Athlon 64 vs. X2 on socket 939, the second CPU core improves performance by ~90%

As more of a developer/content creation benchmark, the results of the VRAD benchmark are not likely to be as interesting to a lot of people. However, keep in mind that better performance in this area can lead to more productive employees, so hopefully that means better games sooner. (Or maybe it just means more stress for the content developers?) 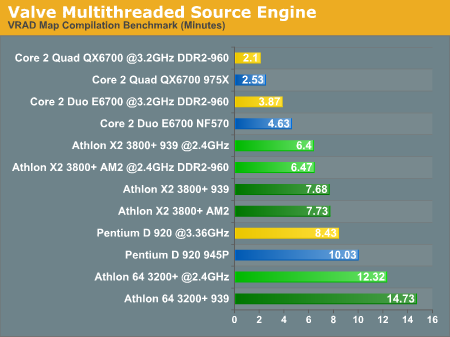 The results we got on the map compilation benchmark support Valve's own research and help to explain why they would be very interested in getting more Core 2 Quad systems into their offices. We don't have a single core Pentium 4 processor represented, but even a Pentium D 920 still ends up taking more than twice as long as a Core 2 Duo E6700 system, and about four times as long as Core 2 Quad. Looking at the CPU speed scaling, a 20% higher clock speed with the Pentium D resulted in 19% higher performance. If Intel had tried to stick with the NetBurst architecture, they would need dual core Pentium D processors running at more than 6.0 GHz in order to match the performance offered by the E6700. We won't even get into discussions about how much power such a CPU would require.

Performance scales almost linearly with clock speed once again, improving by 20% with the overclocking. Moving from single to dual core Athlon chips improves performance by about 92%. Going from a Core 2 Duo to a Core 2 Quad on the other hand improves performance by "only" 84%. It is not too surprising to find that moving to four cores doesn't show scaling equal to that of the single to dual move, but an 84% increase is still very good, roughly equal to what we see in 3D rendering applications.