AMD & ATI: The Acquisition from all Points of View

Our Thoughts: The GPU Side

The AMD/ATI acquisition doesn’t make a whole lot of sense on the discrete graphics side if you view the evolution of PC graphics as something that will continue to keep the CPU and the GPU separate.  If you look at things from another angle, one that isn’t too far fetched we might add, the acquisition is extremely important.

Some game developers have been predicting for quite some time that CPUs and GPUs were on this crash course and would eventually be merged into a single device.  The idea is that GPUs strive, with each generation, to become more general purpose and more programmable; in essence, with each GPU generation ATI and NVIDIA take one more step to being CPU manufacturers.  Obviously the GPU is still geared towards running 3D games rather than Microsoft Word, but the idea is that at some point, the GPU will become general purpose enough that it may start encroaching into the territory of the CPU makers or better yet, it may become general purpose enough that AMD and Intel want to make their own.

It’s tough to say if and when this convergence between the CPU and GPU would happen, but if it did and you were in ATI’s position, you’d probably want to be allied with a CPU maker in order to have some hope of staying alive.  The 3D revolution killed off basically all giants in the graphics industry and spawned new ones, two of which we’re talking about today.  What ATI is hoping to gain from this acquisition is protection from being killed off if the CPU and GPU do go through a merger of sorts. 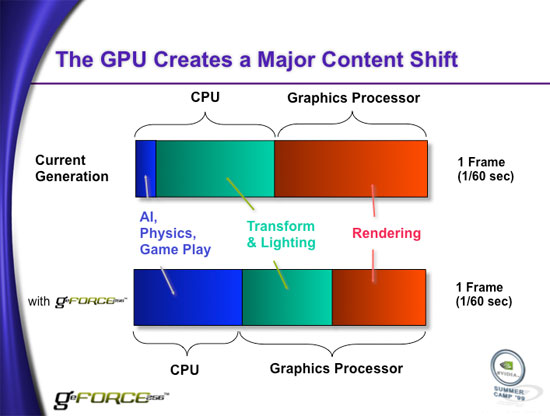 The NVIDIA GeForce 256 was NVIDIA's first "GPU", offloading T&L from the CPU. Who knows what the term GPU will mean in 5 years, will it be a fully contained within today's CPUs?

ATI and NVIDIA both seem to believe that within the next 2 - 3 years, Intel will release its own GPU and in a greater sense than their current mediocre integrated graphics.  Since Intel technically has the largest share of the graphics market thanks to their integrated graphics, it wouldn’t be too difficult for them to take a large chunk of the rest of the market -- assuming Intel can produce a good GPU.  Furthermore, if GPUs do become general purpose enough that Intel will actually be able to leverage much of its expertise in designing general purpose processors, then the possibility of Intel producing a good GPU isn’t too far fetched.

If you talk to Intel, it's business as usual.  GPU design isn’t really a top priority and on the surface everything appears to be the same.  However, a lot can happen in two years -- two years ago NetBurst was still the design of the future from Intel.  Only time will tell if the doomsday scenario that the GPU makers are talking about will come true.