AMD & ATI: The Acquisition from all Points of View

It has now been over a week since AMD dropped the bombshell that it would be seeking to acquire ATI in a massive $5.4 billion dollar deal to be closed sometime in Q4 of this year.  Regardless of each company's current position in the market, the AMD/ATI merger has the potential to completely re-write the face of competition and a number of markets we cover on a regular basis.  It's a tremendous gamble on AMD's part, especially considering that much of the deal is in borrowed cash.  Whether this deal ends up being the smartest move AMD ever made or the beginning of the end has yet to be seen, and honestly at this point it's far too early to predict what will come out of it should the acquisition go through.

While predicting isn't our forte to begin with, what we can do is present you all sides of the story.  We'll take you through the perspectives of AMD and ATI as well as NVIDIA and Intel, and conclude with a bit of our own analysis on the entire situation.  We'll start off with a bit of background information on the acquisition: 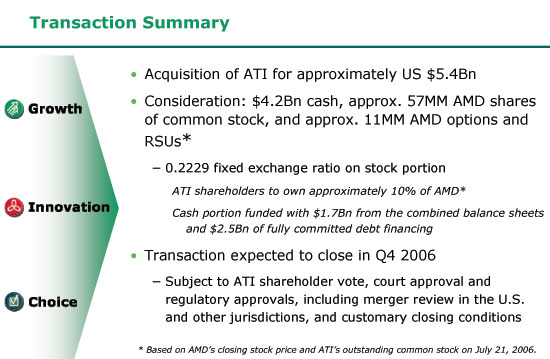 With the backdrop set, let's kick things off by looking at the merger from AMD's perspective.