Battery life of the OnePlus 8 Pro was a big question-mark for a lot of users given the phone’s 120Hz refresh rate. Several weeks ago I had reported on my initial power draw investigation results covering the different display modes of the screen:

Much like on the Galaxy S20 series, the OnePlus 8 Pro incurs a large static power draw penalty when switching from 60Hz to 120Hz. This is a increase in the baseline power of the phone, no matter the type of content that you’re displaying, and will even incur on a pure black screen. 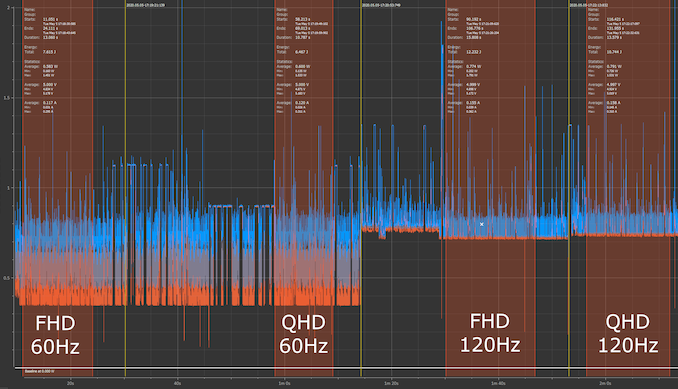 Whilst OnePlus does include refresh rate switching mechanisms based on scenarios such as video playback, the lack of a true variable refresh rate (VRR) mechanism that works on the per-frame basis and is implemented on the deeper OS and GPU driver levels, means that current generation high-refresh rate devices will have to suffer from a larger than usual power and battery life penalty. 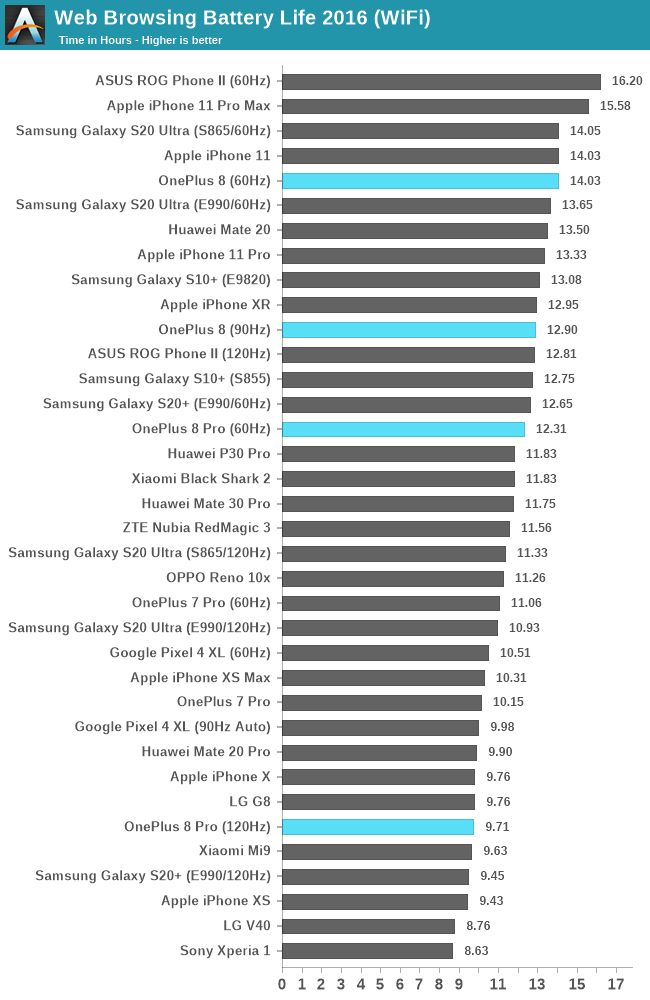 In our web browsing test, we see the clear impact of the 120Hz refresh rate on the OnePlus 8 Pro as it reduces the battery life of the phone in the test by 22% compared to its regular 60Hz mode. As a note- we’re testing at QHD resolution here as generally there’s very little power benefit from using lower resolutions.

In terms of absolute results, the 9.71h of the 120Hz mode here are adequate but not great. The results fall in line with the S20+ at 120Hz, but short of the bigger battery capacity of the S20 Ultra. At 60Hz, the 8 Pro moves back in at 12.31h which is a great result and will get you through even the most extensive usage days.

Whilst many will have looked forward to the OnePlus 8 Pro results, the really interesting results belong to the smaller OnePlus 8. The phone here was able to showcase outstanding battery life figures. The 90Hz mode only has an 8% impact on the battery runtime in this test, and in the 60Hz mode the phone lasted for a staggering 14h which is amongst the best results we’ve ever measured on a phone. 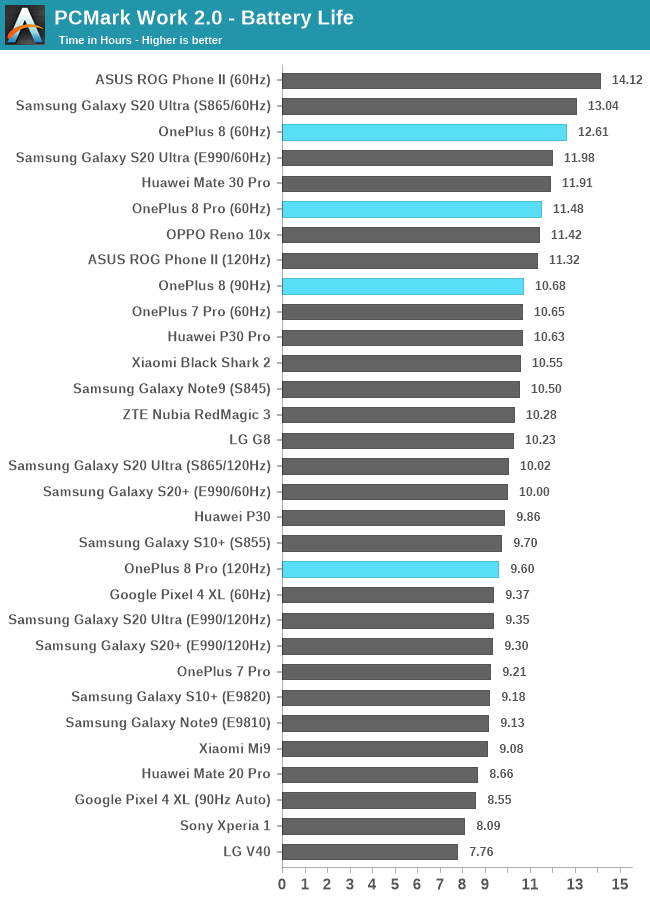 In PCMark, the smaller OnePlus 8 again takes the lead in terms of longevity with its 60Hz mode. The 8 Pro also does quite well at 60Hz, and both phones lose respectively 15.4% and 16.4% of their runtime when switching over to 90Hz and 120Hz modes.

Whilst the OnePlus 8 Pro pretty much fell in line with what we’ve expected in terms of its battery life, falling in line with the 120Hz power behaviour of the S20 phones, it’s the regular OnePlus 8 which surprised a lot given that it features a slightly smaller battery, notably surpassing the efficiency of the OnePlus 8 Pro. Given its form-factor and weight, it’s easily the longest-lasting device of its class, with only other heavier, bigger battery phones being comparable in terms of battery longevity.