For both systems, we installed Windows: Windows 10 Pro on the small 8-core Dhyana system, and Windows 10 Enterprise on the big dual 32-core Dhyana Plus server. With AVX/AVX2 not working properly, our range of testing was limited. As mentioned previously, some software didn’t even want to run on one system or the other, such as CPU-Z on the server. 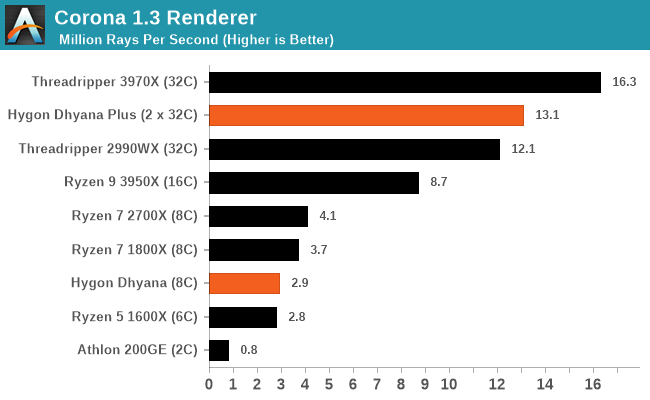 From the numbers we can see that our 8-core Dhyana processor falls somewhere between the 6-core Ryzen 5 1600X and the 8-core Ryzen 6 1800X, due to clock speeds, but on particular tests it gets hammered by even the Athlon 200GE. The dual 32-core Dhyana Plus server seems to be in all sorts of a mess, often beaten by the Ryzen 7 1800X, or can now be easily beaten by the Ryzen 9 3950X. The one benchmark where it did really well was Corona – a memory/NUMA agnostic integer based renderer – it seems like a match made in heaven.