The big overriding question is about what exactly has changed with these processors compared to the standard Ryzen and EPYC CPUs. To say that they are rebadged processors, as some have suspected, is completely incorrect – we can tell this alone by the different cryptography engines provided by the Linux kernel updates. But we also detected other differences.

For the cryptography changes, these are detailed in the Linux kernel updates.  The updates revolve around AMD’s secure encryption for virtualization features, or SEV. Normally with an EPYC processor, SEV is governed by the cryptography protocols defined by AMD, in this case RSA, ECDSA, ECDH, SHA, and AES. In order to generate the right keys, SEV uses these methods. However, in the Hygon Dhyana designs, SEV is built to use algorithms known as SM2, SM3, and SM4.

As stated in the updates, SM2 is based on elliptic curve cryptography, and requires additional private/public key exchange. SM3 is a hashing algorithm, similar to SHA-256, and SM4 is a block cipher algorithm, similar to AES-128. Additional commands are placed into the Linux kernel in order to support the extra functions these algorithms need. In the notes it states that these algorithms were successfully tested on Hygon Dhyana Plus (presumably the big CPU) processors but they were also successfully tested on AMD’s EPYC CPUs.

Slowing Down Some Instructions

The biggest update to the design we were able to determine is in the instruction throughput. We don’t think that this difference between Dhyana Plus and EPYC has been mentioned before, and we did extra checks to make sure our software was displaying the right data, but put simply some instructions have been purposefully made slower. This has some rather serious implications, especially depending on when it occurred in the pipeline.

What we think is the case is that in order for AMD to export its SoC design, it had to also share microcode relating to how the CPU interprets instructions, and it was told to slow down certain key instructions (or disable them altogether) in order to make the arrangement with the joint venture and China work.

In our testing, we found that while integer performance is similar between Hygon and EPYC, certain floating point instructions, namely DIV and SQRT, are not pipelined in the Hygon CPU. This means throughput and latency is reduced. A lot of simple MMX/SSE instructions have reduced throughput:

Perhaps the biggest change however was one that even differed between the server ‘Dhyana Plus’ processor and the consumer ‘Dhyana’ version. Random number generation, which is a key backbone in a lot of stochastic and financial processes, is severely reduced on the Dhyana Plus. The key instructions, RDRAND and RDSEED, have various reasons for being slow/fast. Here’s the comparison:

That’s quite a difference, especially in RDSEED. We saw that RDSEED, the seed generation to help spawn random number algorithms, is over 10x slower on the server chip, and RDRAND, used for actually generating hardware based random numbers, is faster than standard Ryzen – moreso on the server chip. Interestingly enough, the same delays for RDSEED for the server chips are also seen on Ryzen Mobile and Ryzen Desktop APUs.

For RDRAND, having a faster random number generator can be indicative of two things: either it is actually faster, or the random algorithm has a lower periodicity, i.e. the point at which an algorithm wraps on itself. The best pseudo-RNG have the largest periodicity, so in this case the RDRAND is fast leads us to conclude that the periodicity is low, leading to lower quality random numbers.

For RDSEED, the fact that this is 10x slower is a little different. RDSEED is meant to take information from the various sensors on board and output a random value to initialize the RDRAND – it should only get called once per periodicity. A slower RDSEED either means its taking data from more sources (a good thing), or it’s being slowed down on purpose (a bad thing).

In actual fact, RDRAND and RDSEED can be enabled/disabled in the BIOS of our Dhyana Plus system. 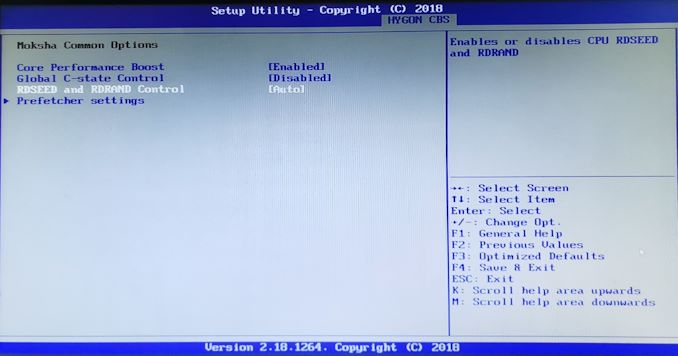 It’s amusing that this menu is called ‘Moksha Common Options’. Moksha being a word commonly associated with ‘enlightenment’ or ‘release’. This is either a clever word play, or someone digging out a non-contextual old Chinese to English dictionary in translation.

For things like AES, we have a direct benchmark for these, and the fact that these CPUs do not support AES means that we get a tanking in performance:

It should also be noted that the typical methods for finding the power consumption on AMD CPUs by probing registers also failed here. These seem to be removed from the CPU altogether.