Every processor made in the US has to be of a certain performance level in order to be deemed suitable for export. Companies have pages and pages of documents relating to the performance of their hardware as determined by the metrics that govern the laws in the USA. These metrics include raw processing power, measured in gigaflops (GFLOPs), adjusted peak performance (APP), and/or the composite theoretical performance (CTP). Depending on which territory you export to, one or more of these metrics may apply.

One way around this, if you cannot import the CPU, is to have a license to build it. But more than that, if you can adjust the license and have a custom input into the design, you can relabel the hardware as a homespun device and be somewhat within the realms of plausibility. This is how one of AMD’s core designs, with modifications, has made it into a ‘Chinese’ x86 CPU for the Chinese market. The big plus on the packaging isn’t so much that it avoids import issues, but the ‘中国’ label that comes attached. Then again, one assumes that the people using these CPUs don’t exactly have a choice in what they can buy.

We discovered that these processors have been changed from the Zen 1 design in a number of ways. To say they are carbon copies of the Zen 1 SoCs, which is what a lot of people have suspected, is not true – enough has changed in the design to say that these parts are rebalanced, mostly for worse performance than their Zen 1 counterparts. The integer performance is essentially identical, however the floating point performance has been reduced – common instructions having half the throughput, and random number generation has been adjusted to be both slow and produce lower quality random numbers. The cryptography engines have also been replaced, such that common AES instructions are no longer accelerated but others more specific to the Chinese security, such as SM2, SM3, and SM4, are now included. In our testing, despite the processors showing AVX/AVX2 support when probed, it appeared to be disabled. We suspect this to be more of a firmware bug than a limitation of the Hygon CPU. 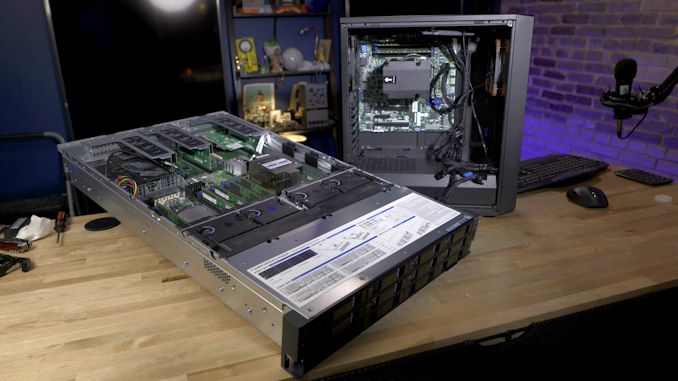 The method by which AMD was able to get an edited version of its first generation Zen core design into a ‘Chinese’ designed x86 CPU is highly convoluted. By first creating a joint venture with other Chinese companies called THATIC, then by forming two companies called HMC and Hygon each owned in different amounts between AMD and THATIC, how each business was able to discuss and control parts of the IP was sculpted in order to keep the secret sauce still in AMD’s hands, but allow the Chinese side of the ventures to request modifications. Those requests have to then be approved, and then HMC commissions the chips from GlobalFoundries, while Hygon packages them and sells them to companies like Sugon. We go into detail on this in our overview back on the first page, but suffice to say trying to follow where all the pieces are is almost like playing a game of Risk blindfolded.

With AMD unwilling to discuss on the record any of the finer details of the arrangement or changes to the processors, when asked if they could disclose how the processors were changed, we were told ‘if you find anything out, we may confirm it’. The one time I was able to see a Hygon Dhyana processor was due to a miscommunication with one of the Hygon vendors at Computex, and the person who let me take pictures suddenly stopped communicating with me after the event (I presume to keep his job). It still took over a year from those discussions to get hold of the chips for testing, and only then we were able to obtain the chips due to the current US Entity List ban covering one of the joint venture companies. This essentially killed the project dead, and caused one of the US subsidiaries to be mothballed, allowing some parts to leak onto the market where they had once been meticulously controlled. 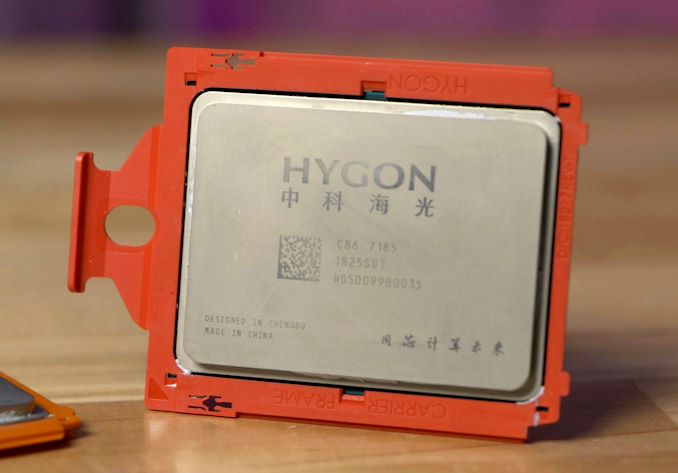 Overall these Hygon CPUs offered China an alternative to the Intel market, and arguably something faster than they might have been able to purchase through import restrictions. AMD made some money at a time it badly needed it, but with the success of its Zen 2 platform, I don’t foresee AMD needing to do something similar over the next decade. The nature of the agreement between AMD, its joint venture THATIC, and the joint companies, was only for a single core design, Zen 1, and not Zen 2, limiting its competitiveness. Moreover, the US Entity List ban on one of the joint venture companies, for all intents and purposes, has made the project dead. The Chinese Hygon Dhyana x86 processors will still be in use by governments and other such organizations for a number of years to come, but this is bound to end up one of the oddest annals of the history of semiconductors.