Most of the stock coolers were tested with a maximum load of 150W, lest we start a fire. These products were not meant to handle thermal loads way higher than the stock specifications of the CPUs they were being shipped with. 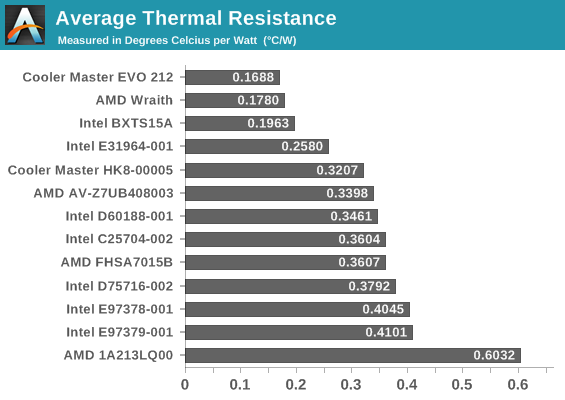 Looking immediately at the average thermal resistance and we see three main coolers out in front, and it is no surprise that these three are the beefiest - the EVO 212, the Wraith and the BXTS15A. The small Kabini cooler is designed for very low power, and our small test here pushes it outside of its window. 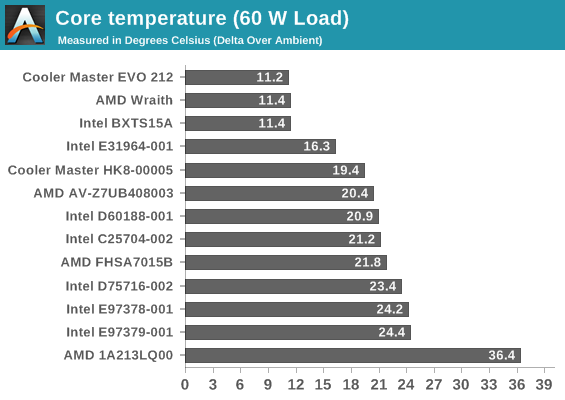 As we move up the thermal loads, from 60W all the way up, the coolers by and large stay in their positions, with small differences becoming more pronounced as the load increases. 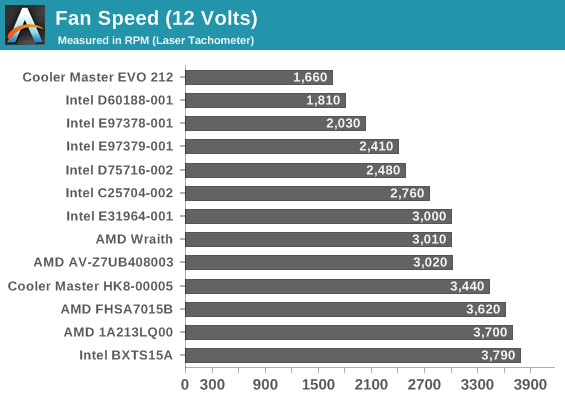 The EVO's large 120mm fan keeps the RPM down here, and it is interesting to see the RPM and noise of the BXTS15-A go far and above the other coolers. 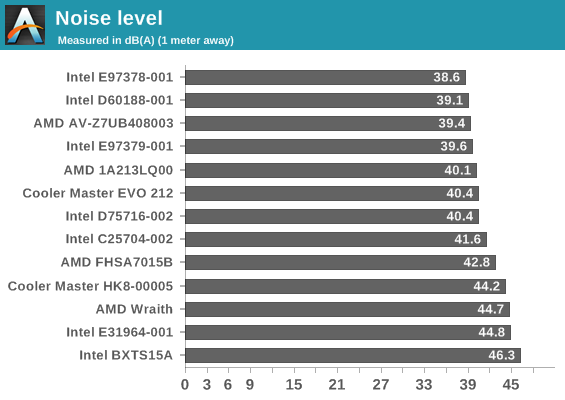 An interesting observation would be that Intel’s coolers meant for a specific socket have about the same absolute thermal resistance regardless of the core’s material. Taking socket 775 coolers as an example, the aluminum D75716-002 performs similarly with the copper C25704-002, most likely due to its solid core, and the tall copper D60188-001 also performs similarly due to the much slower (and quieter) fan. The same goes for the aluminum E97379-001 and the copper E97378-001 socket 1155 coolers, the former of which simply has a significantly more powerful fan attached. The E31964-001 performs significantly better but its high performance is not just due to its size and copper fins, as the fan is quite fast and loud as well.

In AMD’s camp, the simple and cheap FHSA7015B displays reasonable thermal performance at the expense of comfort, as the maximum speed of its fan is quite high. The more advanced AV-Z7UB408003 offers only slightly better thermal performance but noise levels were significantly lower. The Cooler Master HK8-00005 beats both of the aforementioned coolers in terms of thermal performance but its noise levels are rather high. This was to be expected, as it is based on the core design of the AV-Z7UB408003 but is significantly smaller, therefore a more powerful fan would have to make up for the loss of mass. Finally, the small 1A213LQ00 realistically has by far the worst overall performance of every cooler we tested here today, as the little cooler is designed with AMD’s power efficient AM1 CPUs in mind and cannot be directly compared to any of the other coolers in this review.

Both of AMD’s Wraith and Intel’s aftermarket BXTS15A stand out, pulling ahead in terms of performance the rest of the stock coolers. AMD’s Wraith is but a breath away from Cooler Master’s EVO 212 and the BXTS15A does not fall far behind. There is a catch though and that is the fans. Both the Wraith and the BXTS15A are making use of very strong fans, with a much higher top speed than that of the 120 mm fan that the EVO 212 is using. Strong fans are not just inherently louder themselves but the high air turbulence they create effectively multiplies the sound pressure level of the setup.