Video recording quality was one of the weaknesses of previous Huawei phones. The Shenzhen manufacturer only introduces OIS last year with the P8 and in devices before that we saw poor ISP performance as videos generally lacked detail. In terms of video encoding we see usage the Kirin 950’s encoder block IPs by Imagination Technologies.

Note: We have yet to confirm if video recording is affected by the camera focus issue and thus can’t differentiate between lack of detail caused by either the optical system or the ISP’s processing.

At 1080p the Mate 8 is able to offer better detail than past devices such as the Mate S. We actually see the video bitrate more than doubled as by default 1080p30 is now recorded at 23.7Mbps instead of the 10Mbps of past Huawei devices. This really helps overall image clarity.

The Mate 8’s new 3-axis OIS does a better job at keeping a still image, however Huawei hasn’t managed to get rid of the abrupt module repositioning and we thus still see jagged motions. Unfortunately Huawei still has a lot of work to do to catch up to OIS systems of other manufacturers such as from LG or Samsung.

The camera application offers the option to enable EIS in the settings (“Stabilizer” option). I’m a bit disappointed here to see that the new ISP still struggles to maintain proper quality as it’s very visible that the resulting video is just a cropped and re-scaled frame out of a native 1080p stream from the camera sensor. This results in large loss of detail and my repeated recommendation to just not use this feature.

I was surprised to find 1080p60 among one of the recording modes as HiSilicon had briefed me telling that the encode capabilities of the Kirin 950 hadn’t evolved, but seemingly this is wrong as 60fps recording is very well present and working. I was surprised by the video’s bitrate as Huawei set a rather high 47MBps encode configuration for the mode. This results in a noticeable improvement in detail which is welcomed. It also seems that OIS is functioning at a higher sampling rate as we see much less jagged “travel” as it looks as if we’re dealing with increased finer movements of the module.

Selecting 1080p30 disables the option to use a “Beauty” mode which is popular with some users, and again 1080p60 disables the option to use EIS. This points out that HiSilicon’s video ISP architecture is DSP based and has limited resources available to it as it needs to disable features as video throughput increases. This might also have been one of the reasons why the vendor chose not to employ 4K media encoders as it might have still been bottlenecked by the ISP.

Sound recording continues to be very clear for the Mate 8 although for some reason the default volume was much too low making it very hard to listen to recorded videos both on desktop as well as the phone itself. One can hear that in the first ~1s of the video the audio is louder after which it seems some sort of too high dynamic range compression is applied. This actually represents a large usability issue that I hope gets resolved in future software updates.

My unit of the Mate 8 came with a SanDisk SDW32G eMMC chipset. This is an eMMC 5.0 part running in HS400 data rate mode, meaning at frequency of 200MHz DDR at with a bus width of 8 bit enabling a maximum throughput of 400MB/s. The controller used is one of the 3 Synopsis DesignWare blocks on the Kirin 950, with the second controller being used for the SD card with help of an Arasan PHY IP, and the third one connecting the WiFi combo chipset.

We’ve noticed that Android 6.0 has broken our usual test setup of AndroBench 3.6 as the random I/O tests aren’t able to properly report their scores. As such while we’re looking for better alternatives (Other than AndroBench 4.0) I’m keeping it simple and just reporting the sequential read and write speeds for 3.6. 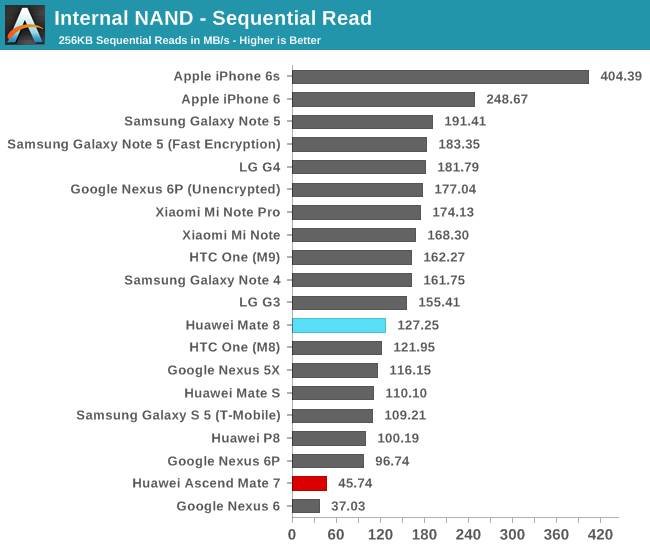 The Mate 8 managed 127MB/s sequential read which puts it at the lower end of last generation flagships. Unless I’m mistaken the phone comes unencrypted and Huawei also doesn’t offer the option to encrypt the phone as it’s missing from the settings menus. HiSilicon has confirmed to me that the Mate 8 has FDE enabled by default and that the performance listed represents the encrypted performance of the phone. 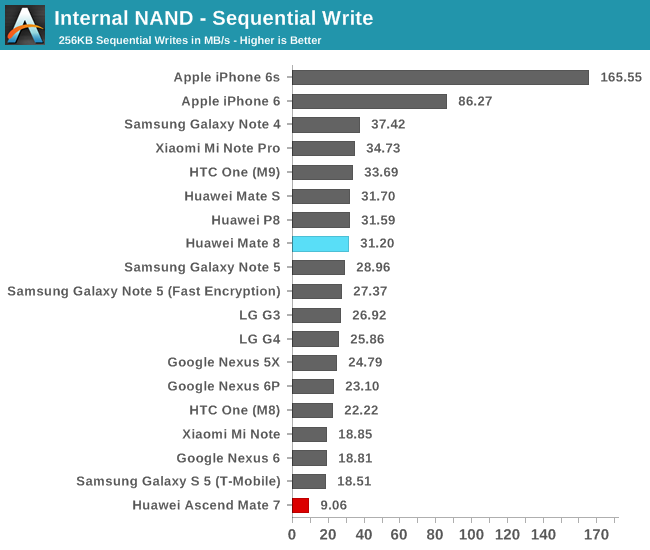 Write speeds come in at 31.2 MB/s which is relatively good in comparison to other devices. Here we see the huge improvement over last year’s Mate 7 as it notoriously suffered from horrible NAND speeds as it used a eMMC dated back to 2012.

WiFi connectivity and performance was sort of an absolute disaster for Huawei over the last year as every device we’ve reviewed sported horrible WiFi speeds or outright did not even support the 5GHz band.

The Mate 8 finally improves the situation as we see the old Broadcom BCM4334 dropped in favour of a new BCM43455. We actually covered this piece last MWC as it was introduced by Broadcom. Being a 1x1 HT80 solution capable of 802.11ac on both 2.4 and 5GHz bands we should see speeds of up to 433Mbps. As mentioned earlier in the NAND section, the WiFi chipset is connected via SDIO so it’s likely that the Mate 8 isn’t as power efficient as PCIe implementations and may be one of the factors of why maximum battery life isn’t quite as high as I expected it to be. 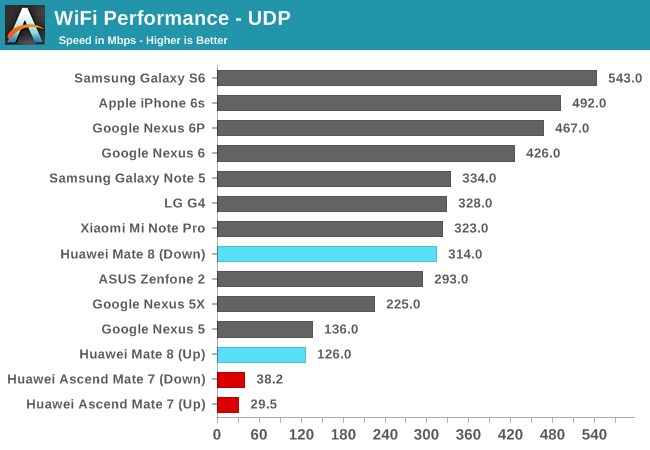 On the downstream direction we’re indeed seeing speeds somewhat in line with the theoretical maximum as the Mate 8 reaches 314Mbps. What continues to baffle me though is that we’re again seeing a large discrepancy between downstream and upstream as I was only able to reach 126Mbps upload on the device. It seems Huawei again is using some kind of limiter or traffic shaper on this device. Again I’m not too sure why they’re doing this and if it has anything to do with power efficiency but it’s definitely an odd characteristic exclusive to Huawei.

On 2.4GHz the Mate 8 reaches 78.6Mbps downstream and 67Mbps upstream, also displaying >2x improvements over past devices. While we don’t yet have objective testing for WiFi reception, I also noticed connectivity range on the Mate 8 greatly improved over the Mate 7.