Continuing on with our standard system and CPU benchmarks we analyse how the Mate 8 performs in more real-world scenarios.

One large disadvantage of the Mate 7 was the fact that device shipped with Android 4.4 KitKat while Android 5.0 had already been around the corner. Unfortunately Huawei’s update schedule allowed the international variant of the Mate 7 to receive an official update to Android 5.1.1 update only a mere two weeks ago, well over a year after the initial release of the device. Because the update introduces a lot of performance improvements related to the switch to the Android RunTime instead of the older Dalvik JIT compiler, I re-benchmarked the Mate 7 to be able to get an up to date comparison between the two devices.

Furthermore we observed a large JavaScript performance improvement with the latest Chrome stable version 47. Among smaller performance improvements among all devices we saw large boosts to new Cortex A57 SoCs such as found in last year’s Samsung flagships or devices coming with the Snapdragon 808/810. Therefore I went ahead to make sure the current device selection shown in this review have updated scores as we continue to re-benchmark legacy devices. 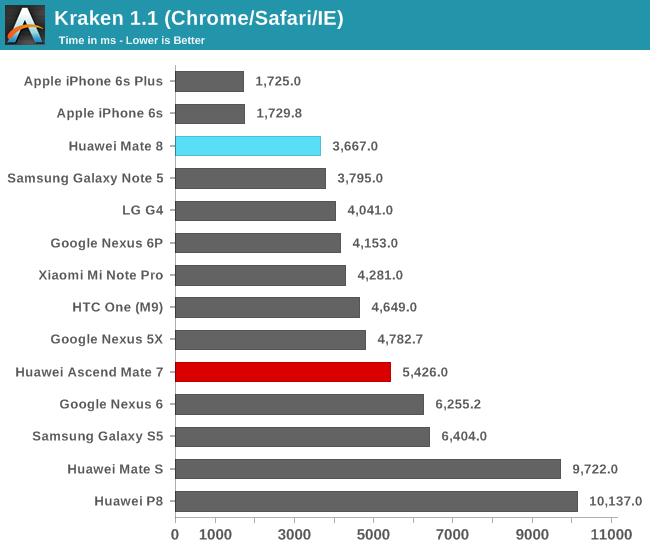 In Kraken the Mate 8 gets the best performance among Android devices with a score of 3667ms. Even though this is a good number, the advantage to the Note 5’s Exynos 7420 is rather small and we still see a large delta to Apple’s latest iPhones. Apple still sees a massive platform advantage due to a much better optimized JavaScript engine in the form of Nitro, as Chrome’s V8 has fallen behind in performance over the last few years, a difference further amplified by the superior single-thread performance of Apples’ CPUs. 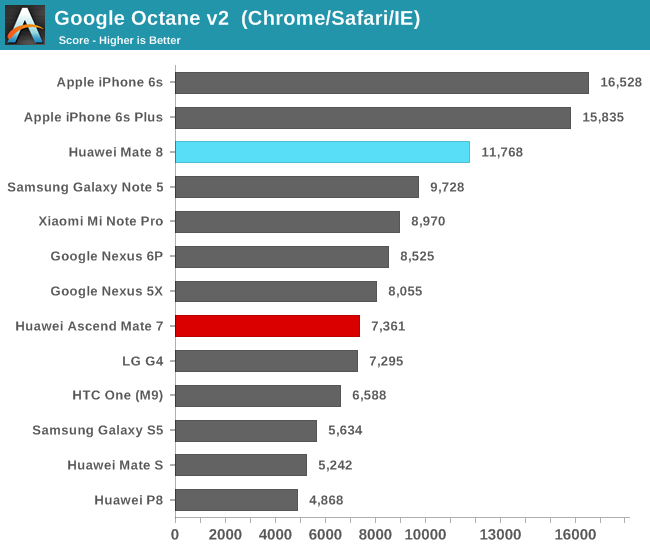 On Octane the Mate 8 is able to better distance itself in Chrome as it shows a more significant performance advantage to Exynos 7420 and Snapdragon 810-based devices, enabling it to lead Android devices. 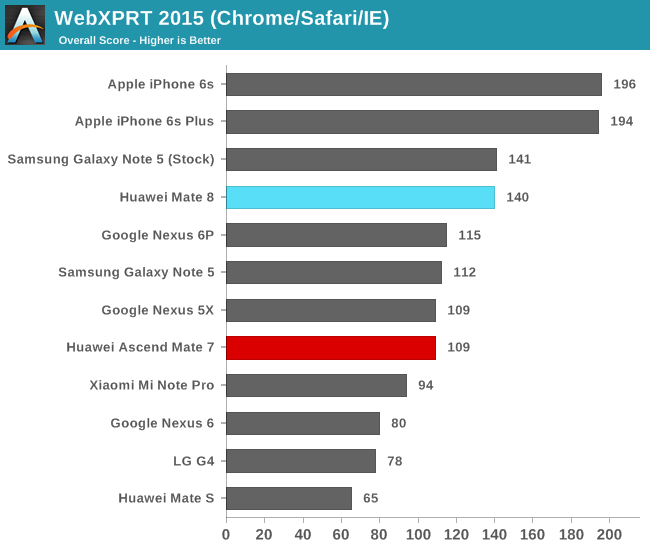 WebXPRT shows a similar large advantage as the Mate 8 is leading Android devices in Chrome. Here again we see the difference an optimized browser can make as Samsung’s SBrowser still is able to slightly lead the Mate 8 even though it has a weaker CPU. It would really be interesting to one day see a full apples-to-apples browser comparison between all hardware platforms out there but unfortunately that’s seems to still be a hard-to-fulfill wish.

We continue on with BaseMark’s BaseMark OS II 2.0 – a system benchmark that tests out different aspects of a device’s performance, starting with a more synthetic system benchmark. 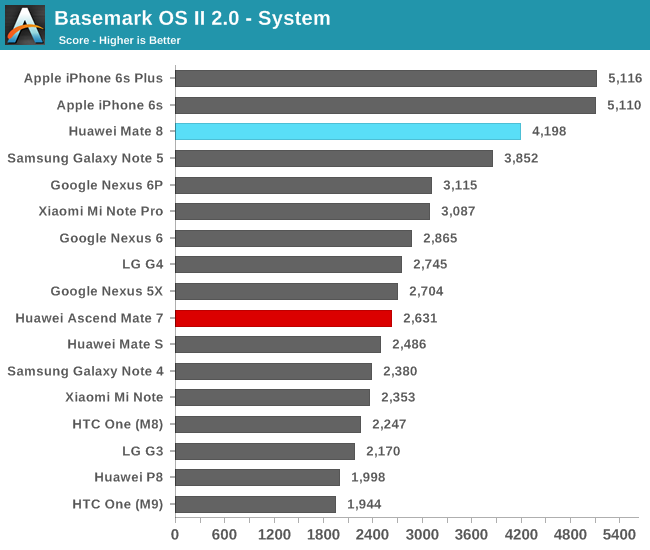 The Mate 8 continues to post impressive results as the fastest Android device to date. The delta between the Kirin 950 and the Exynos 7420 seems rather small here so it might be that we’re seeing the effects of a lot of various properties between the two platforms. 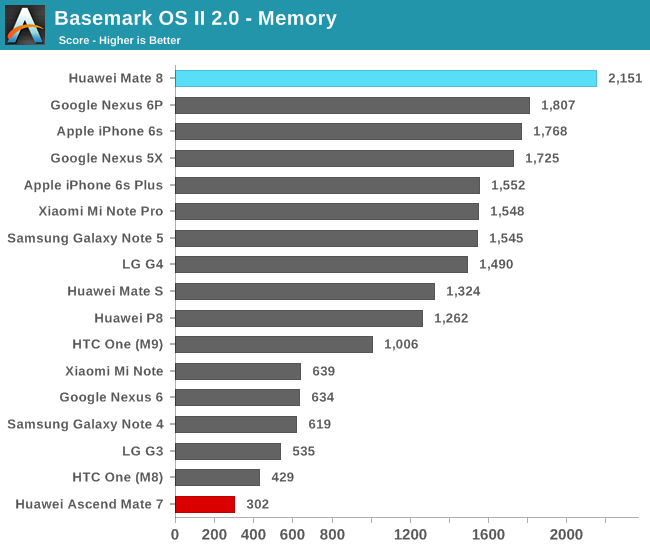 On the memory sub-test the Mate 8 is able to post a very large boost compared to any other device. It’s interesting to see that the devices leading the benchmark are all running Android 6.0 so we might be seeing an OS-side improvement in filesystem API performance. The difference between the Mate 8 and Mate 7 is simply enormous as the Mate 7 had one of the worst-performing NANDs in recent memory, to see Huawei able to go from the worst to the best performer in this test is very encouraging. 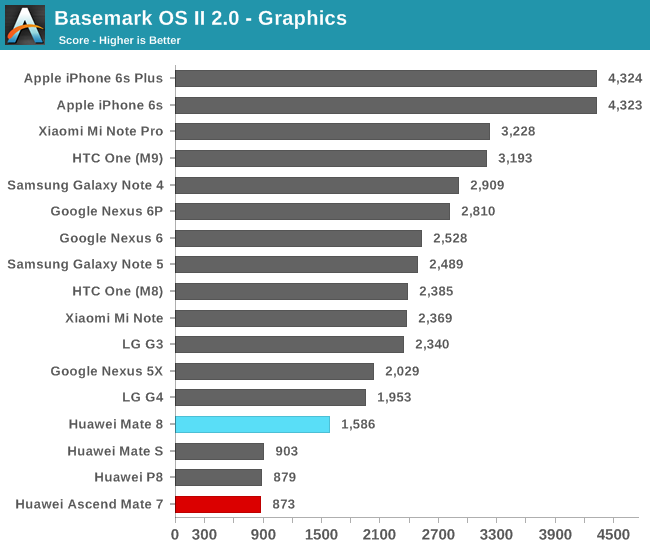 The graphics sub-test of BaseMark OS II has historically been unkind to Mali-based GPUs and the Mate 8 is no exception as we see the Mate 8 perform quite badly compared to other current-generation devices. Nevertheless, the new GPU is able to show a large improvement over the past-generation Kirin devices. 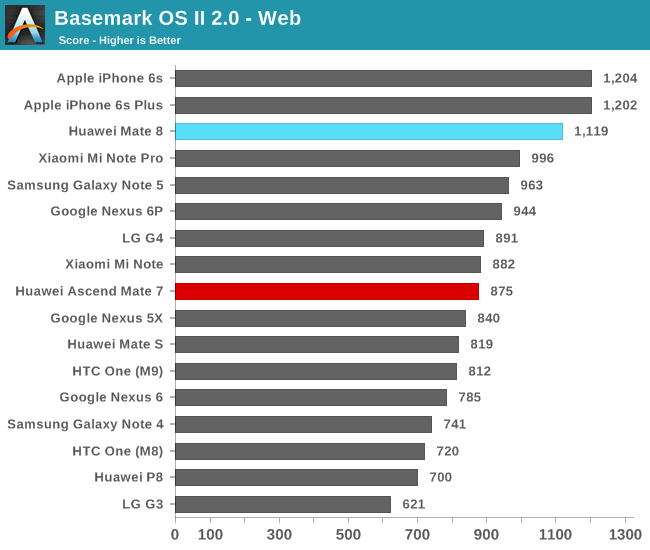 In BaseMark’s web test we see the Mate 8 again perform very well. The Huawei flagship is actually close to the performance of Apple’s new iPhones in this test. 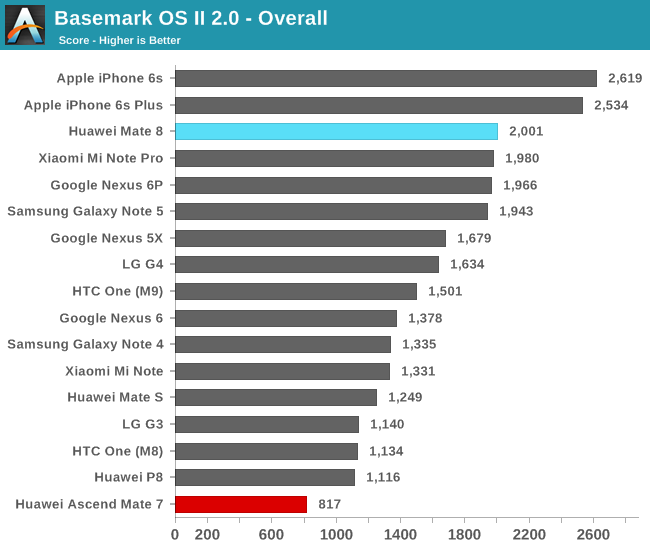 Overall the Mate 8 is able to post the best Android BaseMark score – it’s especially the improvement over last year’s Mate 7 which is drastic.

We continue on with Futuremark’s PCMark – another system benchmark that is able to test everyday scenarios and overall device performance by using stock OS APIs. 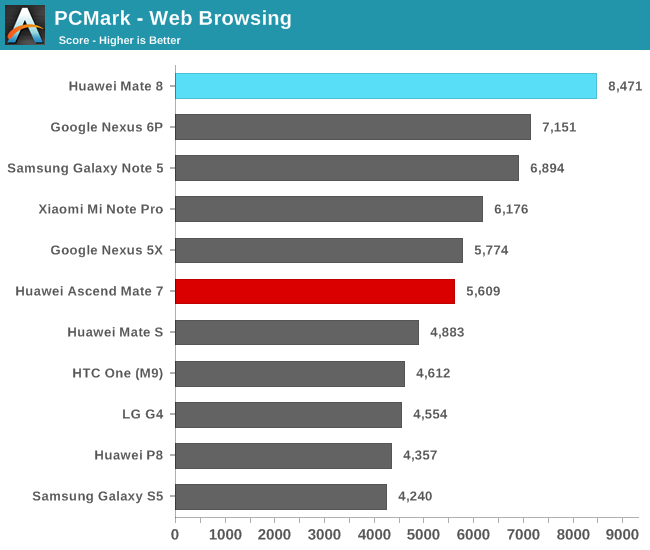 In the web-browsing test the Mate 8 is able to post a significant lead over other devices, scoring almost 8500 points. The firmware upgrade of the Mate 7 also allowed it to catch up to current-generation devices and is now able to better distance itself from Krait Snapdragon devices as software and compilers matured were better able to take advantage of ARM’s A15/57/72 big core architectures and thus age better. 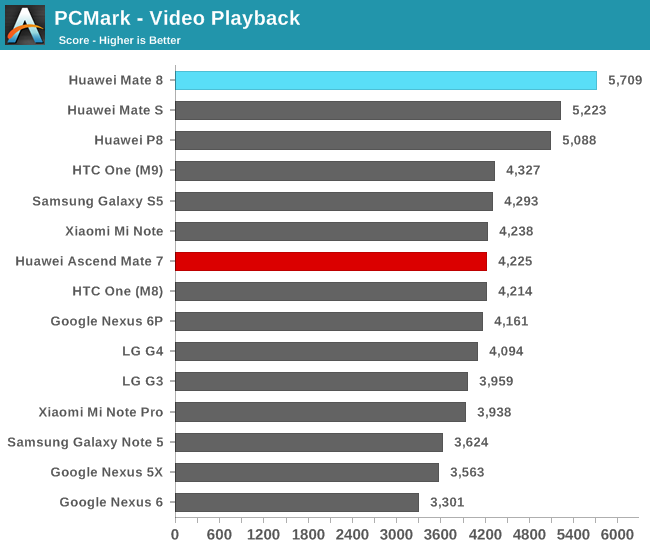 The Mate 8 continues to sport very good video performance. Kirin SoCs use encoder and decoder IPs supplied by Imagination Technologies, Huawei’s devices were seemingly the only ones not affected by a performance degradation in this benchmark that we first saw introduced in Android 5.0. 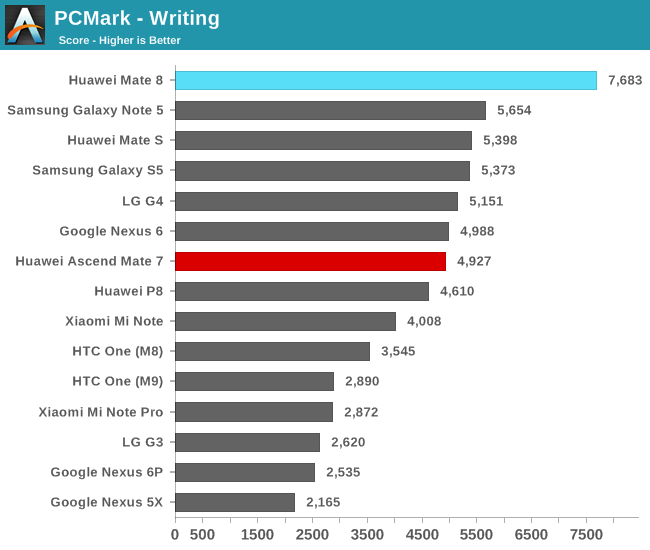 The writing sub-test is where the Mate 8 is able to showcase the single large performance advantage over the competition. The test consists of small latency-dependent performance spikes that test out both raw performance of Android’s Java runtime as well as the SoC’s DVFS and scheduler policies. The Mate 8 being able to score so high seems to be due to Huawei’s optimisations of Android as well as higher average operating performance points enabled by the Kirin 950. Oddly enough this also confirms that the large performance degradation that we saw happening on the Nexus 5X/6P were not caused by Android 6.0 itself but rather by some configuration that Google chose to do on the new phones. 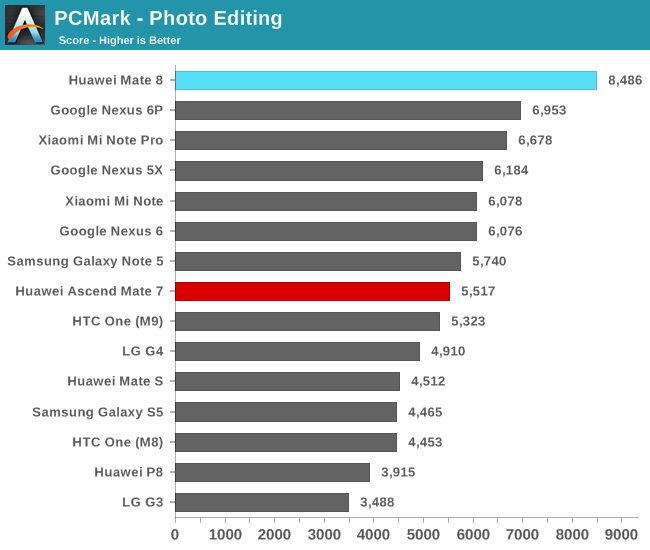 The photo editing test is mainly a GPU-based benchmark runs compute workloads through Android’s stock media effect libraries which rely on RenderScript. The Mate 8 able to score this well even though it doesn’t have the most performant GPU configuration means that either HiSilicon or ARM have greatly improved compute performance for Mali GPUs. The Mate 8 comes with ARM’s r8p0 version of the Mali drivers which is the latest available release. It would be interesting if with future software updates we’ll be able to see similar improvements from other vendors such as on Samsung’s Exynos devices. 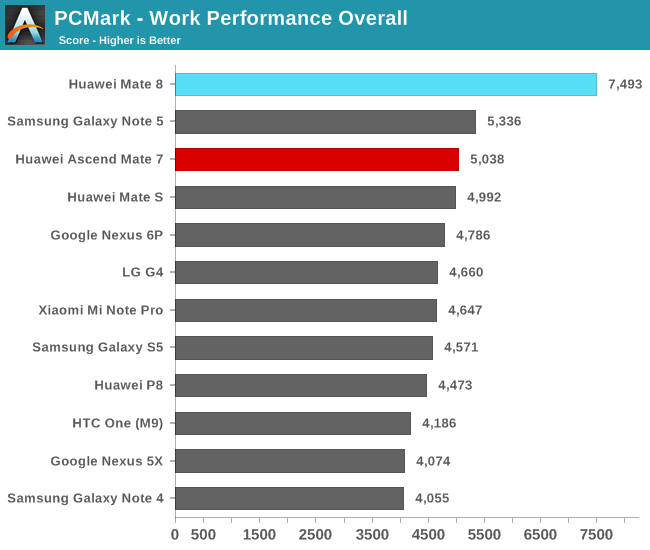 Overall the Mate 8 is able to post an absolutely astounding work performance score in PCMark. The reported score also correctly represents my experience with the device as it is by far the fastest Android phone I’ve ever used. This represents an impressive showing from Huawei that can’t be understated – I was expecting the Kirin 950 to perform well, but we saw a lot of surprises on the software side that puts the Mate 8's system performance as the undoubted leader among the competition.