It was just under two months ago that AMD announced the major restructuring of their graphics division, which would see the graphics division made whole once again, more than 5 years after AMD first split it up to better align with their CPU division. Placed under the control of AMD veteran Raja Koduri, it would be the responsibility of Raja and the rest of the Radeon Technologies Group to take AMD’s GPU division in a new direction and to rebuild it after the struggles of the past half-decade.

Today AMD is unveiling the first real initiative to take place under the Radeon Technologies Group banner, and that is a major rebranding of AMD’s GPU drivers and a ground-up replacement of the included control panel. At the same time, as this is the first RTG initiative, AMD and the RTG are using this occasion as their first opportunity to address the public as the Radeon Technologies Group. Typically I prefer to avoid ascribing large efforts to any one person, but in this case I think it’s safe to say that there’s a clear element of Raja making his mark on the RTG, and a desire to show how he is going to run things differently than AMD has in previous years. So for as much as today is about drivers and control panels, for the RTG today is also about the group laying out their plans for the future.

But first, let’s start with the drivers. After 13 years as the Catalyst Control Center – a name that pre-dates the AMD purchase altogether – AMD is finally doing away with the Catalyst branding. In fact, in some ways AMD is doing away with permanent driver branding altogether. Beginning with the next driver release, the Radeon drivers will be known as “Radeon Software.” 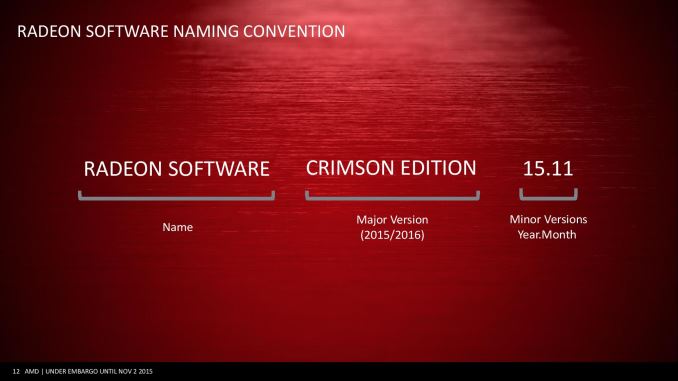 At the same time, similar to projects such as Ubuntu Linux and Android, AMD will be introducing a codename-like middle name to denote the “major version.” These names, which only fitting for the RTG will all be variations of red, will start with “Crimson Edition” and will change roughly every year as AMD introduces what they consider a new major version of the software.

Finally, AMD will be retaining their existing year-dot-month version numbering scheme for these drivers, which will now indicate what AMD considers minor versions of the software. The end result will be that the full name of a driver release will be along the lines of “Radeon Software Crimson Edition 15.11,” which will be the name of the forthcoming November driver release.

Meanwhile, along with announcing the new name for their drivers, AMD has also clarified their driver release plans over the next year, which will be fairly similar to how things have been for the past year. AMD is aiming to find a balance on WHQL driver releases – not too many and not too few – and have told us to expect multiple WHQL releases per year, likely averaging a release every couple of months. Meanwhile in between those releases AMD will publish beta driver updates as they do now on an as-needed basis. Both AMD and NVIDIA have been wrangling with the desire to balance driver update release schedules with the need to avoid making their non-gaming customers update their drivers every two weeks, and for AMD the solution will continue to be to space out beta releases between major WHQL releases. And no, they tell us, you won’t need to register with them to download the new drivers. 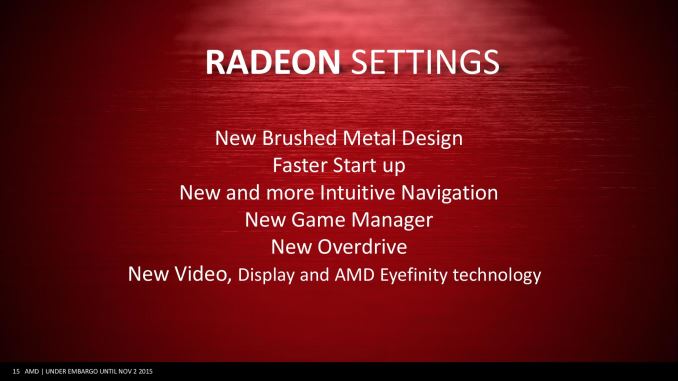 Moving on, launching as part of the first Radeon Software release will be the company’s new control panel, which they are calling Radeon Settings. Radeon Settings will be a ground-up redesign for AMD, with the company ditching the entire Catalyst .NET codebase. In its place AMD has built a new control panel from scratch based on the QT framework (ed: this will only be for Windows, at least for now), with the goal of giving their control panel a rather significant visual overhaul while also addressing load time complaints that go back to the earliest days of the .NET control panel. 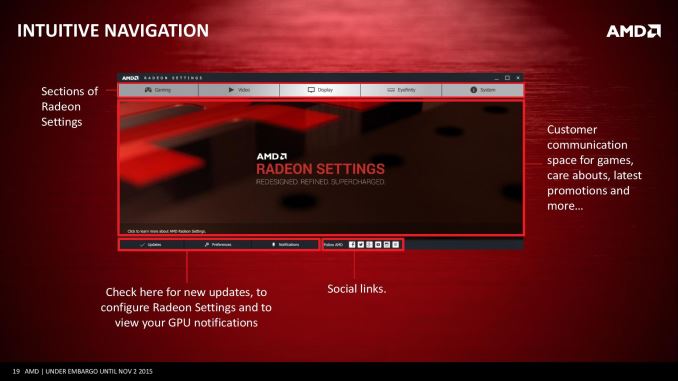 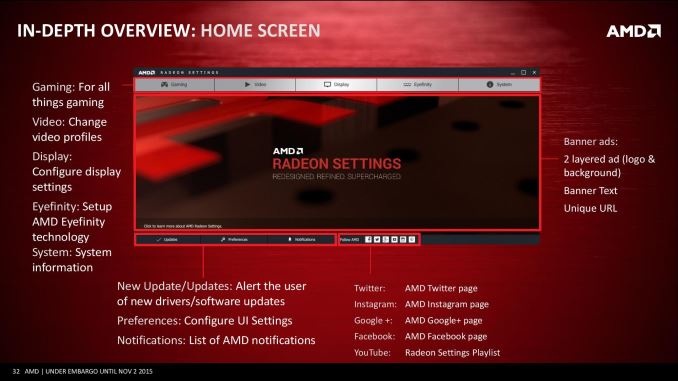 In terms of a visual style, AMD tells us that they are aiming for a much more intuitive design for Radeon Settings, and have brought in a new UI designer as part of the process. From the screenshots AMD has shared with us so far (the press was not given a preview copy ahead of today’s announcement), besides the ever-present use of brushed metal, perhaps the biggest change is that Radeon Settings is wider than it is all, and the overall style is vaguely similar to Windows Metro/Modern with a focus on large buttons as opposed to lists and drop-down menus. It is, if nothing else, much more graphical than Catalyst Control Center is.

As for functionality changes, while feature updates are chiefly the domain of the drivers rather than the control panel, Radeon Settings will bring with it a couple of notable additions for gamers. Along with their existing functionality, per-game settings profiles can now contain individual settings for Crossfire, Overdrive, Framerate Target Control, and the Shader Cache, the first three features previously only being available globally and the latter being a new option entirely. Meanwhile under the Display settings, AMD is adding an Eyefinity “Quick Setup” option that will attempt a best-guess effort to arrange and enable an Eyefinity setup with a single click, allowing users to avoid the longer full setup routine when it’s not needed. Finally, after removing it a couple of years prior due to a security issue, AMD will be bringing back the driver update functionality of their control panel, allowing Radeon Settings to check for updates and to notify the user when an update is found. 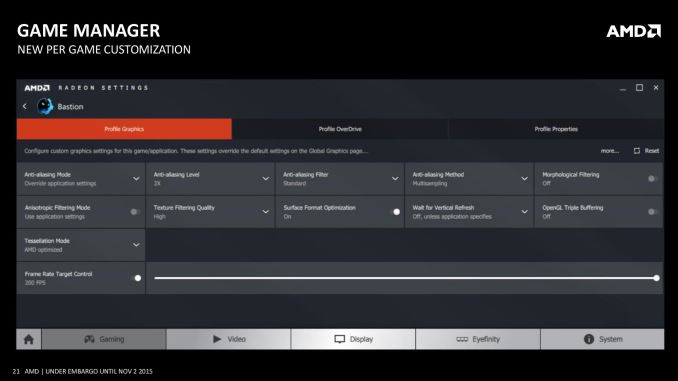 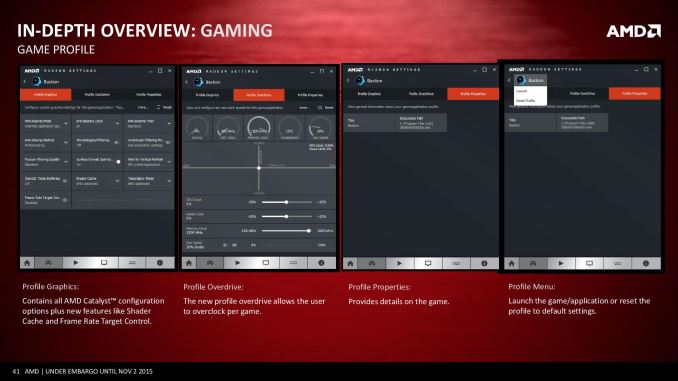 At this point AMD tells us that the first release of the Radeon Software drivers and Radeon Settings control panel will be in Q4. However I expect that we may see it a bit sooner than that, and that AMD is shooting for November while offering a conservative ETA. 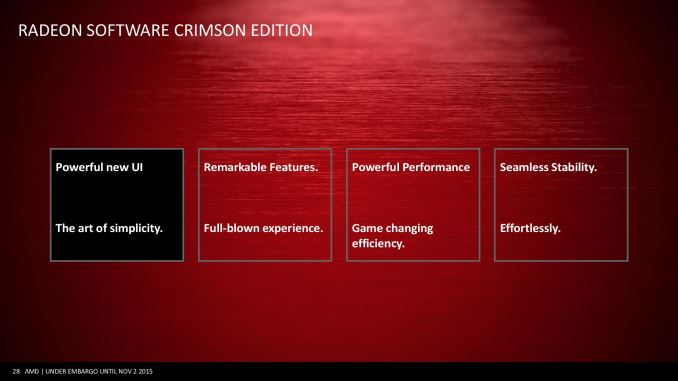 Going forward, AMD has also told us that this will be the first of multiple updates on the Radeon Software, AMD’s developer relations efforts, and the overall Radeon ecosystem. At this point AMD is setting up to execute on a multi-year plan, beginning with what the company feels is a need to be seen as being serious about software. As part of that effort the company is preparing new driver features for users, and though only briefly mentioned in passing, the new Radeon Software will ultimately bring new features for developers as well. In both cases AMD is being tight-lipped at the moment, but the messaging from the company is that they will have more to discuss on the matter later this year.