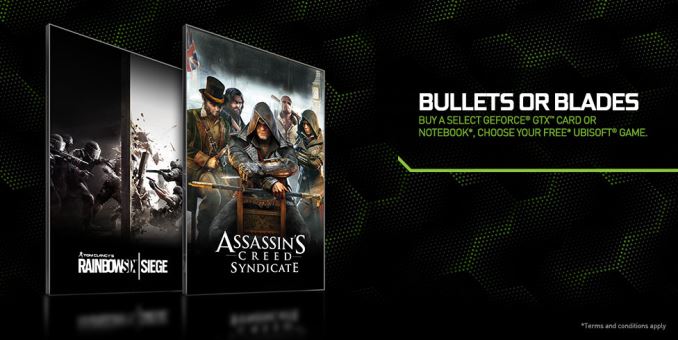 The beginning of last month concluded NVIDIA's Summer GeForce Game Bundle. The months to come bring a rush of big budget games fighting to squeeze in before the holiday season. For many of us new games means a desire for new hardware to play those games on, and in traditional fashion NVIDIA has lined up a new game bundle to coincide with these new game releases.

Launching for the fall is NVIDIA's "Bullets or Blades" bundle. This bundle gives gamers the choice between two of the major titles coming this fall season, Assassin's Creed Syndicate and Tom Clancy's Rainbow Six Siege. Assassin's Creed Syndicate will be the latest iteration in the long running and acclaimed series, and this time features a pair of twins working their craft in the historic streets London, England during the industrial revolution.  Tom Clancy's Rainbow Six Siege brings sieges into the classic Rainbow Six formula, allowing enemies to transform their environment into a modern stronghold, with the further addition of destructible environments to alter how players go about breaching defenses. Furthermore both games have received GameWorks enhancements, though NVIDIA hasn’t specified which effects libraries are being used in either game.

This bundle is available to purchasers of the GTX 970, GTX 980, GTX 980Ti and notebooks purchased with a GTX 970M or higher, which would include the GTX 980 for notebooks that we just covered a couple of weeks ago. Of note this bundle doesn't include the GeForce GTX Titan X, and meanwhile NVIDIA's existing Heroes of the Storm bundle for the GTX 960 and GTX 950 is unaffected.

Those wishing to participate are encouraged by NVIDIA to check the product description of the item they are purchasing to ensure that the seller is participating in the "Bullets or Blades" GeForce GTX bundle, as NVIDIA cannot provide codes and coupons for purchases made at non-participating retailers and e-tailers. Per the terms and conditions this bundle is valid in all regions excluding China and will be running from today (October 6th, 2015) until December 15th (or "while supplies last") and the game codes will expire on December 31st. Assassin's Creed Syndicate will be coming to PC on November 19th and Tom Clancy's Rainbow Six Siege will be released on December 1st.