Moving on towards our more GPU-bound workloads, we use our standard test suite of benchmarks like GFXBench and 3DMark to get a good idea for performance. Unfortunately, due to the move to iOS 9 the Unity engine version used in Basemark X is no longer working so for now we’re left with 3DMark and GFXBench. There is also Basemark OS II’s graphics test, but this is embedded in a larger benchmark with CPU and storage performance tests. 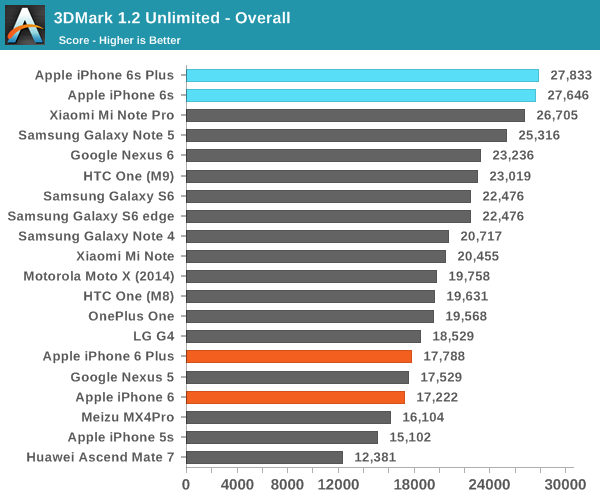 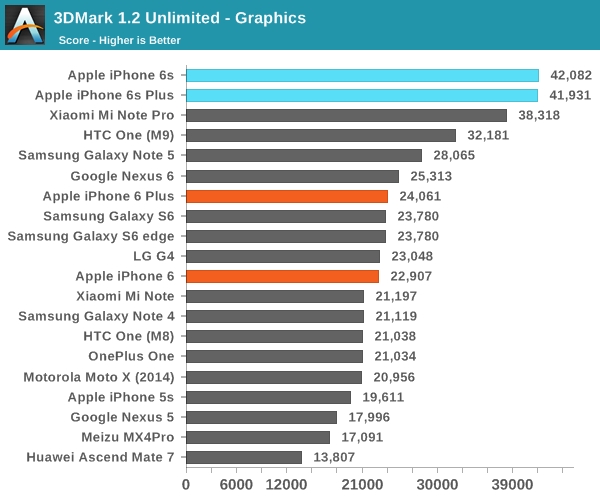 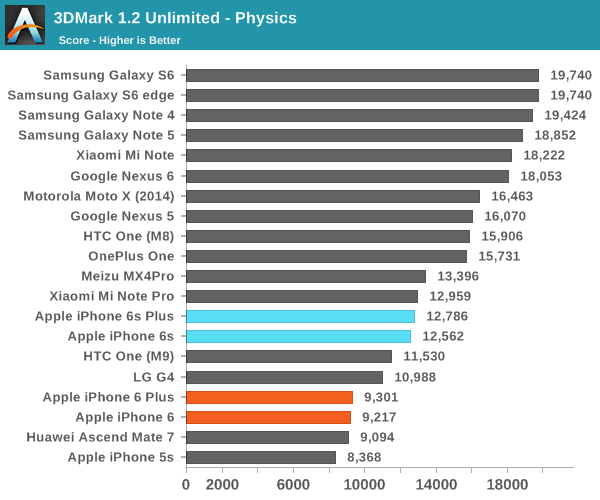 As always with 3DMark, there are some issues in the data structures used. Due to the data dependencies present within the physics test, it is necessary for the CPU to stall for data to be committed to memory before continuing on to the next portion of the test instead of executing instructions in parallel. This strongly reduces the practical performance of the CPU because the architecture is primarily focused upon instruction-level parallelism to deliver major performance gains. However, due to the strong showing in graphics performance the iPhone 6s’ still manage to take the lead. 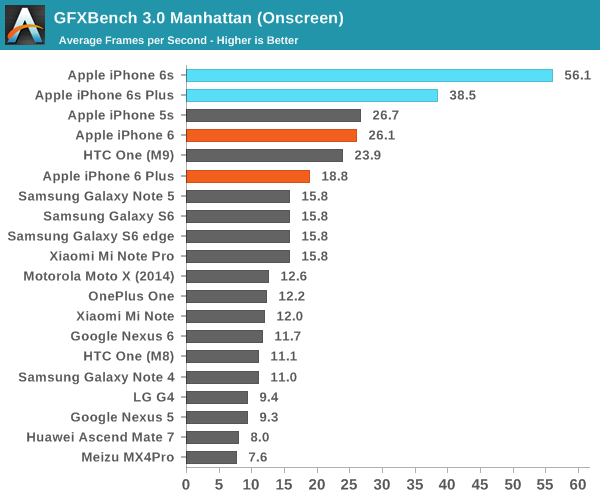 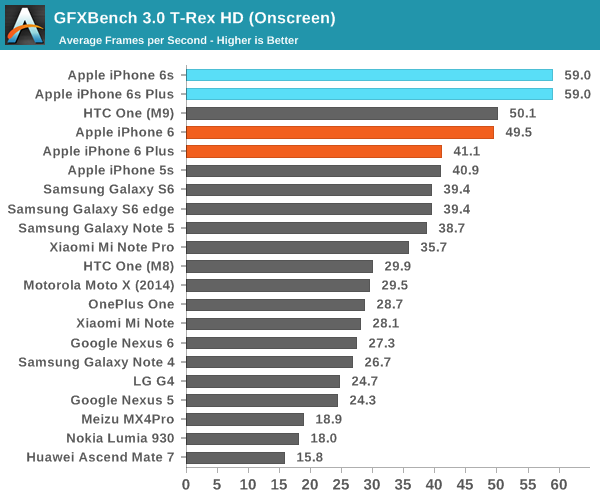 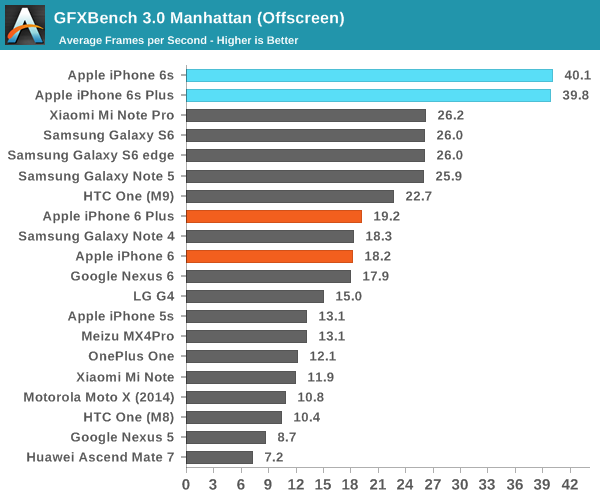 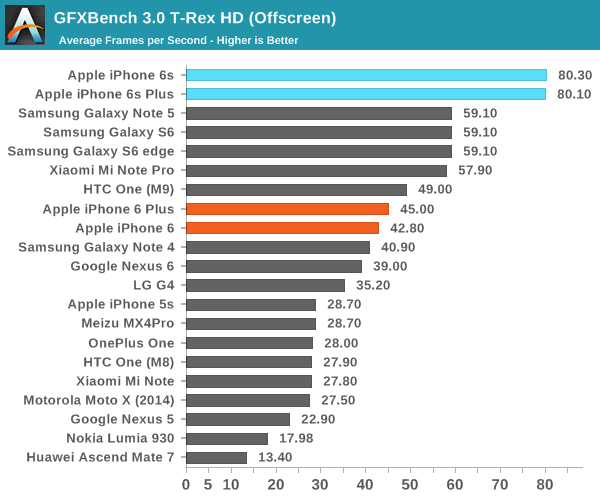 In GFXBench, the A9 SoC just shows absurd performance. It’s strange to think about how the iPad Air 2’s GPU seemed incredibly quick at the time but with the A9 Apple has surpassed that level of performance in their smartphone SoCs. The move to a new generation of PowerVR GPU IP, in addition to the move to a FinFET process node are really the drivers for this kind of performance improvement.

Overall, the Apple A9 SoC is the best SoC in any phone shipping today. In cases like web browsing, gaming, and even just going through the UI it’s quite evident that this new SoC is a major factor in improving performance and smoothness across the board. Something as simple as visiting some popular tech websites will show this, which really goes to show how much “specs” still matter due to their influence on user experience.

At this point is almost goes without saying that storage performance is important, but in a lot of ways the testing here is still in its early days. In the case of the iPhone 6s we’ve discussed what distinguishes its storage solution from others in this industry, but for those that are unaware the iPhone 6s uses PCIe and NVMe instead of a UFS or eMMC storage solution. In a lot of ways, this makes the storage on board closer to the SSD that you might find in a more expensive PC but due to PCB limitations you won’t necessarily see the enormous parallelism that you might expect from a true SSD. In the time since the initial results we've found that all of our review units use Hynix-supplied NAND. In order to test how this storage solution performs, we use Eric Patno’s storage test which allows for a simple storage test comparable to AndroBench 3.6. 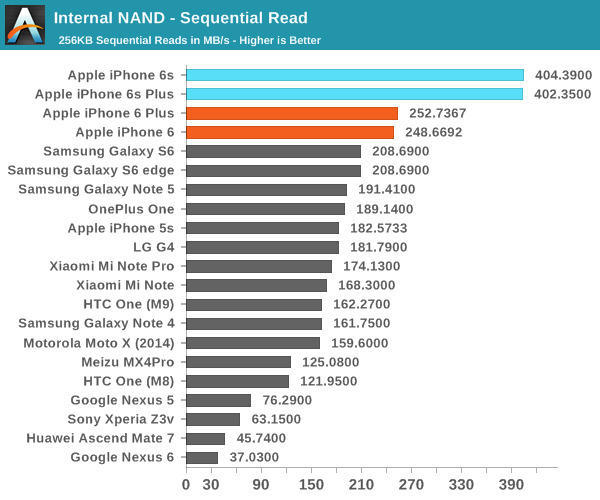 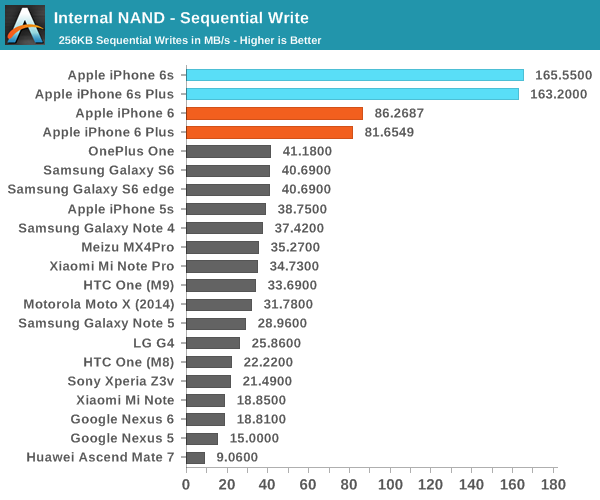 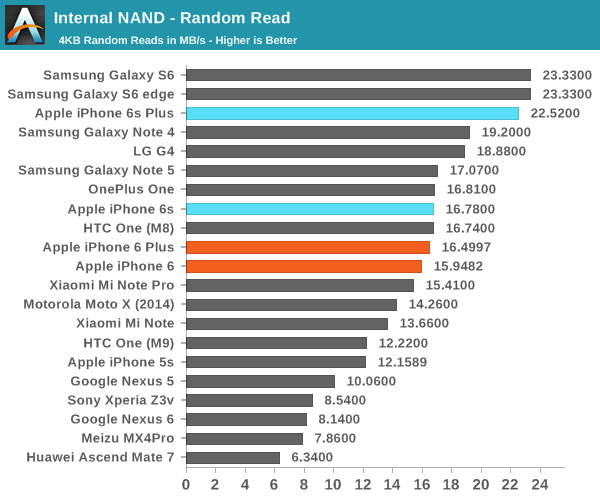 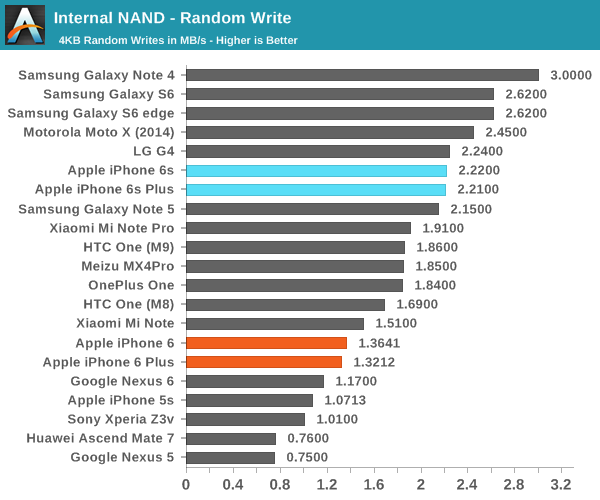 Here, we can really see the enormous performance improvements that result from a combination of TLC NAND with an SLC cache, along with the new NVMe protocol which allows for low CPU overhead and removes architectural bottlenecks to storage performance. This should allow for things like faster burst photos and faster app updates. Downloading and updating apps on the iPhone 6s feels noticeably faster than it is on the iPhone 6, to the extent that small apps feel like they install almost instantly when I’m on a WiFi connection fast enough to saturate storage bandwidth.