iOS has had some level of multitasking for a long time now. iOS 4 introduced the app switcher, along with APIs to allow certain background tasks like audio, location services, push notifications, and task completion. iOS 7 expanded multitasking by allowing applications to perform background updates at certain intervals. None of these features are really multitasking in the same sense as a computer, and they don’t even match the word itself very well because you as the user aren’t able to perform more than one task at the same time. While this is fine on a smartphone, on the iPad it has always felt a bit strange as there’s definitely enough room to run multiple apps at once. In iOS 9 this changes, and the iPad gains several abilities that allow you to truly multitask.

To describe how Apple has enabled multitasking on the iPad it's necessary to go over a brief history of app development on iOS. In the beginning, a developer would create a pixel perfect interface for their application. The reasoning behind this was that there was only one iOS device with the same display size and virtual resolution for many years. The introduction of the iPad introduced another device target which put extra work on developers, but one could argue that iPhone apps being so terrible on the iPad is what pushed developers to make great iPad specific apps anyway. Unfortunately, this method of creating app layouts wasn't very forward thinking, and it didn't allow apps to scale properly to new devices like the iPhone 5, and the iPhone 6. With developers now having to support a number of different display sizes and resolutions it was necessary for Apple to implement a method of designing apps that would work across multiple display sizes. 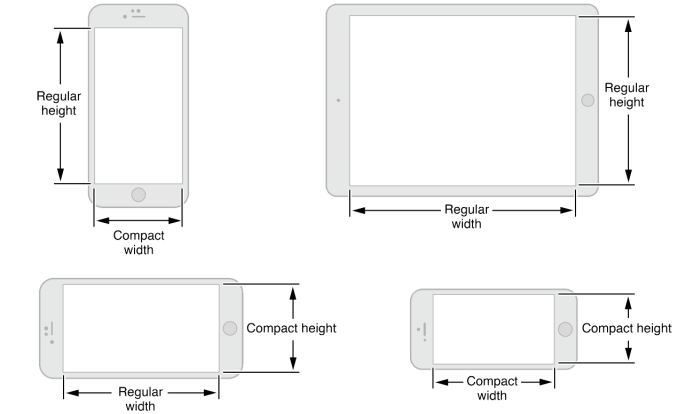 Apple began pushing developers to design applications that would work across multiple displays at WWDC 2014. This involves adopting Auto Layout, which is a method of creating iOS application interfaces that can scale to different screen sizes while still giving the developer a degree of control over the placement of objects by allowing them to create virtual constraints. Auto Layout defines two size classes, which essentially define the attributes of the interface on a certain device based on its resolution and size along a given axis. For example, the iPad always uses the regular size class in both dimensions regardless of its orientation, while the iPhone 6 uses the regular height but compact width size classes in portrait, and both compact size classes in landscape. The iPhone 6 Plus is an interesting situation due to its size, and it uses the same regular size class for its width in landscape as the iPad, which is why you'll see applications that use Auto Layout almost acting like mini iPad apps on it when in landscape mode.

At the time, the recommendation to use Auto Layout made sense for developers who wanted to support every iPhone along with the iPad, as it meant they didn't have to maintain several entirely different layouts for different devices, but could still make interfaces that took advantage of larger displays. At WWDC 2015 it was made clear that Auto Layout was created with additional purposes in mind, with one of them being the multitasking capabilities coming to the iPad.

Before explaining the different methods of multitasking in iOS 9 it’s probably a good idea to explain how you even access the features. Despite what one might think, you don’t start multitasking by going to the recent apps tray. Apple has instead added a new menu which you can access by swiping in from the right edge of the device when inside an application. Rather than showing you all of your open/recent apps, this menu only shows you applications that are compatible with multitasking. To open an app you simply tap it, and to return to the list of apps you swipe down from the top of the open application. To close the menu you can tap elsewhere on the display, or swipe to the right. Something I'd like to note is that this feature does not break the ability to swipe from the right in Safari to go forward a page, as in Safari you need to swipe from the middle of the edge to open the multitasking menu. 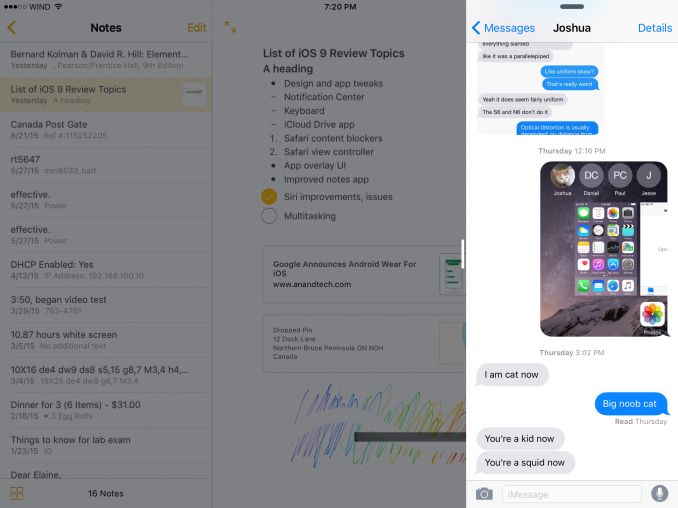 The first aspect of iOS 9 multitasking, and the one I think most iPad users will end up using for device compatibility reasons, is the new slide over feature. This allows you to slide in a compatible application overtop of your current one. This can be really useful for quickly sending a message, or looking up something in Safari while writing a document in Microsoft Office. This may sound very cliché, but it really does transform how you use an iPad just due to how much easier it makes the experience of working on one.

Slide over windows appear in a bar which is the exact same size as the new multitasking menu. They cannot be resized, and I don’t think readers will be surprised to know that the applications have a width of 320 points, or 640 pixels. This is due to what I explained earlier about size classes, and in this case Apple has just decided to use what is, for all intents and purposes, a very long 3.5/4” iPhone app.

The next multitasking feature in iOS 9 is picture-in-picture (PiP) mode. If you’ve ever used Google’s YouTube application then you already have some idea how this works. Essentially, it’s just a floating window that can play video content. At the moment it’s limited to the iOS videos app and video content using the standard HTML5 player (not YouTube) in Safari, but in theory it would eventually be implemented in all applications that play video. To activate the feature you can press the button in the app you’re using which will pop the video out. If you already had the video in full screen then iOS will automatically move it to a PiP window if you switch apps or return to the home screen.

Once you have the PiP window open, it will position itself in one of the display's four corners. If you need to see something underneath it you can either move it or swipe it off to the side where it will just stick out enough for you to move it back on screen. The window will also move with other parts of the interface. An example of this can be seen when the window moves upward whenever Control Center is opened while the window is in one of the bottom display corners. The use cases for a picture-in-picture feature are fairly obvious, and in my case I used it often to watch WWDC sessions while writing parts of this review in Office for iPad.

The last, most powerful, and most exclusive multitasking feature in iOS 9 is split screen applications. The reason I’m discussing this at the end is both because it’s by far the most significant and useful feature, and because the only users who get it are those with the iPad Air 2 and all later iPads. Split screen is essentially an extension of slide over, and you access it by going through the motions of opening slide over and then going a step further by tapping the tiny rounded rectangle next to the multitasking menu. The above video shows you the steps to access split screen view, and some of the specifics of how it works.

Something you’ll notice is that if you have two apps in split screen and you switch to another app the secondary application pinned on the right side will then create a new split view with the new application assuming it supports split screen multitasking. You’ll also notice that unlike the new split view in OS X El Capitan which has a similar interface, you can’t just set any arbitrary split between the two applications. In landscape mode you either get a 50/50 view, or a split with one app taking up 640 horizontal pixels and the other taking up the remaining space. In portrait orientation you can only add a second app with a 640 pixel width. In both cases you also have 22 lines of pixels taken up by the scrubber between the two applications.

As for performance, my experience with the applications that can be put into split screen has been very good. I've recorded a video showing that there's quite a lot you can do at once with the system still maintaining 60fps motion in all apps. It's worth noting that in this case the PiP window was dropping some frames, but in use cases that don't involve scrolling three different sections and flinging a video around all at the same time the PiP window also maintains its frame rate. On the next page I go into more detail on what resources multitasking requires with Apple's apps, and the potential CPU and memory use that will occur with more intense third party applications.

I often remember a situation a couple years ago where I was trying to watch the Google I/O keynote on an iPad while also keeping an eye on Twitter. It felt completely ridiculous to have to use a phone to view Twitter when there was a 9.7" 2048x1536 display sitting in front of me, but that was just how things worked on the iPad at that time. In my view, the addition of multitasking just puts the iPad experience even farther ahead of other tablets. Obviously Windows has a similar implementation, but the unfortunate truth is that the Windows tablet market is almost non-existent at this point outside of the Surface lineup.

As for Android, part of me is surprised that Google actually allowed Apple to beat them to it when Android applications would be able to handle it without any developer modifications at all. It's unfortunate to say this but the other part of me isn't surprised at all, as it feels like improving Android as a tablet OS just isn't a priority at Google. New features like multitasking coming to the iPad just makes it even more difficult to recommend higher end Android tablets with there already being issues like the app gap and lacking performance. Based on the multitasking code present in the early previews of Android Marshmallow I suspect that this is on Google's radar, and for the sake of having some degree of competition in the tablet market I hope this isn't something unique to the iPad for long.

To wrap things up, I really feel that split screen multitasking is the best feature to ever come to the iPad. The boost it provides to productivity is difficult to put into words. If you’re working with productivity apps you can now easily transfer text and images between the two without having to continually switch between two full screen apps. You can also pin the messages app to the side if you’re carrying on a conversation while also trying to write a note or edit a photo. It’s just really great, and the interface is implemented in a very smooth, natural, and intuitive manner.