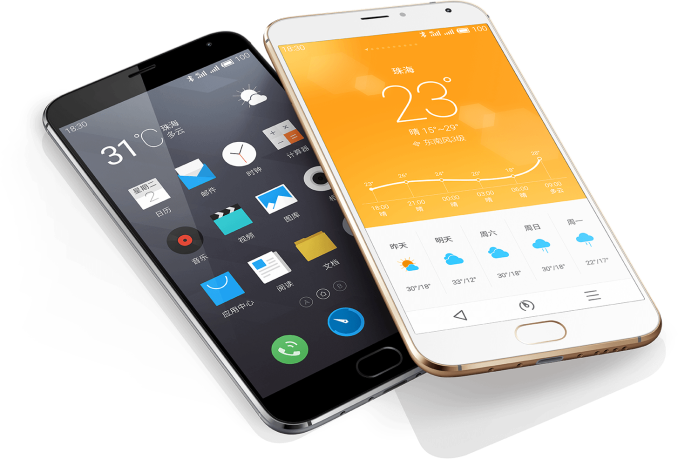 Today at Meizu's event in China the company presented their new flagship phone, the MX5. The MX5 is the successor to the MX4 released last year, and while I haven't been able to review that unit yet, I did take an extensive look at its bigger brother, the MX4Pro.

The MX5's biggest characteristic is the change in display technology. Meizu has now adopted Samsung's AMOLED screen in place of the traditional LCD technology. This also leads to a change in form-factor as now Meizu had to abandon its 16:10 aspect-ratio for the more conventional 16:9 resolutions. At 1080p and 5.5" diagonal, the screen isn't as high resolution as one might have expected and thus regresses in terms of DPI in comparison to the MX4. This is a diamond-structure PenTile subpixel arrangement so the effective resolution is thus even less than the MX4, something one might have to be wary of in a 5.5" phone such as this.

An important metric is power consumption, the MX5 is supposed to use up 40% less power than the MX4's screen, this might point out that PSR is now being employed on the new unit as the MX4 notoriously suffered from a lack of the technology. The screen is protected by Gorilla Glass 3.

Meizu continues to employ MediaTek's SoCs in its device as we see the MX5 use a new Helio X10 / MT6795. This is a successor to the MT6595 which employed A17 and A7 cores in a big.LITTLE configuration. I was fairly impressed with the performance and battery life of the MT6595 itself, while I'm sort of doubtful the new A53 cores will be able to outperform it in real use-cases, it should still work very well and also improve battery life for the new device. The MX5 comes with a standard 3GB of LPDDR3 memory.

Due to the screen's change in aspect ratio, the MX5 is 6mm taller than the MX4, although width has gone down 0.5mm and the new phone is now also thinner at 7.6 instead of 8.9mm - all without sacrificing battery capacity (And likely battery life) as it now actually even gains 50mAh for a total of 3150mAh.

The camera system remains largely the same, but Meizu now uses a better lens system that is supposed to improve quality of the image. This is still a Sony IMX220 20.7MP sensor with an F2.2 aperture lens. What is new is that there's now a laser auto-focus system right under the flash LED, enabling fast-focus for down to 0.2s according to Meizu.

The fingerprint sensor that we've seen on the MX4Pro carries over to the MX5, enabling a variety of OS security functions such as unlocking the device or accessing private folders or galleries on your phone.

The phone ships with Meizu's FlymeOS 4.5 Android 5.0 operating system. The interesting part here is that Meizu announced its plans to open-source parts of the OS and upload them to GitHub for community development. This might attract a lot of enthusiast users as having a modding-friendly device can vastly increase the life-span of a model beyond what the OEM is willing to offer in terms of support.