The Apple Watch, more than any other wearable, presents some enormous barriers for battery life testing. On the smartphone side, testing has traditionally been pretty simple in the sense that you can usually design an app, script, or some other form of automatic test that will run a specified workload. The display is set to not timeout by either an application that adjusts the timeout to an extremely large value or by adjusting the timeout in the settings menu.

Meanwhile for wearables, on Android Wear, testing battery life is generally quite simple, because you still have some control over the timeout settings, you can set manual brightness, and the display automatically turns on when you receive a notification. On Watch OS, exactly none of those things are true. As a result, objective battery life testing of the watch has a number of significant challenges and thus far I haven’t seen any real solution to this problem. We hope to have a standardized battery life test across all wearable OSes in the near future, but for now this section will be purely subjective in nature. 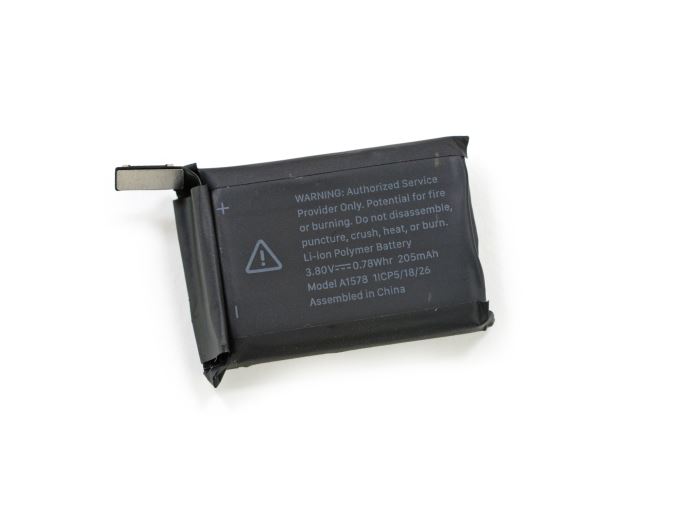 To really sum up battery life on the Apple Watch, it’s definitely more than sufficient. I never recall having battery life drop below 30% in a single day of use. If a day was particularly slow in terms of notifications, I often would end the day with more than 50% battery life, so going two days wasn’t completely impossible. However, in practice I found myself charging the watch every night.

Just by virtue of the glance-based nature of the watch, battery life continues to be far better than the iPhone 6 over the course of the day. I did notice that idle battery life isn’t particularly strong on Apple Watch when wearing it on my wrist, presumably because things like the haptic feedback, fitness tracking, and background sync activities have to be running quite often. Something like reading email doesn’t seem to drain the battery all that quickly, which is also helped by the consistently low average picture level (APL) throughout the UI. However, I would notice throughout the day that the battery percentage seemed to decrease even though I’d go the whole day just checking the time. Given that the workout mode also seems to have a pretty significant workload, I suspect fitness tracking is a significant component of this idle drain.

For a first-generation product on 28nm, this level of battery life is actually rather remarkable as I expected wearables to go through a few generations of somewhat poor battery life before reaching an acceptable point. Although performance isn’t amazingly fluid on WatchOS, it’s definitely more than made up for due to the improved battery life that comes from such a low-power SoC. Roughly speaking, Apple has definitely met their promise of 18 hours of battery life, and arguably exceeded it. Of course, given that there’s no real data here yet opinions may vary widely on whether the battery life of Apple Watch is acceptable.

Although battery life is usually the primary way in which people determine how good a device is at staying mobile, charge time often enters the equation. I’m sure a lot of people have experienced situations in which charge time becomes critical. Traveling will often affect this, as power outlets are fairly rare in airplanes and airports, which means that the time spent at a power outlet needs to be as productive as possible in terms of increasing battery charge. In the case of the Apple Watch, the only option for the average user to charge the watch is with a wireless charger that uses magnets to hold the charger in the correct position on the watch. This wireless charger is fed by Apple’s standard 5V, 1A charger. In order to test this, we monitor the time it takes for the wearable to go from a completely drained state to a fully charged state. 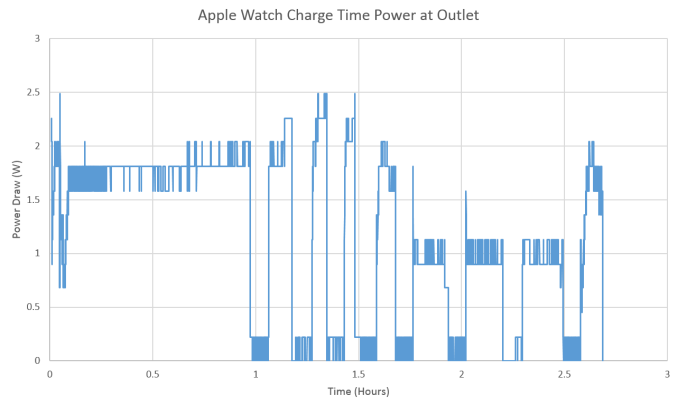 It’s probably no surprise that our test results track relatively closely with listed Apple spec at 2.68 hours. What isn’t listed in the spec is that like every other wireless charger I’ve tested thus far, trickle charging with wireless charging isn’t really trickle charging to the AC adapter. I thought something might have just been off with the Moto 360, but after my experiences with the Apple Watch it’s clear to me that wireless charging behaves differently from wired charging. As a result, it wasn’t unusual for me to wake up 9 hours after putting the watch on the charger and still feel that the watch was quite warm from charging. At any rate, given the need for wireless charging on wearables I suspect that we’re already at the limits for charge rate on wearables for the near future given the increased heat output of wireless charging.

As I’ve mentioned earlier in the review, one of the biggest points of differentiation with the Apple Watch is the use of a brand new haptic feedback system that Apple calls the Taptic Engine. At a low level, this is just a linear actuator, but the system is very different from a traditional linear actuator.

For those that are unfamiliar with traditional linear actuator haptic feedback systems used in smartphones, a voice coil has voltage applied across it, which allows current to flow and generates a magnetic field because the voice coil is an electromagnet. This voice coil acts on a mass, which vibrates in a small cell at a certain frequency. However, in the traditional y-axis configuration of most linearly-actuated feedback systems, the limited length means that there isn’t a lot of room for low frequency vibrations. 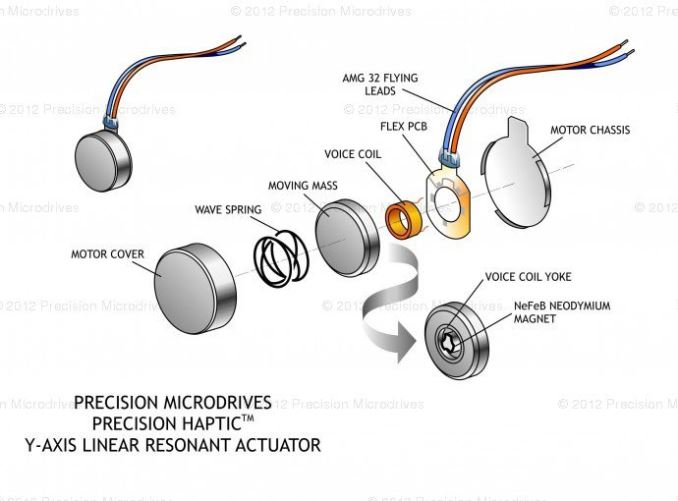 In the case of the Apple Watch, it seems that Apple is using a z-axis vibration motor combined with the speaker. Relative to the PCB on the watch, the weight and the length of travel for the mass is enormous. This inherently allows for much better haptic feedback at lower frequency vibrations. This haptic feedback motor design, combined with the speaker, is what makes up the Taptic Engine. 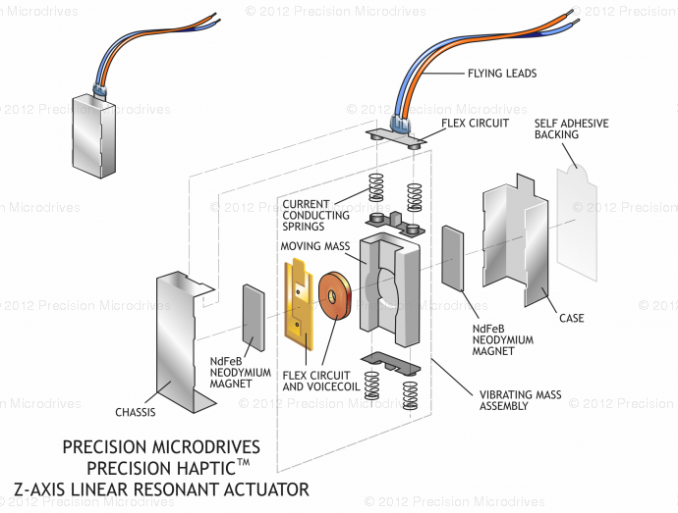 The question now is whether Apple has actually accomplished significant here for the end user experience, and the answer to that is definitely a strong yes. When this feature was first announced, I wasn’t particularly interested in it because I’ve never really been one to pick nits over haptic feedback which is why I never point out a phone’s haptic feedback system as a key point of differentiation unless it’s egregiously poor. However, in the case of the Apple Watch it’s an enormous step up from what one might be used to from a phone because of just how distinct it is. It really feels like someone is tapping me on my wrist when notifications come through, and it’s sufficiently distinct from conventional vibrations that I’ve never failed to miss a notification that comes in, which happens every so often with my phone or even other wearables. 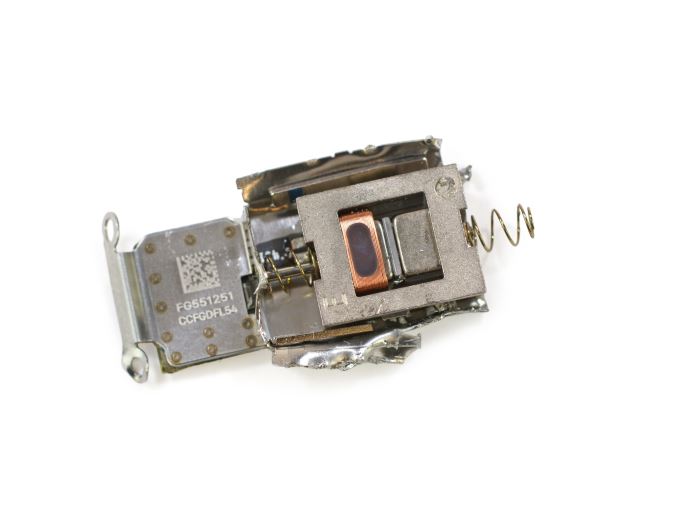 There might be some missed potential here though, as it would be great to have more variation to the vibration patterns to indicate various types of notifications as I usually can’t reliably guess what application a notification came from by the haptic feedback alone. The system is also remarkably quiet compared to vibrations from phones, presumably because the frequency of the noise is relatively low and the watch is strapped to the wrist, which muffles noise. As said before, I normally don’t care enough about vibration feedback to write anything about it, but in the case of the Apple Watch the difference is big enough to be notable in terms of user experience.

As far as I can tell, the speaker is decently loud for relatively quiet environments but it’s easily drowned out by background noise. I also found that I almost never took the watch out of silent mode, as the haptic feedback is enough and audible ringtones definitely lack the relative subtlety that comes just vibrations.

On the receiving side, I was pleasantly surprised by just how effective the microphones are at rejecting noise, as it rejects anything reasonably far away and seems to amplify nearby voices based upon some casual testing of iMessage audio messages. However, Siri seems to struggle a bit with noise rejection and I’m pretty sure that Google Voice Search continues to be faster and less error-prone than Siri when it comes to dictation.

As best as I can tell, Apple Watch currently doesn’t detect sleep states or much of anything around sleep, which is definitely an area of potential improvement as it would be amazing to have an alarm clock that would go off at the end of a sleep cycle to reduce sleep inertia. Sleep tracking in general would be a significant feature if executed well, although this would likely require significant increases in battery life so that an average workload would only use around 40% of the battery in a day.

Meanwhile as far as inputs go, the side button is roughly analogous to the power button on a smartphone, but with a friends list and Apple Pay mapped to the button as well. The Digital Crown is roughly analogous to a home button, but with a scroll wheel attached. In my experience, the Digital Crown isn’t manipulated with a twisting motion, but a sliding motion with a single finger similar to a scroll wheel.

Handoff works well with the iPhone, although it’s often difficult for me to remember to swipe up to activate Handoff when TouchID makes phone unlock almost instant. You are still able to use handoff via the multitasking drawer on your iPhone, but that requires a number of extra steps that can be slower than simply opening an app and navigating to where you need to be. I also find it a bit odd that Apple Watch doesn’t have a multitasking interface like iOS does, but given how rare it is that I attempt to switch to another app with the use of the double press interface I suspect that this is more of a fast app return switch than a multitasking switch. 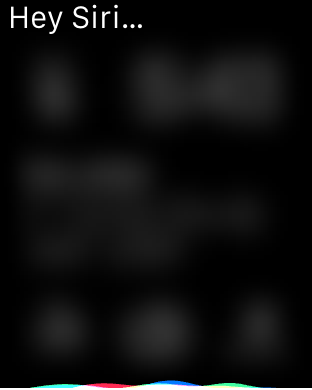 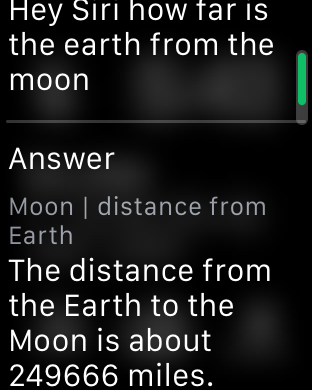 Finally, "Hey Siri" works well in terms of activation, but it's really kind of disappointing that the hotword detection doesn't work with the display off. I suspect this is due to power requirements as I haven't seen any other wearable have screen-off hotword detection, but it would definitely be great to see such a feature in the future.