Continuing on to the display, we find a JDI manufacured 5.2" IPS-Neo screen together with a NovaTek NT35695 display controller IC that also saw use in various devices among also the HTC One M8. IPS-Neo promises increased contrast ratio over traditional IPS displays, and we've already confirmed this claim in the Huawei Mate 7 which also used a similar type of display.

As always, our display testing is done with an X-Rite i1Pro 2 spectrophotometer as our measurement hardware, in conjunction with SpectraCal's CalMAN software suite and our own workflow to be able to get an accurate display characterization. 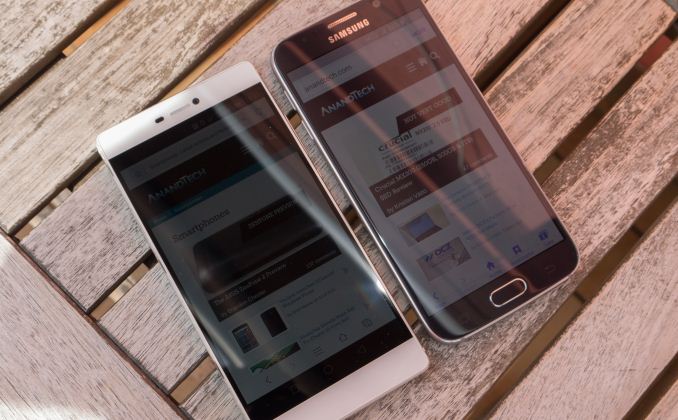 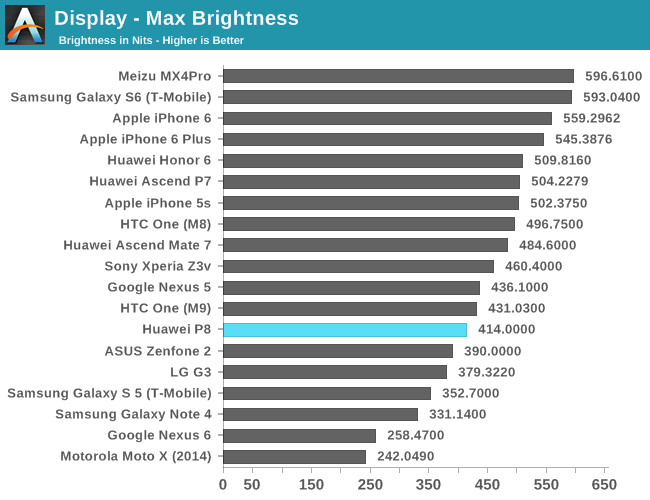 We start off with the maximum brightness of the display: The P8 seems to exhibit itself as one of the more dim LCD devices as it doesn't exceed the 414 cd/cm² mark. Readability on a bright day isn't too fantastic, but still very usable as long as the sun doesn't directly shine on the display.

I noticed a very weird behaviour of the display's brightness that cannot be explained by usual mechanisms such as CABC. The OS clearly alters brightness depending on the application - for example using a browser such as the stock one or Chrome, along with other random applications such as Dropbox or FX Explorer will cause a dimming in the display, if one opens up the recents menu or goes back to the home-screen then one can see how the backlight brightens up. One would think this can be explained with by assuming the default launcher and OS elements are allowed a higher luminosity than other apps, but I've discovered that many other apps don't dim the display.

Huawei's luminance steps are also far from even - there is a noticeable sudden jump from around 200 nits to 350 nits without any inbetween levels. While this poses no real practical issue, it's odd to not see smooth brightness adjustments on a modern flagship such as the P8. 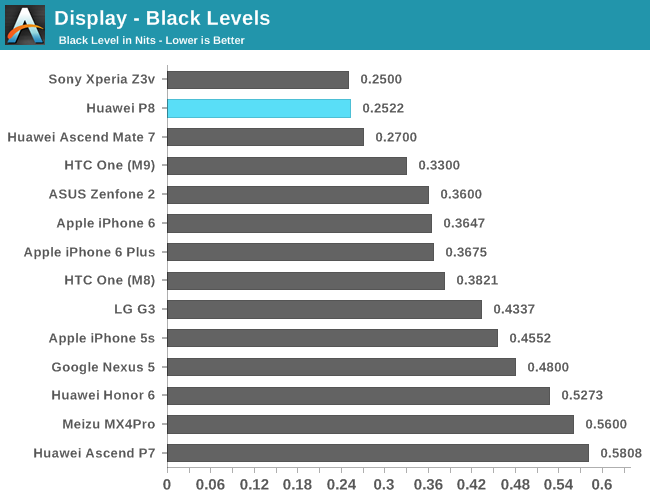 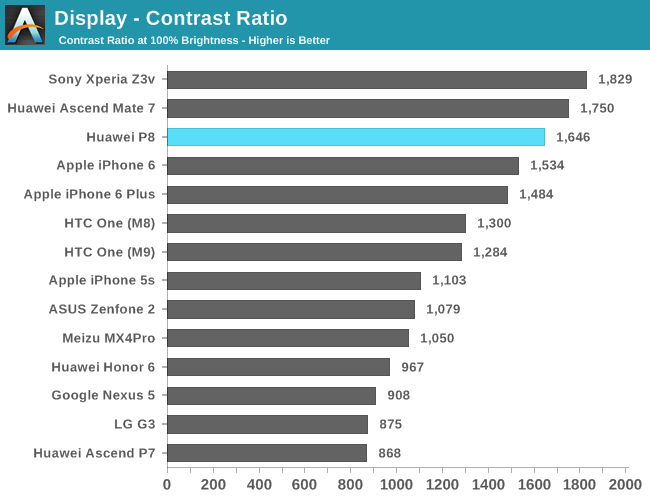 When looking at the black levels, we see the clear advantage of the IPS-Neo technology as the two devices sporting the panels are ahead of other LCD alternatives. As a remark on the graphs: The Sony Z3v makes use of CABC to achieve its high dynamic contrast ratio, as such it doesn't represent the true contrast of the display panel. As the P8 and Mate7 do not employ any APL-dependent brightness controls, they show the panel's true strength.

At maximum brightness, the P8 reaches a contrast ratio of 1646:1, a tad over the 1500:1 that Huawei advertises in its marketing materials. It's on medium brightness though that the display shines, as we see a contrast ratio going up to 2827:1 at 200 cd/cm², as blacks get darker the further away one is from the maximum panel brightness.

The P8 dissapointingly offers no super-low minimum brightness for late-night usage, as it bottoms out at around 10.5 nits, higher than the ~2 nits we've seen vendors like Samsung or Meizu achieve. 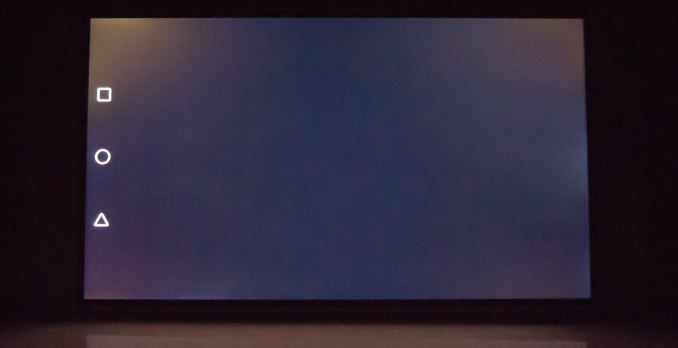 The unit we've received from the London launch event suffered from a very bad case of backlight bleeding. This was especially visible in the bottom left corner of the device where one would notice the uneven luminosity even in normal applications, and this was exacerbated by the fact that the navigation bar has a black background. I suspect this is a build-quality issue, as, funnily enough, squeezing on the frame and edges around the display will actually diminish the backlight-bleed for some time until slowly it reverts back to a state similar as captured in the above photograph. 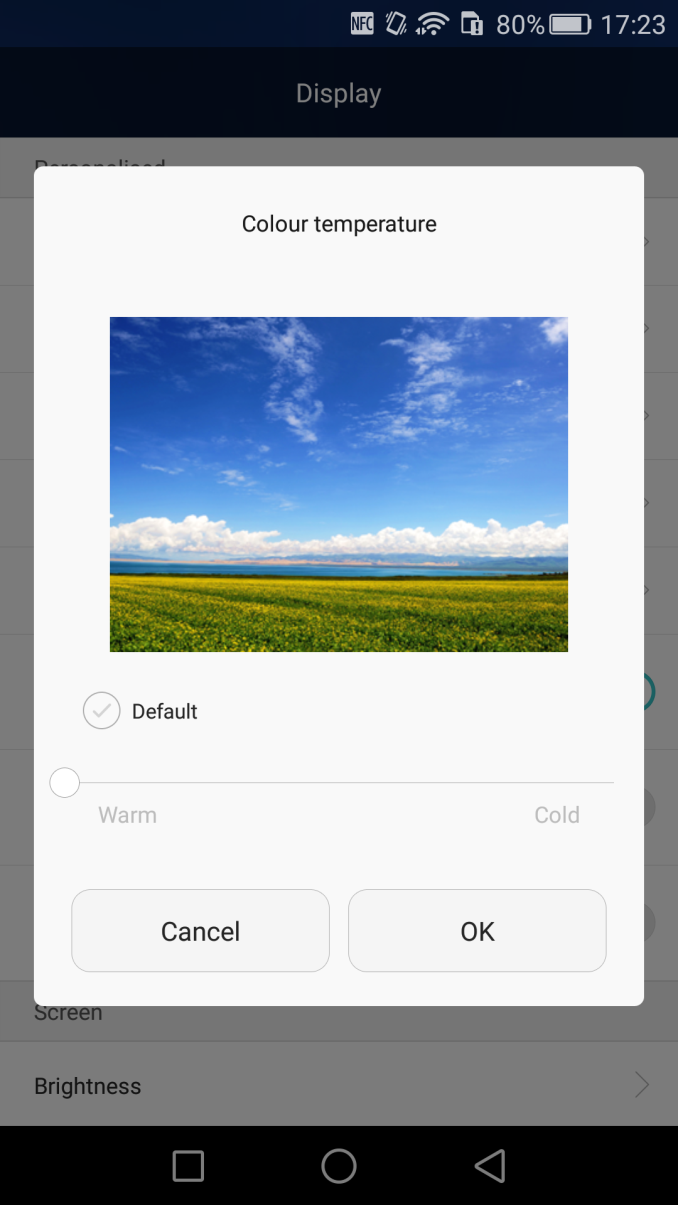 Before we continue on with display accuracy measurements, I want to take a moment to explain Huawei's temperature control mechanism integrated in the OS's system settings. Huawei has long had this feature implemented in previous devices, and we covered it in the Mate 7 review. Choosing the warmest temperature on that device resulted in a mess of a display with a green-dominated white at 6073K, making that setting utterly unusable. The P8 differs strongly from these older devices by offering an excellent calibration when setting the colour temperature slider to the warmest possible value. As this slider offers no discrete setting other than the minimum, default and maximum values, it was previously unreasonable to try to hit a reproducible "accurate" setting. With the P8 now offering this accurate "mode" straight out of the box on the minimum setting, we see it as an equivalent to the "Movie"/"Basic" display modes on Samsung devices, and will thus use it as the de-facto measurement point for display accuracy in this review. For comparison's sake, we also show the "default" setting with which the devices comes set up. 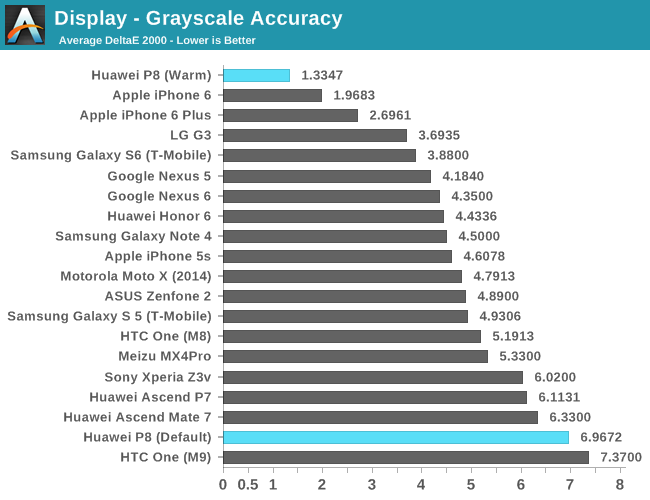 Having cleared up the colour temperature settings and explained how Huawei chooses to expose it to the user, we can see some outstanding results in our grayscale accuracy measurement. The P8 manages to achieve an outstanding deltaE2000 of 1.3347, putting it far ahead of many devices, including Apple's iPhones. Staying on the default colour temperature on the other hand makes the grayscale accuracy degrade from the best to one of the worst devices in our benchmarking database, reaching a deltaE2000 of 6.96. 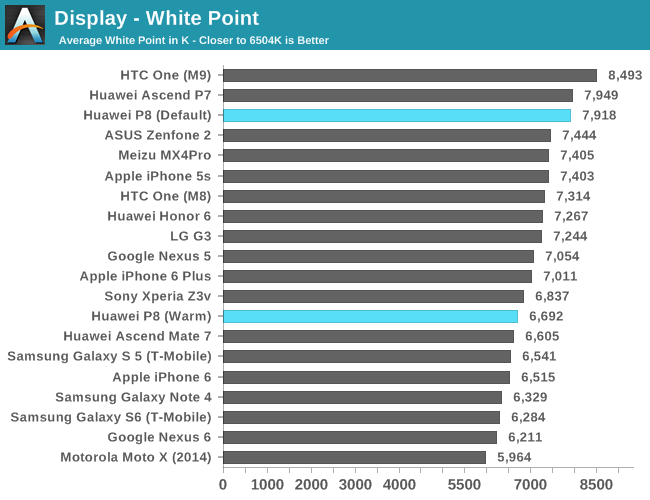 The resulting measured average colour temperature is a tad over the 6504K target, coming in at 6692K. It overshoots a bit toward more colder whites, but that is preferable to having a too warm display. The default setting comes in at a 7918K, a similar target as the P7. To say the least, whites look very blue in this mode.
Moving on to the CIE 1976 chart depicting the main and secondary colour components at various saturation intensities, we get a better idea of how Huawei's colour temperature control works. Applying the cooler default colour temperature will shift all colours towards blue instead of moving the gamut's center (White point) as a correct colour temperature control would do. 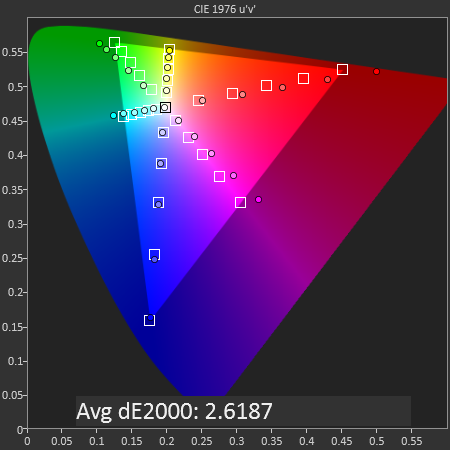 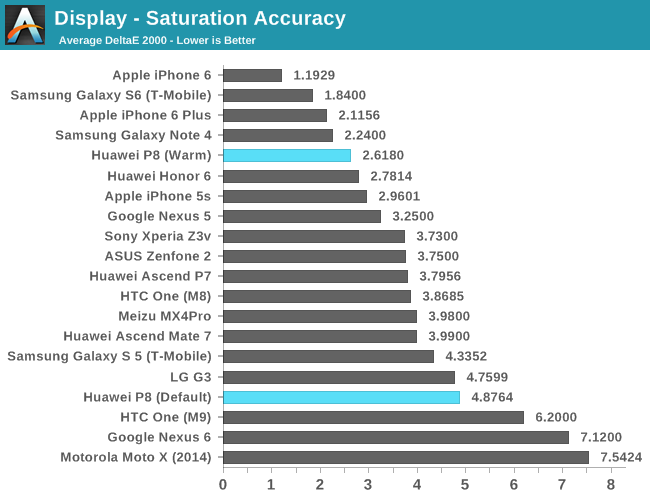 While the altered colour temperature settings helps the P8 achieve a better saturation accuracy metric of deltaE2000 of 2.180 instead of 4.8764, it doesn't match up to the performance we saw in the grayscale accuracy test. The P8's gamut remains too large and veers off from the sRGB targets in the blue and green spectrums. 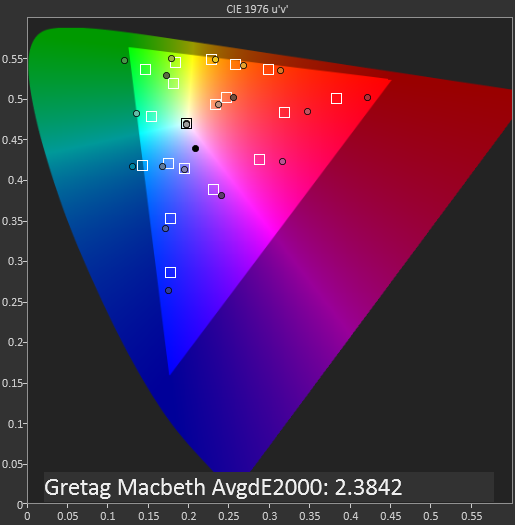 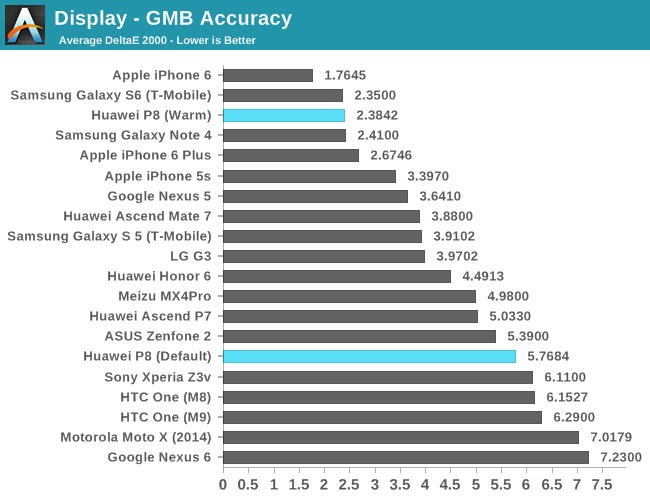 Overall, the verdict on the P8's screen is a bag of mixed feelings. If I hadn't tested the colour temperature slider this would have easily been a very straightforward conclusion to write. The average brightness range of the display together with the problematic uneven backlight and  bad viewing angles would have been enough to deem this as one of the worst displays of this year when tested under the default settings. Fortunately for Huawei they pulled an unexpected rabbit out of a hat and delivered some quite excellent numbers on colour accuracy.

I'm not sure if Huawei implemented this on purpose, or it's a one-off coincidence, but I hope the company continues to offer a calibrated baseline which is easily selectable, through the colour temperature slider or other means such as display profiles. In the end, it's up to the end-consumer to decide what aspect is more important to them as we weigh out the pros and cons of the display.

Measuring the device's luminance-power curve is can be a very useful tool to analyze and estimate the power efficiency of not only the screen, but also the internal components of the device. Althrough I didn't dare to completely dismantle the P8 to get hard readouts through an external power supply, I did manage to fiddle around with the internal fuel-gauge to be able to get some clean numbers that hopefully get near the real thing. 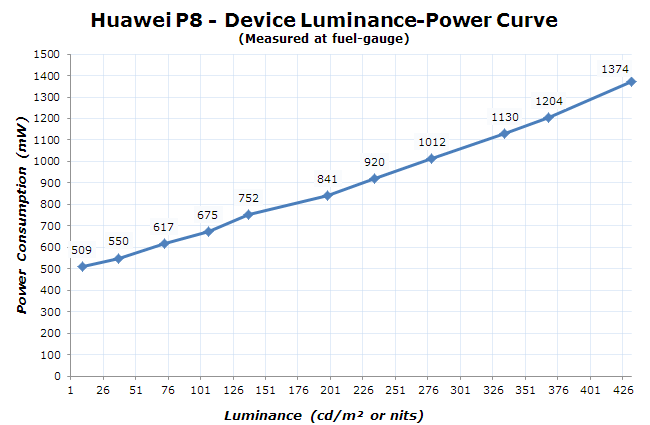 First off, we can see that the P8 is able to reach quite good results at minimum brightness, going down to about 508mW at 10.6 cd/cm². We saw similar data-points from the Meizu MX4Pro which reached down to 530mW at minimum brightness, and the Note 4 which can go down to 440mW on a black screen. The P8 performs well here and points out to good idle power-management and to the inclusion of Panel-Self-Refresh (PSR) through the NovaTek display controller IC.

The maximum power can reach up to 1373mW, and if we substract the idle power from that figure we reach a luminance power load of about 870mW for 433nits, which is in the ballpark of other LCD devices, but for example loses out in efficiency by 100mW at the same brightness when compared to the slightly larger screen of the MX4Pro. Looking at the 200nits point then again fares better for the P8 as it wins with around 340mW versus 356mW for the Meizu, pointing out to different scaling in luminance-power between the two screen technologies.