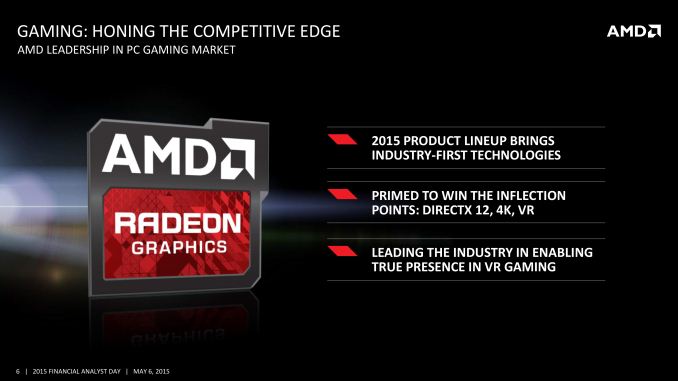 Having just left the stage at AMD’s financial analyst day is CEO Dr. Lisa Su, who was on stage to present an update on AMD’s computing and graphic business. As AMD has already previously discussed their technology roadmaps over the next two years earlier in this presentation, we’ll jump right into the new material. 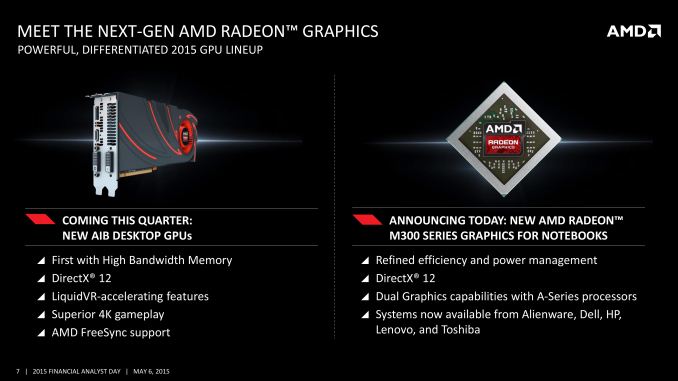 Not mentioned in AMD’s GPU roadmap but now being mentioned by Dr. Su is confirmation that AMD will be launching new desktop GPUs this quarter. AMD is not saying much about these new products quite yet, though based on their description it does sound like we’re looking at high-performance products (and for anyone asking, the picture of the card is a placeholder; AMD doesn’t want to show any pictures of the real product quite yet). These new products will support DirectX 12, though I will caution against confusing that with Feature Level 12_x support until we know more. 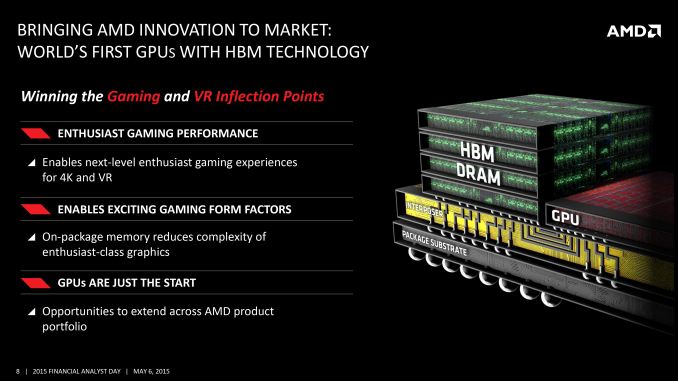 Meanwhile the big news here is that these forthcoming GPUs will be the first AMD GPUs to support High Bandwidth Memory. AMD’s GPU roadmap coyly labels this as a 2016 technology, but in fact it is coming to GPUs in 2015. The advantage of going with HBM at this time is that it will allow AMD to greatly increase their memory bandwidth capabilities while bringing down power consumption. Coupled with the fact that any new GPU from AMD should also include AMD’s latest color compression technology, and the implication is that the effective increase in memory bandwidth should be quite large. For AMD, they see this as being one of the keys of delivering better 4K performance along with better VR performance.

In the process AMD has also confirmed that these HBM-equipped GPUs will allow them to experiment with new form factors. By placing the memory on the same package as the GPU, AMD will be able to save space and produce smaller cards, which will allow them to produce designs other than the traditional large 10”+ cards that are typical of high-end video cards. AMD competitor NVIDIA has been working on HBM as well and has already shown off a test vehicle for one such card design, so we have reason to expect that AMD will be capable of something similar. 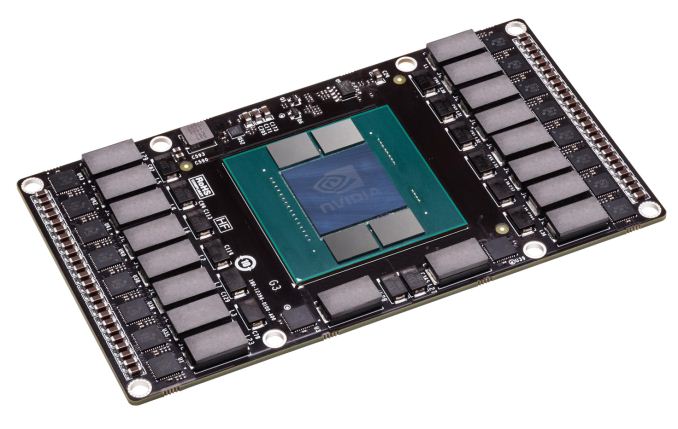 Finally, while talking about HBM on GPUs, AMD is also strongly hinting that they intend to bring HBM to other products as well. Given their product portfolio, we consider this to be a pretty transparent hint that the company wants to build HBM-equipped APUs. AMD’s APUs have traditionally struggled to reach peak performance due to their lack of memory bandwidth – 128-bit DDR3 only goes so far – so HBM would be a natural extension to APUs.