When NVIDIA introduced the original GTX Titan in 2013 they set a new bar for performance, quality, and price for a high-end video card. The GTX Titan ended up being a major success for the company, a success that the company is keen to repeat. And now with their Maxwell architecture in hand, NVIDIA is in a position to do just that.

For as much of a legacy as the GTX Titan line can have at this point, it’s clear that the GTX Titan X is as worthy a successor as NVIDIA could hope for. NVIDIA has honed the already solid GTX Titan design, and coupled it with their largest Maxwell GPU, and in the process has put together a card that once again sets a new bar for performance and quality. That said, from a design perspective GTX Titan X is clearly evolutionary as opposed to the revolution that was the original GTX Titan, but it is nonetheless an impressive evolution.

Overall then it should come as no surprise that from a gaming performance standpoint the GTX Titan X stands alone. Delivering an average performance increase over the GTX 980 of 33%, GTX Titan X further builds on what was already a solid single-GPU performance lead for NVIDIA. Meanwhile compared to its immediate predecessors such as the GTX 780 Ti and the original GTX Titan, the GTX Titan X represents a significant, though perhaps not-quite-generational 50%-60% increase in performance. However perhaps most importantly, this performance improvement comes without any further increase in noise or power consumption as compared to NVIDIA’s previous generation flagship. 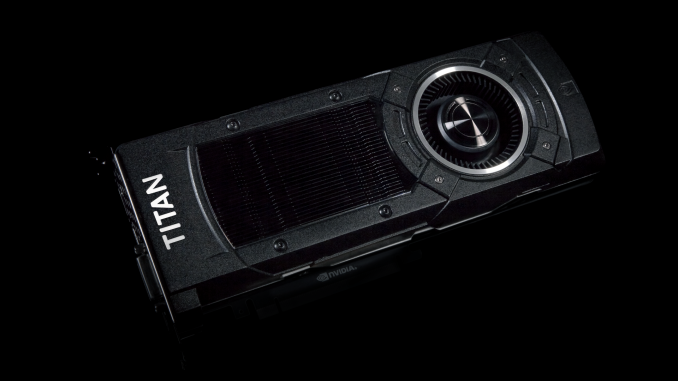 Meanwhile from a technical perspective, the GTX Titan X and GM200 GPU represent an interesting shift in high-end GPU design goals for NVIDIA, one whose ramifications I’m not sure we fully understand yet. By building what’s essentially a bigger version of GM204, heavy on graphics and light on FP64 compute, NVIDIA has been able to drive up performance without a GM204-like increase in die size. At 601mm2 GM200 is still NVIDIA’s largest GPU to date, but by producing their purest graphics GPU in quite some time, it has allowed NVIDIA to pack more graphics horsepower than ever before into a 28nm GPU. What remains to be seen then is whether this graphics/FP32-centric design is a one-off occurrence for 28nm, or if this is the start of a permanent shift in NVIDIA GPU design.

But getting back to the video card at hand, there’s little doubt of the GTX Titan X’s qualifications. Already in possession of the single-GPU performance crown, NVIDIA has further secured it with the release of their latest GTX Titan card. In fact there's really only one point we can pick at with the GTX Titan X, and that of course is the price. At $999 it's priced the same as the original GTX Titan - so today's $999 price tag comes as no surprise - but it's still a high price to pay for Big Maxwell. NVIDIA is not bashful about treating GTX Titan as a luxury card line, and for better and worse GTX Titan X continues this tradition. GTX Titan X, like GTX Titan before it, is a card that is purposely removed from the price/performance curve.

Meanwhile, the competitive landscape is solidly in NVIDIA's favor we feel. We would be remiss not to mention multi-GPU alternatives such as the GTX 980 in SLI and AMD's excellent Radeon R9 295X2. But as we've mentioned before when reviewing these setups before, multi-GPU is really only worth chasing when you've exhausted single-GPU performance. R9 295X2 in turn is a big spoiler on price, but we continue to believe that a single powerful GPU is a better choice for consistent performance, at least if you can cover the cost of GTX Titan X.